27 children among 30 killed as school bus plunges into gorge 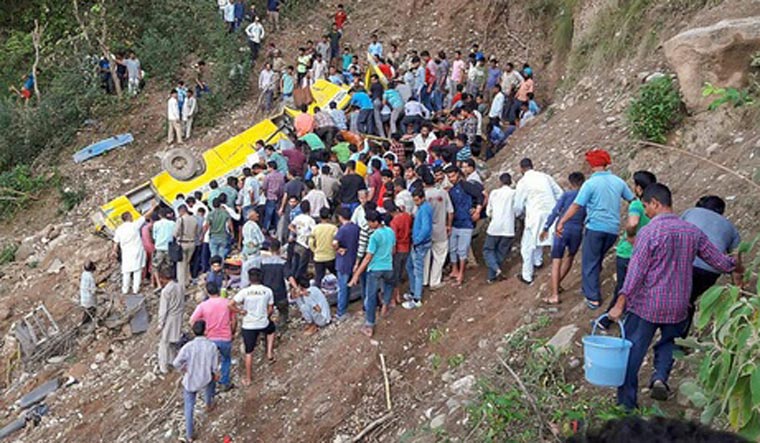 Twenty-seven children were among 30 killed when a school bus ferrying them back home plunged into a deep gorge near village Gurchal on the Nurpur-Chamba highway, about 100km from the district headquarters at Dharamsala.

Local BJP MLA Rakesh Pathania, who was on the spot, said 27 bodies were recovered while two more had been spotted.

At least 13 seriously injured persons were rushed to a hospital in Pathankot where one of them succumbed to injuries, an official said. The condition of other injured persons was also critical, he said.

The bus was carrying 40-45 people and most of those killed were students of elementary classes, aged below ten.

Chief Minister Jai Ram Thakur announced an immediate relief of Rs 5 lakh to the next of kin of each deceased.

A magisterial probe was ordered and preliminary enquiries suggested the accident occurred as the driver lost control over the bus which veered off the road and fell into a deep gorge, an official said.

A pall of gloom descended in the area as wailing parents rushed to the spot on hearing the news. Food and Supplies minister Krishan Kapoor was among the senior state functionaries at the accident site to supervise rescue operations.

The bodies were extricated from the rubble with the assistance of local youth.