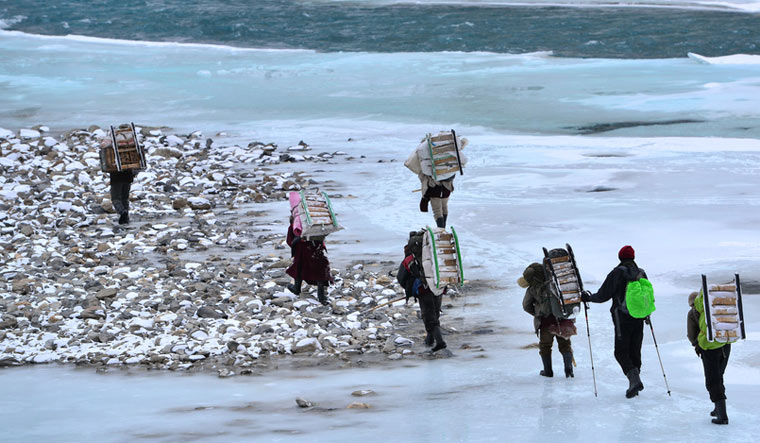 Acknowledging the importance of tasks carried out by local civilians, who have been hired by the Army as porters in difficult terrains for the carriage of its stores, stocking of posts, collection of water, replenishment of ammunition, clearance of tracks, and evacuation, the Army headquarters has finally come out with policy that gives them better pay, medical facilities and enhanced compensation.

Annually, northern and eastern command of Indian Army hires around 12,000 civilians as season porters, but there is no prescribed policy for employing them.

Now, the new policy, notified last week, prescribes terms and conditions for hiring of seasonal porters by the Army. According to the policy, porters will be hired to enhance the operational efficiency of the Army by transporting stores, stocking for posts, collection of water, stockings and replenishment of ammunition, and snow clearance among others.

The hiring of porters will be carried out through district labour officers of the state government employment exchange, and will be paid Rs.18,000 per month as wages. There will not be any additional allowances, except compensatory wages upto Rs. 8,000 based on altitude, degree of difficulty and risk involved in the task.

"They are allowed for Army medical facilities during the period of engagement. And in case of death of seasonal porters on duty, compensation will be paid as per government rules. Moreover, 10 per cent of total vacancies of multi-tasking staff in a year shall be fixed for the recruitment of porters in different establishment of Army in norther and eastern command," The Army policy stated.

Army's policy came in the backdrop of a verdict by the Supreme Court last year on a plea of 29 persons engaged as porters in the Indian Army who complained that they have not been treated as regular employees, and have been denied the benefit of minimum pay scale despite long years of service in arduous conditions prevalent in a difficult terrain.

In high altitudes of the north and northeast, the porters trudge along with their mules, ponies and donkeys in terrains inaccessible to any other form of transport.

While delivering judgement, the apex court bench stated that "the value addition which they provide to the Indian Army in terms of their knowledge of conditions makes them a sure-footed ally in hostile conditions. To look at their work from a metro-centric lens is to miss the wood for the trees. They work, albeit as casual labour, for long years with little regard to safety.”

Court also stated that, “faced with disability, injury and many times death, their families have virtually no social security. Such a situation cannot be contemplated having regard to the mandate in Articles 14 and 16 of the Constitution.”