Let there be light: This boy can light up a bulb by merely holding it! 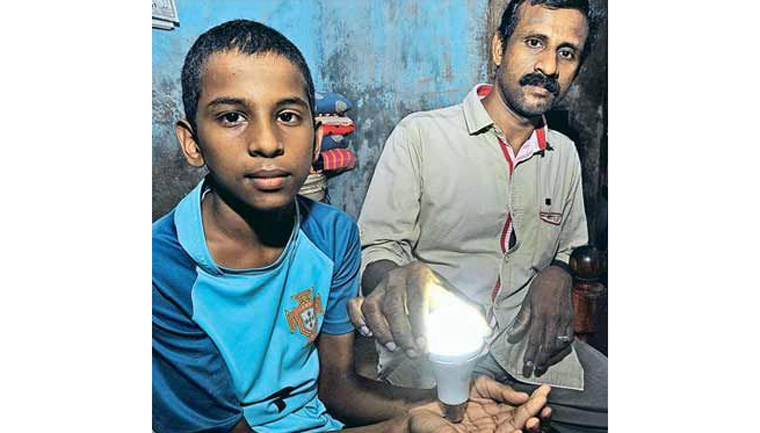 N. Abu Thahir is the latest sensation on social media and the class VII student is not amused by the sudden public glare into a peculiarity of his body.

The boy from Muhamma near Alappuzha, Kerala can light up a rechargeable LED bulb by merely pressing the electrical foot contacts to his body.

Thahir's bizarre ability was spotted by his father Nizar while they were returning home after buying a rechargeable bulb. The moment Nizar handed over the Rs 450 bulb to his son, it lit up. Nizar thought it was a prank but he was surprised to see the same results when he pressed the bulb against any part of his son's body.

An expert said that Thahir's body might be acting as an electrical conductor because of its high salt content.

“People who sweat more usually have a high salt content could conduct electricity. The salt content increases the skin’s conductivity. This could explain why an LED bulbs lights up when pressed against Thahir's body,” said Joshy K. Kuriakose.

Thahir cannot light up just any bulb. Only rechargeable LED bulbs light up when in contact with his body. The electrical foot contacts at the bottom of the bulb have to touch his skin. The boy’s entire body will heat up when the bulb is pressed long enough.

“If you connect the two leads of the rechargeable bulb with a wire, it will light up. Thahir’s body is conducting electricity like a wire,” Kuriakose said.

Back in Muhamma, Thahir is lying low. He is a bit embarrassed by his celebrity status. Enamoured by the self-illuminating bulb, his aunt shot a video and posted it on social media.

The student of the A.B. Vilasam School has two more exams to write before the summer vacation sets in. He prefers to stay at home even during holidays. He does not mind conducting electricity, but not fame.