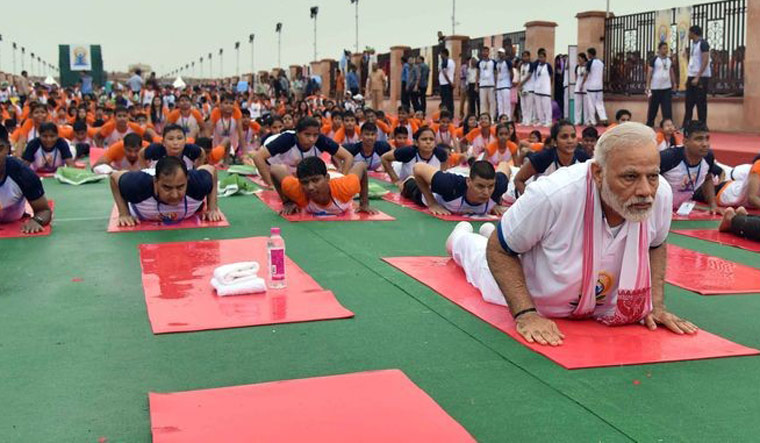 Rahul Gandhi might have mocked Prime Minister Narendra Modi's yoga obsession at the AICC's Plenary Session on Sunday, but the Central government is determined to put its best foot forward on yoga. It is even considering developing yoga grams or yoga villages, which, we are told, would be modelled on Kerala's yoga villages.

"The Kerala government has managed to develop these as a successful model. The AYUSH ministry is considering a proposal to develop yoga villages, where one person from each family will be trained in yoga. This proposal is based on the Kerala model," said Dr Ishwar V. Basavaraddi, director, Morarji Desai National Institute of Yoga, an autonomous wing of the Union ministry of AYUSH.

This year's International Yoga Day, which will be celebrated on June 21, will be hosted by Madhya Pradesh, Rajasthan or Chhattisgarh, all three states that incidentally are going to the polls by the end of the year. "The three states have been finalised as possible venues, and the Prime Minister's Office will decide soon where the event will be hosted," said Basavaraddi.

Last year, the event was hosted in Lucknow where Modi performed yoga with UP CM Yogi Adityanath.

Starting Wednesday this week, Delhi will witness a grand yoga festival with participation from yoga enthusiasts from 16 countries. The plethora of events—such as informative lectures about different aspects of yoga, demonstrations of different techniques and research paper presentations—are being planned as a curtain raiser to the big celebrations in June.

Basavaraddi said that the organisers were expecting a crowd of around 30,000 enthusiasts at the event, to be held at the Talkatora Stadium in New Delhi.