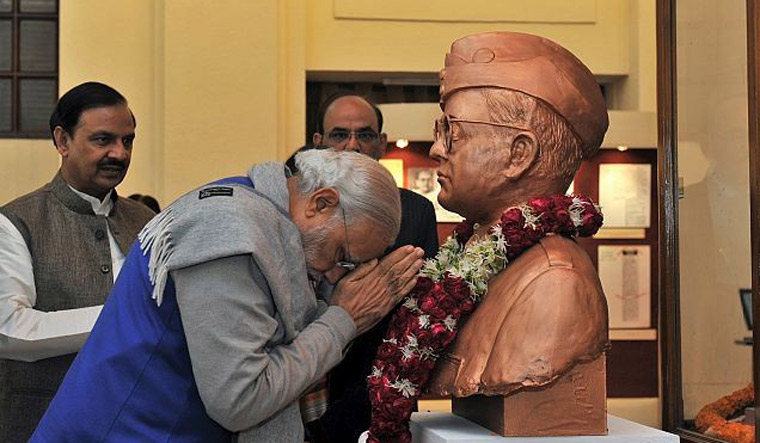 Strong rumours that a certain Gumnaami Baba living in Faizabad, near Ayodhya, could have been Subhas Chandra Bose was ruled out by Justice Manoj Mukherjee, who headed the Mukherjee Commission conducting an inquiry into Bose’s death, after conducting a DNA test in 2004.

Yet, the baba, who was identified later as a criminal on the run after murdering his colleague and who himself died in 1985, till recently had piqued the interest of several RSS groups. It seems that Bose's charisma still has a strong political pull, even seven decades after his death.

Similarly, the Trinamool Congress and the Forward Bloc, during the Vajpayee regime also raked up the issue of how Bose died, making the Centre spend taxpayers' money to set up yet another commission to unravel the mystery surrounding the legendary Indian freedom fighter.

Bose was acknowledged by the Axis Powers as the president of the provisional government of free India, after he hoisted the tricolour in Andaman and Nicobar Islands on December 30, 1943.

Renowned journalist Ashis Ray tries to bring the mystery surrounding Bose's death to a resounding conclusion by presenting 30 years of his research in his latest book, Laid To Rest: The controversy over Subhash Chandra Bose's death (Roli Books, Rs 595).

For over 30 years, Ray had nurtured Bose's death mystery as his personal project. "It is not my opinion on Bose's death," says Ray. And during this period, he got hold of details from 11 different investigations carried out over the last 72 years to confirm Bose's demise. For his research, he travelled to Taiwan, Japan, Pakistan, Russia, Britain and the United States.

He also interviewed six of the seven survivors out of 14 passengers on that ill-fated aircraft carrying Bose, which crashed in Taiwan. A fire killed seven people including a Japanese general who could not survive the crash.

"On midnight of August 18, 1945, Bose died a heroic death at the military hospital in Taipei. He was cremated there and his ashes was then transported to Tokyo Military headquarters, personally carried by a Japanese officer," says Ray.

Among those interviewed by Ray was Bose's fiercely loyal aide-de-camp (ADC) Lt Col Habibur Rehman Khan, who was one of the survivors of the plane crash. Khan also witnessed Bose's last moments at the Taipei military hospital.

He submitted a statement written and signed on August 24, 1945—six days after the crash, confirming Bose's last words to him. Rehman’s statement on Bose’s death could be read at Annexure-3 in the book.

"Prior to his death, he (Bose) told me that his end was near and asked me to convey a message from him to our countrymen to the following effect: 'I have fought to the last for India's independence and now am giving my life in the same attempt. Countrymen! Continue the independence fight. Before long, India will be free. Long Live Azad Hind'," the statement reads.

S.A. Iyer, a cabinet minister of the provisional government, and Ramamurthy, president of IIL in Japan, received Bose's ashes in Japan. Bose's remains were carried in procession to the Renkoji monastery a month after his death, where they still remain.

At Renkoji, after a funeral service, those present requested the head priest at the temple to look after the last remains of the great freedom fighter, till the time proper arrangements could be made to take the ashes back to India.

At the time of his death, Bose was wearing three hats. He was the global head of India Independence League (an overseas organisation founded by Rashbehari Bose, another freedom fighter), president of the provisional government of free India and supreme commander of the Indian National Army (INA).

Finally, some years after India gained her freedom, in 1956, then prime minister Jawaharlal Nehru initiated an enquiry to confirm facts about Bose's death.

Strangely, Bose's Austrian widow Emilie Schenkl and her economist daughter Anita Pfaff had rued the fact that Bose's last desire was to die in a free India, which remains unfulfilled. Pfaff, who has authored the foreword of the book, has been seeking closure over the mystery about her father’s death, and wants a DNA test of the Renkoji temple remains to put an end to the controversy.

"I wrote this book for humanitarian reasons. I was concerned that Bose's widow, who survived for 26 years after his death, died without getting a closure of her husband's death. I felt it was cruel to her," says Ray, speaking of his inspiration to do the book.

Bose's daughter, now 75, has been requesting subsequent Indian governments to bring back Bose's ashes to India. Bose was secular but privately a follower of the Hindu faith, says Ray. "It was her father's last wish to return to the soil of an independent India. She has been seeking Hindu rites and immersion of his ashes in the Ganga."

But the last wish of one of India's most iconic freedom fighters has been ignored by subsequent Indian governments, though they kept on paying Renkoji temple for the upkeep of his remains. A fact, Ray says, indicates that his death was acknowledged by all Indian governments till date.

Narasimha Rao's government made a decision to bring his remains back, but their efforts were sullied by the union home ministry. The Intelligence Bureau under the ministry has been saying that bringing back Bose's remains would result in riots in Kolkata.

"The IB argument is hackneyed, exaggerated and outdated, but has still prevented authorities from bringing back his remains from Japan to India," says Ray.

"If government of India wants to bring back his ashes, it has to be an all-party affair. Bose's death should be seen above politics," says Ray. "On a non-partisan basis, India should honour the man who gave them freedom and whom they have all insulted," he says, emphasising that his book should be read by all rational and sensible people across the world, with an open mind.