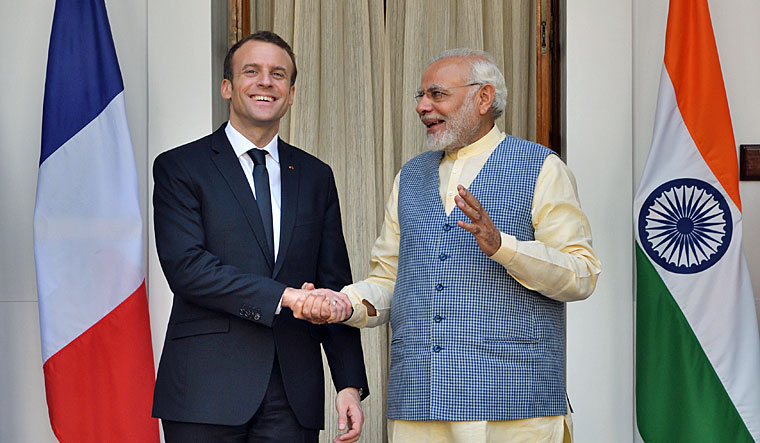 India has inked a deal with France for the reciprocal logistical support between their armed forces. “The agreement is symbolic of the strategic depth and maturity reached in India-France defence ties,'' said the joint statement issued after Prime Minister Narendra Modi's bilateral discussion with visiting French President Emmanuel Macron.

The significance of the agreement is that France has territory in the Indian Ocean region including the Reunion Islands. France also has military bases in several African nations which have a coastline on the Indian Ocean. Djibouti, a tiny country in the Horn of Africa, hosts a strategically significant base, more so because China has recently developed a base there as a part of its String of Pearls vision.

India already has a reciprocal logistical support arrangement with the United States called the Logistics Exchange Memorandum of Agreement (LEMAO). With two million French citizens living in the Indian Ocean region, France has considerable interest in the area, and shares similar concerns with Indian. The two countries affirmed the intention to enhance military cooperation and maintain the operational quality level of joint exercises that they conduct. Varuna, the naval exercise, will begin in India soon and Garuda, the next joint air force exercise will be hosted in France in 2019. They also agreed to enhance counter terrorism cooperation.

Indo-French ties in space cooperation is nearly 50-years-old, much older than their two decade old strategic relationship. Both countries also agreed to launch the third India-France joint satellite mission, TRISHNA, meant for eco-system stress and water use monitoring. India will also accommodate French instrumentation on its OCEANSAT-3 satellite. There are two Indo French collaborative satellites in space at present, Megha-Tropiques and SARAL-AltiKa, both of which are monsoon forecasting and climate monitoring. OCEANSAT-3 will be the third, meant for observation of the oceans through ocean colour and sea surface temperatures. TRISHNA, will be an earth observation satellite based on thermal infrared imaging.

Hoping to scale up the student exchanges, which is a very modest 5,000 Indian students in French universities at present, both countries agreed to mutually recognise each others degrees.

France reaffirmed its support to India for accession into the United Nations Security Council and the Nuclear Suppliers Group, membership to both of which has been on India's wishlist for long. More importantly, though, the two countries stressed on the need to hold accountable those who support or have supported North Korea's nuclear and missile programmes.The two reaffirmed their support for the continued full implementation of the Joint Comprehensive Plan of Action, better known as the Iran Nuclear Deal and said that Iran was complying with its nuclear related commitments. They also agreed that there can be no military solution to the conflict in Syria and that under no circumstances should there be use of chemical weapons there.

While the topic of the nuclear power plants in Jaitapur (a project with French cooperation) was mentioned, there was no fresh development related to this project.