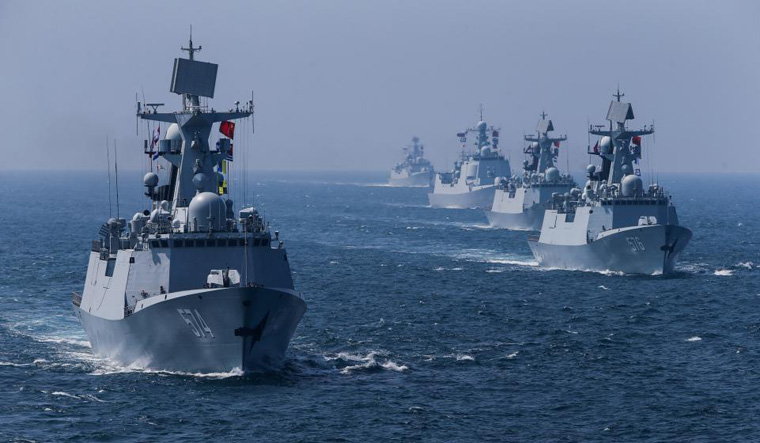 As China has enhanced its presence in the Indian Ocean Region by deploying its submarines, ships and research vessels, Indian government said that the Chinese presence is aimed to project itself as a 'maritime power' in the region.

Minister of State for defence Subhash Bhamre, in a written reply to the Parliament on Chinese military activity in Pakistan, stated that the government has seen media reports in this regard and keeps a constant watch on such developments having a bearing on India’s security and takes all necessary measures to safeguard it.

"Government is aware of China’s stated objective of becoming a ‘maritime power’. As part of this strategy, China is developing ports and other infrastructure facilities in the littoral countries in the Indian Ocean region, including in the vicinity of India’s maritime boundary," Bhamre informed Rajya Sabha. Chinese military has made its strong presence in the Gwadar port in Pakistan and now in Djibouti. However, India is also expanding its presence in the region through Iran's Chabahar port, which India is developing in association with Iran.

According to Indian Navy sources, there has been a noticeable increase in the movement of PLA Navy's warships in the Indian Ocean Region in the name of anti-piracy mission. But the way, Chinese navy is setting up bases in and around the IOR, has serious implications for the security environment in the region. Indian Navy has total of eight warships on mission deployment in the IOR.

Bhamre stated that the Indian government is also aware that under the ‘Belt and Road Initiative’, China is undertaking projects of developing infrastructure facilities in several countries in the region.

While talking about measures, junior minister in the defence ministry said that "India and China have on several occasions reiterated that, as large neighbours following independent foreign policies the relationships pursued by India and China with other countries must not become a source of concern for each other." He also added that "both countries have agreed to display mutual respect and sensitivity to each other’s concerns and aspirations.”

Bhamre further clarified that the government is committed to developing friendly and mutually beneficial relations with all its neighbours under its ‘Neighbourhood First’ policy.

"India is an active economic partner of its neighbours and is involved in various development projects in these countries. India also has extensive ties with neighbouring countries in education, culture, trade and investments as well as defence and security cooperation. India’s relations with other countries stand on their own footing and are independent of the relations of those countries with third countries," Bhamre's statement added.