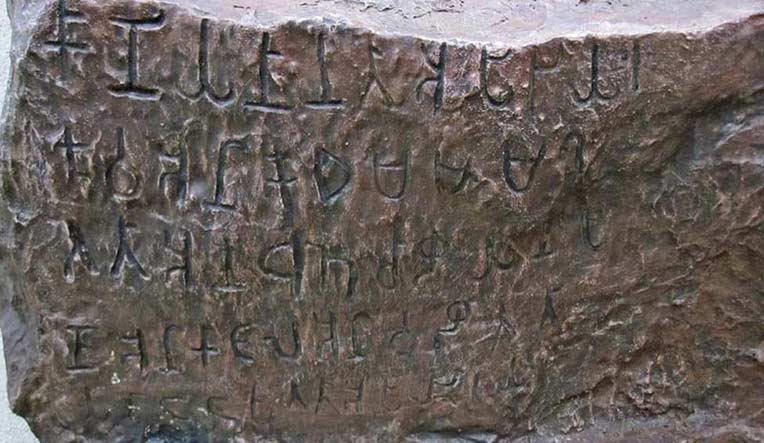 Explanation for Mangulam Tamil Brahmi inscription in Mangulam, Madurai district, Tamil Nadu dated to Tamil Sangam period from 400 BC to 200 AD | via Commons

Prime Minister Narendra Modi revived the 'language politics' when he contradicted a popular myth and said Tamil is older than Sanskrit. Modi even suggested that Tamil be made one of the administrative languages of the Centre.

"Tamil is the oldest language. It is older than Sanskrit and is beautiful. I can only say vanakkam (greeting) and I regret I cannot go beyond this," the prime minister told school students in New Delhi on Friday during his 'Pariksha Pe Charcha'.

Tamil Nadu politicians are, expectedly, jubilant after Modi's comment, with the opposition DMK urging the prime minister to declare Tamil the language of the Madras High Court.

DMK working president M.K. Stalin also demanded allocation of funds on par with Sanskrit for the growth of Tamil.

He further urged Modi to declare Tirukkural, a masterpiece of saint poet Thiruvalluvar which inculcates moral values, as a national book.

Tamil is considered to be one of the longest-surviving classical languages in the world. The oldest documented Tamil literature is over 2,000 years old.

The debate on whether Sanskrit or Tamil is the oldest language has been going on for years. However, it is true that Tamil, along with other Dravidian languages, was considerably influenced by Sanskrit in terms of vocabulary, grammar and literary styles.

Nevertheless, the active resistance from the medieval Tamil authors against the 'Sanskritisation', and the Tanit Tamil Iyakkam (Pure Tamil movement) in the 20th century have caused a  decline in the number of Sanskrit words in common Tamil.

The prime minister's remarks hailing Tamil come at a time when the BJP-led Union government is trying to revive and promote Sanskrit with enhanced funds, drawing flak from various corners, especially from Tamil Nadu, a state which has witnessed strong anti-Hindi movements in the past.

A 2014 article in the BBC quotes DMK leader M.K. Kanimozhi as saying: "Sanskrit is a very Hindu language, it is not used by Christians or Muslims. So, why do you want to impose it on everyone?"