Is a Malaria vaccine the solution to humanity’s deadliest enemy?

'Active surveillance, the key to success, is just not there' 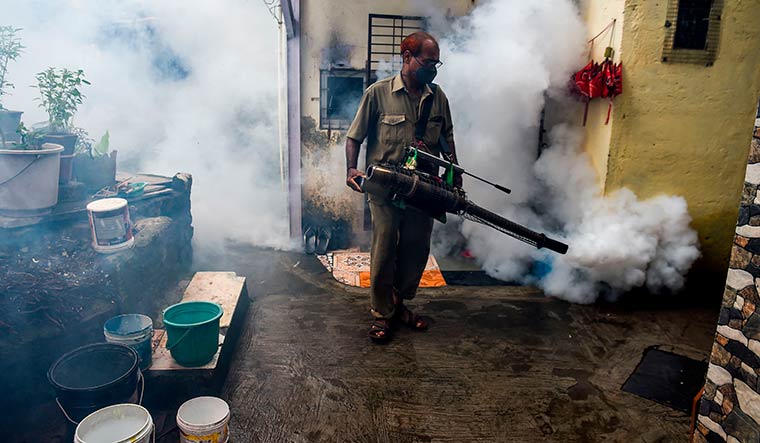 It requires four doses, is recommended only for those aged between 6 weeks to 17 months and packs an efficacy rate of just around 30 per cent: The Mosquirix Malaria vaccine—a variant of a dose first developed 34 years ago in 1987—seems insufficient compared to the dazzling efficacy numbers of COVID-19 vaccines developed in less than a year.

Malaria has killed more humans than anything else in history. In 2019, it killed 409,000 worldwide. The most vulnerable group, children aged under five, accounted for 67 per cent of all malaria deaths that year. And Africa was home to 94 per cent of both cases and deaths.

With this in mind, the World Health Organisation has called for its widespread use among children in regions where P.falciparum infections are endemic. It says its recommendation is based on results from an ongoing pilot programme in Ghana, Kenya and Malawi that has reached more than 800 000 children since 2019.

In India, just 93 Malaria deaths were reported in 2020 and infections have been on the decline—with cases down by 84.4 per cent in 2020 compared to 2015. The Indian government plans to make the country “Malaria-free” by 2030 through the National Framework for Malaria Elimination.

But the idea of Malaria eradication faces daunting hurdles. The National Vector Borne Disease Control Program estimates that around 95 per cent of the population in India reside in malaria endemic areas. Anti-malarial drug resistance is on the rise, jeopardizing the efficacy of first-line antimalarial drugs. And, there is also the problem of undercounting. In 2015, a Lancet study estimated that India suffered around 200,000 Malaria deaths, while the WHO reported just 561 (the WHO has criticised the study for its use of an allegedly unreliable “verbal autopsy approach”).

The problem with developing a Malaria vaccine is compounded by the different stages of the Malaria parasite itself, explains Dr P.K. Rajagopalan, a Padma Shri awardee and founder of India’s Vector Control Research Centre (VCRC).

“A vaccine against a protozoan disease like malaria is not easy to prepare and make it effective, because the different stages of the malaria parasite itself have varying antigenic properties. There are many people working on malaria vaccine all over the world and success has eluded them so far,” he tells THE WEEK.

On the new WHO-touted vaccine, he adopts a wait-and-watch approach.

“Earlier, WHO  had approved vaccines for Japanese Encephalitis and Kyasanur forest disease (KFD) also. But their use in controlling epidemics has yet to be clearly demonstrated. Many institutions are still doing research to improve their efficacy!” he says.

“Regarding the Malaria vaccine, let us see how efficient it is. The main problem [with regard to the] malaria vaccine is that since the immune profile varies differently for different stages of the parasite like sporozoite, merozoite, gametocytes etc, one has to wait and see. In India also, both researchers and government have not shown much interest in Malaria control, since Dengue—and now COVID-19—are priorities.”

Rajagopalan, who began his career as an entomologist in 1953 with the Rockefeller Foundation’s Virus Research Center—which became the National Institute of Virology in 1978—has been critical of the disconnect between anti-Malaria efforts on paper and the ground realities in the field. In a 2019 paper, he lamented the decline in the number of trained entomologists. “Field work in India had long become out of fashion and meant occasional visits to the field, which Barcelato, a Scientist with the Tropical Diseases Research Programs, called Safari research. Apron clad laboratory “Scientists” replaced hardcore field workers. We really need ‘boots on the ground’ attitude of working in the field,” he wrote.

He began his 2019 paper with the lines, “Fighting malaria has very little to do with the intricacies of science and biology. The key was learning to think like the men hired to go door-to-door and stream-to-stream, killing mosquitoes”. This “boots on the ground” advocacy stems from significant experience: Rajagopalan stayed with a field research station for nearly 13 years as part of his work investigating the origins and spread of KFD. And, with his decades-long work fighting Malaria, he lived through the era when the disease was fought door-to-door, with sprays, mosquito nets, and manpower.

But now, however, he feels the infrastructure is lacking. “Active surveillance, the key to success, is just not there,” he writes.

Rajagopalan has often in his writings maintained a profound respect for the ability of the Malaria parasite to survive and thrive, its origins pre-dating that of humanity itself. As the Wellcome Trust Sanger Institue wrote in 2018, “Scientists discovered that the evolutionary lineage leading to Plasmodium falciparum emerged 50,000 years ago, but did not fully diverge as a human-specific parasite species until 3,000 to 4,000 years ago.”

It is a timely warning against over-exuberance in the fight against Malaria. An Indian perspective echoes the same, as Dr. A.C. Dhariwal, Former Director, National Vector Borne Disease Control Programme (NVBDCP), wrote in 2016: “There is historical evidence that achievement against malaria is often fragile and any kind of complacence may lead to resurgence at any time.”

There remains significant financial incentive to tackle Malaria. A 2007 study on the burden of Malaria estimated that for every rupee invested by the National Malaria Control Program, a dividend of Rs 19.7 was earned—on account of reducing the disability adjusted life years lost due to Malaria (an estimated 1.86 million years at the time).

In addition, the global Malaria vaccine market is expected to cross $790 million in value by 2027—up from an estimated $50.6 million in 2024, according to Coherent Market Insights.

As the world struggles to keep COVID-19 in check, despite vaccines that at first touted efficacy rates over well over 90 per cent, it remains to be seen whether Malaria can be tackled through the same route. But the WHO has no intention of keeping its eggs in one basket. As WHO Director-General Dr Tedros Adhanom Ghebreyesus said on Wednesday, “Using this vaccine on top of existing  tools to prevent malaria could save tens of thousands of young lives each year.”