How Covishield, Covaxin, Sputnik V, ZyCoV-D, Moderna's mRNA-1273 differ from one another

As Zydus Cadila awaits approval, how well do you know the COVID vaccines in India 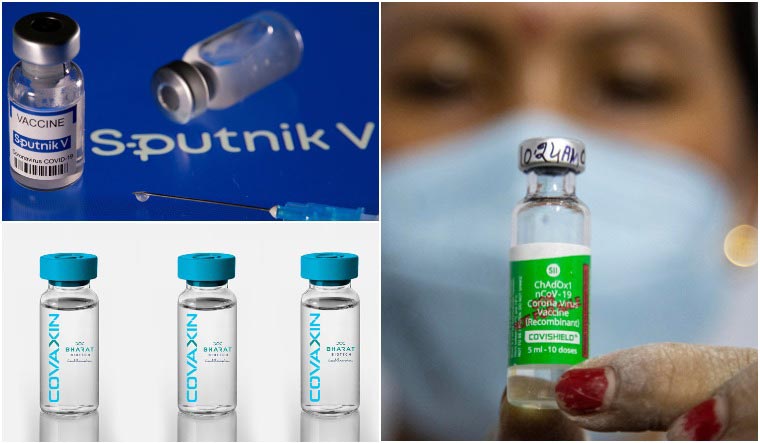 Collage: The Sputnik V, Covishield and Covaxin COVID-19 vaccines that India has approved in the fight against the novel coronavirus

Gujarat-based Zydus Cadila has joined the vaccine race in India as it has sought approval from the Drugs Controller General of India (DCGI) for the launch of its DNA coronavirus vaccine ZyCoV-D. If approved, Zydus' ZyCoV-D will be the fifth COVID vaccine for use in India. It will join the league of Astrazeneca-SII's Covishield, Bharat Biotech's Covaxin, Gamaleya Research's Sputnik V and Moderna's mRNA-1273 vaccine.

But how well do you know your vaccines and the differences among them? Sure, all these vaccines fight the coronavirus infection, but the similarity ends there. Each of these vaccines have different constituents and hence, the way they generate antibodies also differ.

Covishield has been prepared using the viral vector platform. In the vaccine, a chimpanzee adenovirus – ChAdOx1 – has been modified to enable it to carry the COVID-19 spike protein into the cells of humans. This cold virus is basically incapable of infecting the receiver, but can very well teach the immune system to prepare a mechanism against such viruses.

The same technology was used to prepare vaccines for viruses like Ebola.

The effectiveness of the Covishield vaccine is nearly 90 per cent as per the global reports.

India's first indigenous vaccine against COVID-19, Covaxin is, in fact, an inactivated viral vaccine. The vaccine is developed with Whole-Virion Inactivated Vero Cell-derived technology, which means that it contains inactivated viruses that cannot infect a person, but still can teach the immune system to prepare a defence mechanism against the active virus.

Similar technology, used for developing vaccines against seasonal influenza, rabies and polio, among others, has been in use for decades now. Covaxin offers 81 per cent efficacy, according to interim 3rd phase trial results.

Sputnik V, the world’s first registered vaccine, is based on the human adenoviral vector-based platform. Like Covaxin, the gene from adenovirus, which causes the infection, is removed while a gene with the code of a protein from another virus spike is inserted. However, for both the jabs two different vectors are used, unlike Covaxin.

The vaccine uses dissimilar, disarmed strains of the adenovirus that cause the common cold. These are used as vectors to deliver the jab. Injecting two different vectors can minimize the risk of the immune system developing resistance to the initial vector. The virus vector, engineered to be harmless, works as a carrier to deliver a small fragment of the coronavirus to the body. It safely exposes the body to a part of the genetic code of the virus. The body, in turn, recognises the threat, learns to produce antibodies, and fights it off, without causing any illness.

Moderna is a US-based biotechnology company that specialises on a class of medicines based on messenger RNA (mRNA). The same technology has been used to develop its mRNA-1273 vaccine against COVID-19.

A vaccine based on messenger RNA (mRNA) technology does not use inactivated virus, attenuated virus, or any other kind of virus. Instead, it works on the principle that every cell in the body uses mRNA to provide real-time instructions to make the proteins necessary to drive many aspects of biology, including in human health and disease. This means that rather than having the viral protein injected, a person receives genetic material – mRNA – that encodes the viral protein.

When these genetic instructions are injected into the upper arm, the muscle cells translate them to make the viral protein directly in the body. This approach mimics what the SARS-CoV-2 does in nature – but the vaccine mRNA codes only for the critical fragment of the viral protein. This gives the immune system a preview of what the real virus looks like without causing disease. This preview gives the immune system time to design powerful antibodies that can neutralize the real virus if the individual is ever infected.

The nucleoside-modified mRNA in the Moderna COVID‑19 vaccine is formulated in lipid particles, which enable delivery of the nucleoside‑modified mRNA into host cells to allow expression of the SARS‑CoV‑2 Spike antigen. The vaccine elicits an immune response to the spike antigen, which protects against COVID‑19.

Zydus Cadila's ZyCov-D is being developed on a DNA platform using a non-replicating and non-integrating plasmid carrying the novel coronavirus gene, making it very safe. DNA vaccines are composed of bacterial plasmids with a gene encoding for the protein of interest and transcription promoter and terminator. The plasmid gains entry in multiple cells such as myocytes, keratinocytes, and antigen-presenting cells (APCs). It enters the nucleus as an episome without getting integrated into the host cell DNA.

Using the host cell’s transcription and translation machinery, the inserted gene gets translated into antigen. A protein expressed by plasmid-transfected cells is likely to be expressed within the cell and folded in its native configuration. The antigen is recognized by APCs and further induces antibodies and cellular response.

The DNA platform is known to have better vaccine stability and lower cold chain requirements, which would make it easier to store and transport to remote parts of the country.

Unlike its counterparts mentioned above, ZyCOV-D is a three-dose, needle-free vaccine.