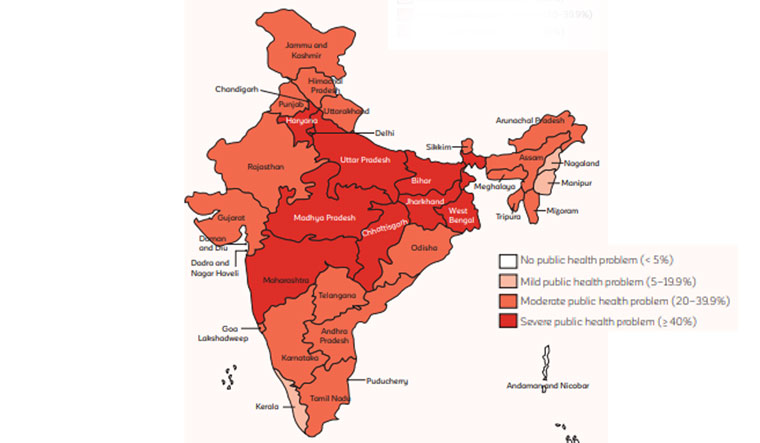 A visualisation of the prevalence of anaemia by state in India, coloured by levels of severity | CNNS 2016-18

One in three Indians have anaemia. At 447 million cases, this number makes up a quarter of cases worldwide.

Now, the Comprehensive National Nutrition Survey (CNNS), released on Monday, promises to add context to the data, as the largest micronutrient survey in the world, with a focus on nutritional indicators among children of age groups 0-4, 5-14, and 15-19 years of age.

The CNNS 2016-18 paints a stark picture of the state of health and nutrition among Indian children, but also provides an unprecedented amount of data allow for a greater understanding of the problems of nutrition among children.

According to the document, available on the National Health Ministry’s website, “The main objective of the CNNS was to collect nationally representative data on the nutritional status of pre-schoolers (0–4 years), school-age children (5–9 years) and adolescents (10–19 years) through interviews, comprehensive set of anthropometric measures and biochemical indicators,”

In addition, the CNNS sought to collect such data on the causes of anaemia in children, as well as on micronutrient deficiencies among pre-school, school-age and adolescent youths. It also identified background characteristics such as the percentage of children’s mothers who had attended school, the percent of children and adolescents who were exposed to mass media and their socioeconomic background.

The CNNS was conducted with the aid of international organisations like the US Centre for Disease Control (CDC) and UNICEF, as well as with Indian institutes like AIIMS, PGIMER, NIN, KSCH and CDSA, amongst others.

Its findings were varied and multi-faceted.

Anaemia is a condition marked by low-haemoglobin levels and is mostly triggered by iron deficiency triggered by poor nutrition. It can lead to increased morbidity and negative effects on physical well-being including weakness, fatigue, and delayed mental and psychomotor development, as well as a higher risk of maternal morbidity.

Anaemia has several consequences for an individual’s productivity. The Global Burden of Diseases (GBD) study found that dietary iron deficiency caused the most disability in India. An IndiaSpend report found that anaemia cost India Rs 1.5 lakh crore in GDP losses in 2016.

According to the CNS, 41 per cent of pre-schoolers, 24 per cent of school-age children and 28 per cent of adolescents were anaemic, with the greater prevalence among children below two years of age.

In the data on anaemia, the prevalence was highest among Scheduled Tribes, followed by that of Scheduled Castes. It was found that anaemia-prevalence reduced as household wealth increased. Madhya Pradesh had the highest prevalence of anaemia (54 per cent) while Nagaland had the lowest (at eight per cent), followed by Kerala at nine per cent.

Diet and malnutrition in India

Diet plays an important part in fending off the onset of anaemia.

Stunting, which in almost all cases takes place within the first 1,000 days after birth, was found in 34.7 per cent of children under the age of five—with 38.7 million cases. The most populous states, Bihar, Madhya Pradesh, Rajasthan and Uttar Pradesh, had the highest rates of stunting (between 37 to 42 per cent), while the lowest prevalence was found in Goa and Jammu and Kashmir.

Citing other studies, the CNNS stated that 46 million children under the age of five suffered from stunting, 72 million adults had diabetes and that 166 million adults were overweight or obese.

The survey attributes the rise in non-communicable diseases, obesity and diabetes to a shift in diet and lifestyle patterns, as food and drinks high in far, sugar and sugar grow cheaper and more widely-consumed. Diabetes, according to the latest studies, is no longer associated with affluence and has grown prevalent across socio-economic categories.

Under POSHAN Abhiyaan, the government targets reducing stunting, underweight and low birth weight by two per cent a year and anaemia prevalence by three per cent a year. Overall, India plans to reduce anaemia levels to one-third of what was recorded in the fourth National Family Health Survey, by 2022.

Similarly, under the Sustainable Development Goals, India needs to reduce the prevalence of anaemia in women of reproductive age by 50 per cent by 2030.

To see a visualisation of the CNNS findings, visit the dashboard on nutritionindia.info.