The decision has brought cheer to movie lovers 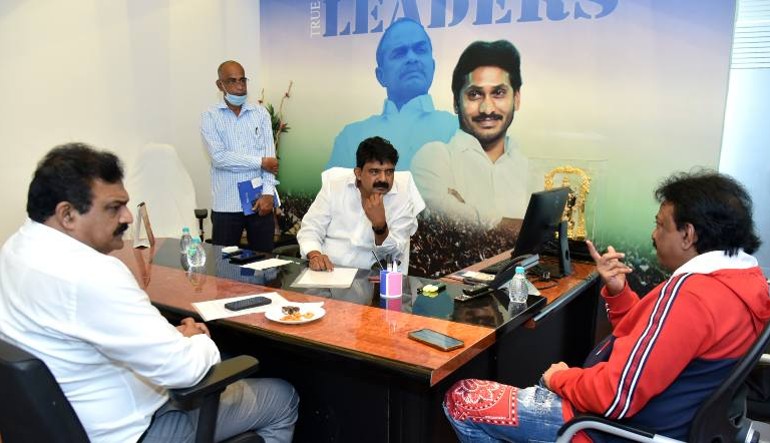 Among the countless fans of ‘megastar’ Chiranjeevi is 38-year-old M. Sridhar. The lab assistant from Nandyal town in Andhra Pradesh takes pride in watching the movies of Chiranjeevi and other actors in his family on the very first day. The ritual involves him paying for his own ticket and tagging along with his friends who share the same passion. However, the next few days turn challenging for him as he is obliged to take his family members as well for the movie. “I have to shell out a minimum of Rs 1,000 to take three others from my family. For a middle class family, watching the movie immediately after release date, when ticket rates are increased, is burdensome.”

Recently, when Chiranjeevi’s nephew and popular actor Allu Arjun’s pan-India movie, Pushpa: The Rise hit the screens, Sridhar was a relieved man. With each ticket costing just Rs 50, Sridhar’s family watched the movie for just around Rs 200 on the third day of the release. “I am very happy. I can now comfortably take my family to the theatres.”

Recent attempts by the Andhra Pradesh government to regulate operations and cap ticket rates in the state has brought cheer to movie lovers like Sridhar. The main source of entertainment in the region, which was turning out to be a costly affair for the poor and the middle class, has been brought within their reach.

In April last year, the AP government issued an order. Geographically, cinema theatres were classified under the Municipal Corporation area, Municipality area, Nagar Panchayat area and Gram panchayat area. The ticket rates were fixed depending on whether the theater fell under the category of a ‘Multiplex’, ‘AC’ or ‘non-AC’. The ticket class was further categorised under ‘Economy’, ‘Deluxe’ and ‘Premium’. In the Municipal Corporation area, The highest to lowest ticket range is Rs 250 to Rs 20, in municipality  Rs 150-15, in Nagar Panchayat Rs 120-Rs 10 and in Gram Panchayat Rs 80-5. What the order immediately did was to put a stop to the culture of jacking up ticket rates of big ticket releases for the first two weeks, which had almost become a norm in the Telugu states.

While Sridhar might agree with the Y.S. Jagan Mohan Reddy government’s move, his favorite actor does not. Pawan Kalyan, one of the biggest stars of Telugu film industry, whose last film Vakeel Saab released in April, lashed out at the ruling YSR Congress Party. The founder of Jana Sena Party accused the government of targeting him and his film in order to disturb his financial position. His movie became the first one to be released after the government order (GO) and as a result had to follow a linear pricing system right from the first day. A section of movie bigwigs have objected to the idea of having the same ticket prices for all movies.

Ram Gopal Varma had tweeted referring to director S.S. Rajamouli’s much-hyped multilingual project, “How can a Rs 500 cr RRR film and a film costing just Rs 1 cr be forced to sell at the same ticket price?”

The director had even met AP Cinematography Minister Perni Nani on Monday and gave his inputs.

One of the well-known Telugu film producers, Bandla Ganesh, like many others from his fraternity, has similar views as Varma.

“When I was young I used to wear a shirt worth Rs 100. Right now, I have a branded shirt which costs Rs 30,000. Both are shirts but I still paid more for the other shirt. Similarly, if a particular movie has that pull, then allow higher pricing for it. If the audience is not convinced, then they will not spend on the movie. We are not forcing anyone. It is a matter of demand and supply.”

So, what was the system followed till now? Whenever a big movie was up for release, the exhibitors or the theater management used to take permission from the joint collector to increase ticket price for a stipulated time, most often two weeks, to capitalise on the hype. The ticket prices would go as high as Rs 500 or even more.

What exists now is the shadow of the government order as 200 odd exhibitors approached the high court and got it scrapped late last year. The determined government went for an appeal while the court suggested the government to form a committee involving all stakeholders to reach an amicable solution.

Producer Ambica Krishna, who has been part of the Telugu film industry for decades and also runs Ambica theatre in Vijayawada, says a section of exhibitors object to low slabs of tickets, Rs 5 and Rs 10 in Gram and Nagar Panchayats. “Thirty er cent of the theatres are in these centers and it will be difficult to maintain theatres with that pricing. We are hoping that the government increases the ticket rates in these centers.”

It also looks like there is a crack in the industry as some of the influential figures like actors Chiranjeevi and Nagarjuna have decided to take a cautious stand and engage rather than be outright provocative.

In reality, the existing ticket rates in most of the theatres, especially the urban, match with those fixed through the government order. The practice is that the tickets are sold at a different price than the ones legally shown in tax books, which helps the exhibitors pay less taxes. The latest GO, if re-implemented, will bring the theatres under increased tax slab due to the regulation.

Producer Natti Kumar, who is seen as a rebel voice within the industry, supports the order to a great extent and pointed out that it helped crackdown on unregulated practices.

“Earlier there were benefit shows to contribute to natural disasters and social causes. Now, there are five-six shows in a single day after the movie releases, which is done only to make money commercially.” The AP government has also stopped giving permission for such special shows or increased screenings.

Telugu film industry is pegged at Rs 2,000 crore annually where around 150 movies are released. Close to 1,000 theatres, including multiplex and single screen theatres, are spread across the state. It is learnt that there are 13 actors who come under the ‘star’ category and on whom big budgets are planned.

Commenting on the ongoing issue, film critic and trade analyst Jalapthy Gundelli said, “More than 30 to 40 per cent of the revenues are recovered in the first two weeks with increased prices and more shows.” The producers, distributors and exhibitors are connected through different and often varied models which include outright sale or profit sharing or others.

What has happened in the last one month is that dozens of theatres have been shut down in AP. A section of theater management say they have voluntarily closed, protesting against the government’s action. However, the state government representatives said many of the theatres were seized for lack of NOC from the fire department and due to lack of proper permission. This led to many theatres shutting down fearing action.

On this issue, the film industry and the political parties are divided, but not the public. Dr. Jupalle Rakesh Reddy, a member of the 13-member committee constituted by the state government, is representing the audience as a ‘film goer’. The committee which comprises government officials, film industry representatives and a censor board member has met twice till now.

“I have interacted with a cross section of people and I can say that people welcome the decision of capping prices. Why can't the producers go back to the old model of getting profits by letting the movie run for 50 to 100 days. Now, they want to take their profits in just 2 weeks.”

Perni Nani, cinematography minister of AP, in the past said as a licensing authority, the state government can frame rules for tickets. “Our government did not do anything new. We expect everyone to follow the law,” he said in one of the media interactions.

The AP government is also bracing up for selling tickets online through AP Film Development Corporation. Hearing a petition filed against this step of the government, the AP High Court, on Wednesday, questioned what was wrong if government sold tickets online and felt that it helps in preventing tax evasion.