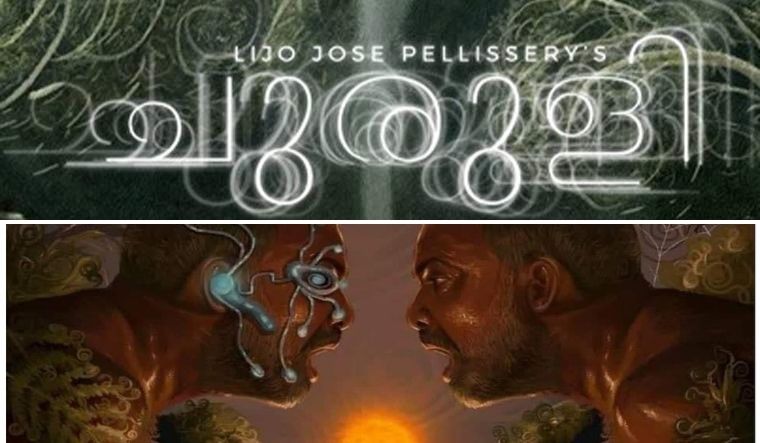 Cinema comes with a sort of certainty. You go in with the expectation of being transported to a place and time you are either familiar with or unfamiliar and you meet characters that are good, bad, ugly, weird or even relatable. You have the setup, build, and payoff. You may exit the space laughing, angry, unsettled, thoughtful or plain bored.

Even when the three-act structure is not adhered to, and the end is open to interpretation, you come out with some certainties.

And then there is absurd cinema where genres are bent, answers are not forthcoming and payoff is not guaranteed. Director Lijo Jose Pellissery's latest, Churuli, is one such piece of absurd art--one that has not gone down well with many critics despite its artistic elegance.

It all begins with a clever MacGuffin--the foreboding narration of the tale of a Namboothiri who goes in search of Perumadan (an evil spirit) who misleads people. Unbeknownst to the Namboothiri, Perumadan tags along disguised as an anteater, misguiding him in every step. The Namboothiri still goes around in circles, to this day, goes the folklore.

The tale may be a harbinger of things to come. But we are not sure, because it all looks fairly commonplace in the beginning. We have two undercover cops, going by the names Shajeevan and Antony, chasing an evasive criminal, Mayiladuparambil Joy, possibly hiding in a terrain that is enticing and hostile in equal measures. The premise has all the makings of an investigation thriller. But what follows is hardly a hunt for an elusive criminal, but a descent into madness, absurdity, folk horror, and hyper masculinity. It is set in a bizarre place of mostly men who are extremely unpredictable, conversing in an expletive-laden lingo that is bound to shock most movie-goers.

The folklore in the beginning is not the only bit of foreshadowing that the director places. There is a passing mention of alien abduction, and images of a maze all too frequently appearing at various places.

As time goes on, the nature of the two cops change. They realise that this alien land is somehow sufficiently familiar to them, and they have in them what takes to be one among the people here. In the end, after several encounters with what possibly are alien creatures, shape shifting trees, apparitions, a first holy communion fiesta, an axe-wielding old woman and a healer, they nab their culprit, only to have a Repo Man-isqe transportation to an unknown future. The loop might be repeated again. Pellissery leaves it up to you to wonder.

Are there answers to all the questions? Nay, that is not how absurd fiction works. The title, which can be loosely translated to labyrinth, and a spiral image on the title card had given enough indications that not all answers would be forthcoming. The director and writer S. Hareesh do not even leave you with a conventional open ending. It is all a bit confusing, evasive; a circuitous ride if you may, in a Donnie Darko way.

If you are someone who wants to wrap your head around every little detail and be on top of every twist, by the end of the movie, Churuli might disappoint you. The director himself had said he likes to keep things "undefined" so that the viewers can search for answers and get some.

Maybe it is all a long dream. Maybe it is the best piece of ‘bizarre art’ to come from the Malayalam movie industry.

The possibility of a world beyond this echoes in Churuli, making it a spiritual cousin to the director’s Ee.Ma.Yau and Jallikattu which dwelt on themes of death, Christian mythology, and of course hyper masculinity. Pellissery had said these three films work better as a trilogy and now one can see why.

The unmarked village in Churuli could be an allegory to the concept of a purgatory, an idea the Catholic church used to amass wealth in the Middle Ages and continues to be part of its theology. You see visions of the evil and incomprehensible—a boy with his foot in fire—but this is not hell yet. The people here maybe lost souls who show a semblance of normalcy at daybreak. This might possibly be the redeeming quality that might have prevented them from being condemned to the place reserved for the vilest, according to Christian mythology. There is also a priest who comes to give them "communion" to save them from eternal damnation. Curiously, the place chosen to be the temporary church is an arrack shop.

The men discuss murder and disposal of the body, and they have all done it before. Not one of them belong to this place, they have all taken shelter here. The need to hunt and conquer (women) to prove one’s masculinity is a constant refrain. Nobody here is just a normal man (there are hardly any women) who has decided to cut off ties with the rest of the world.

This is also a place where time stands still. Shajeevan finds it hard to remember when they arrived here. The others in this place, too, seem to be clueless about the time they have spent here. They have all arrived here after a brush with crime. “Nobody ends up in this place without having committed some crime,” notes one character.

While Antony and Shajeevan lose the sense of time, it is not just time that is fluid in this world where aliens frequent and evil spirits lurk. Gender roles are fluid too. While the few women in the director's Angamaly Diaries and Jallikattu are more sensible, you do not see such women in this village of absurdities. They are equally vile, violent and abusive in Churuli that reflects a time-space-gender fluidity that is not of this world.

This is a land where no rules apply, where many might wish to be. All you need to do to get there is cross a rickety bridge. Perhaps the bridge symbolises the moral code that is put in place to rein on the vicious and the violent, and once that bridge is crossed, it is the land of all that is evil, where men can live to fulfill their darkest and deepest desires as one of the characters proposes. You eat, drink, fornicate (even prey on the young and nubile as one of the men get accused of) and murder, if that is what gets you going. The bridge may be hard to cross; it might take some unloading, but once it is crossed, and all that holds you back is left out, what remains is the feral and predatory.

Pellissery is a wizard at portraying the baseness of human nature. He excels at painting his men selfish, disturbed, a bit weird, wild and obstreperous. They act upon impulses, with scant regard for consequences—the rabble rousing men in Angamaly Diaries do not think twice about starting a fight over a plate of rabbit meat, Eeshi of Ee.Ma.Yau. slaps a nosy priest even as he plans a grand funeral for his deceased father. In Churuli, too, you see such men who eat, drink, abuse, and then drink some more. While the men of his earlier films had to adhere to some sort of social construct, those in Churuli are not bound by such rules.

Churuli could be Pellissery's tribute to existentialist writers as the loop that these villagers are in resonates with The Myth of Sisyphus. A bit of the disorientation, chaos and obscure lucidity that you find in Kafka, the bleakness of Sartre's world and the absurdity of Camus, the Pellissery flick has all these and more. The village in the movie would very well fit into the nightmares of Antoine Roquentin or Gregor Samsa.

Perhaps it is all a nightmare, and that is being too simplistic. Perhaps, there never was any Joy.