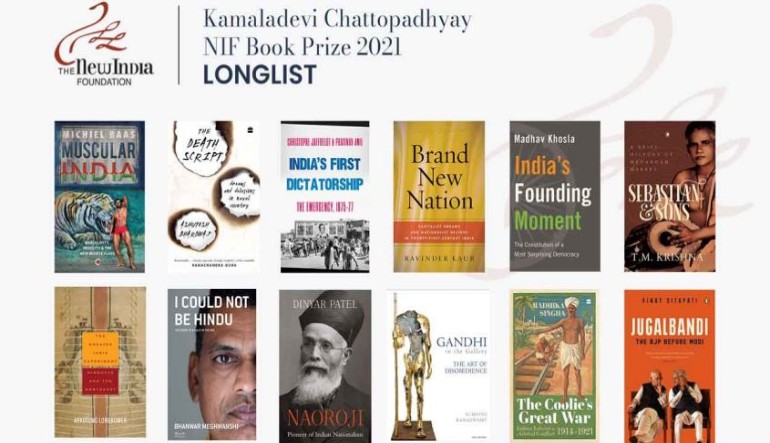 A deep dive into how the Bollywood ideal of a lean and muscular physique inspired lower middle class men to become gym trainers; a forensic study of Indira Gandhi’s Emergency and son Sanjay’s role in it; a celebrated musician's account of how Mridangam, the main percussion instrument in Carnatic music, is made; the rise of Hindu nationalist politics in north-east India; a history of the 550,000 camp-followers who did manual labour in the first world war; a beautifully illustrated volume that explores how Mahatma Gandhi came to be the muse of several Indian artists—the longlist for the fourth edition of the prestigious Kamaladevi Chattopadhyay NIF Book Prize for non-fiction has many distinguished titles.

Kamaladevi Chattopadhyay NIF Book Prize is one of the few literary awards still operational during the pandemic. It celebrates compelling non-fiction literature published in the previous calendar year by emerging writers of all nationalities. Instituted in 2018, the prize carries a cash award of Rs 15 lakh and a citation.

Started in 2018, the NIF book prize was named after Kamaladevi Chattopadhyay, a patriot and an institution-builder. The award further builds on the New India Foundation's mission of sponsoring high-quality research and writing on India post-independence.

The Jury this year, which include entrepreneur Nandan Nilekani, historians Nayanjot Lahiri and Srinath Raghavan, has longlisted 12 books for the Prize. These books cover decades of modern Indian history, nourish creative and conscious conversations around the Indian polity, and display a diversity of approaches and themes.

"The 12 long listed books are very different from each other, but each one represents an outstanding contribution to its field. Some explore topics that are important but under-studied, or illuminate a neglected area of a well-known field. Others offer new research on a topic that has been studied before, or bring a new perspective to bear on issues that are familiar. Yet others speak to issues that are of contemporary importance or enhance our understanding of our nation's past," says Niraja Gopal Jayal, jury member and trustee of the New India Foundation.

Last year, the prize was jointly awarded to Amit Ahuja for his debut Mobilizing the Marginalized: Ethnic Parties without Ethnic Movements (Oxford University Press) and Jairam Ramesh for his biography A Chequered Brilliance: The Many Lives of V.K. Krishna Menon (Penguin Random House). In 2019 it was awarded to Ornit Shani for her scholarly work  How India Became Democratic: Citizenship and the Making of the Universal Franchise  (Penguin Random House) and in 2018 to Milan Vaishnav  for his remarkable debut When Crime Pays: Money and Muscle in Indian Politics (HarperCollins Publishers).

The shortlist of six titles of the Kamaladevi Chattopadhyay NIF Book Prize 2021 will be announced in the last week of October.

The 2021 Longlist has the following titles: