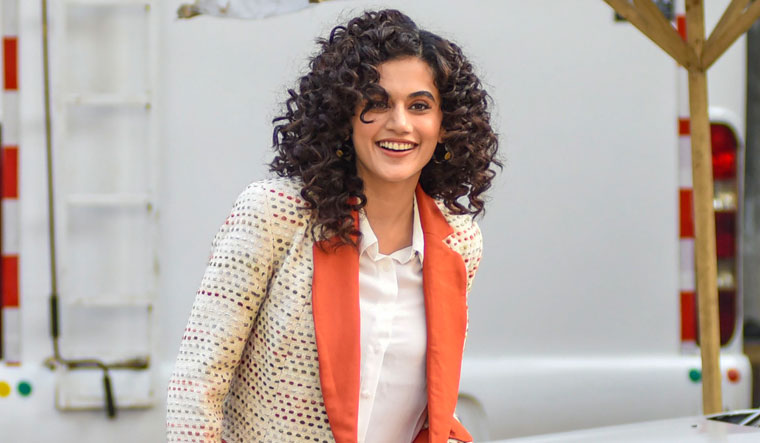 Actor Taapsee Pannu on Thursday announced that she is turning producer and said she will continue to back quality content under her banner titled Outsiders Films.

Known for her critically-praised performances in Hindi films such as Pink, Mulk, Manmarziyaan, and Thappad, the 33-year-old actor said the decision to foray into film production was organic.

After being in the entertainment industry for more than a decade, Pannu has teamed up with Pranjal Khandhdiya, a content creator and producer on films like Super 30, Soorma, Piku, and her upcoming film Rashmi Rocket to start Outsiders Films. I have been very sure that direction is not my cup of tea. Production was something I thought I could pull off. Being an actor, I love to act, I couldn't divert my attention and focus to something else when I am on a set.

"So the day when I have a partner who could handle the ground work, while I concentrate on my acting job, is when I would partner with and then start a production. That's when Pranjal came in, Pannu said.

The actor said she is excited about expanding her horizons as a producer. I didn't think twice when he asked me if I would like to partner with him, I said, I would love to. And there onwards I have really never been stressed about practicality of things and happily jumped into this new tag of being a producer.

Pannu, who made her acting debut with noted director K Raghavendra Rao's 2010 Telugu romantic musical Jhummandi Naadam, said she will continue to act and support films she strongly believes in. One thing Pranjal and I have maintained is that I will only produce the kind of films I will be a part of. This doesn't mean I have to be part of every film I produce. It means the kind of films I will produce are the ones that people know me for as an actor. That continuity and consistency will be there because I can't green light a film unless and until I believe I am an audience to it, she said.

The Delhi-born actor said Outsiders Films is an apt name for her production house. Pranjal and I both come from humble backgrounds, that's when the name Outsiders Films clicked with us. We aim to produce meaningful, entertaining, and quality content, she added.

Pannu has a string of films up coming up, including Hindi titles Looop Lapeta, Rashmi Rocket, Dobaaraa, Shabaash Mithu, and a Telugu movie Mishan Impossible.

She was most recently seen in Haseen Dillruba.