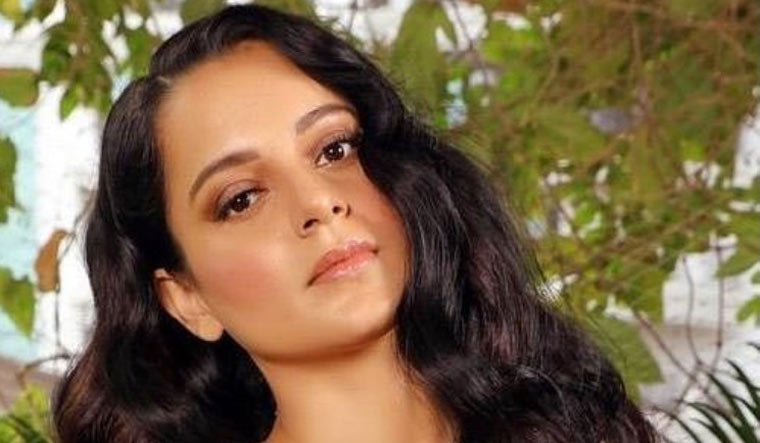 As the farmers’ protests rage on in the national capital over the new agricultural laws, Bollywood actor Kangana Ranaut took to Twitter and shared a picture claiming that the ‘Shaheen Bagh Dadi’ was also present at the protests and is available for hire.

Bilkis Bano, the 82-year-old woman who became the face of the anti-CAA-NRC protests at Shaheen Bagh, inspired many women to come forward and participate in the sit-in demonstration that went on for over three months. She was also featured on BBC’s ‘100 Women of 2020’.

Following the farmers’ protest in Delhi which entered its fourth day on Sunday, Kangana shared fake information on Bano, saying that the octogenarian was available to attend protests for “100 rupees”. 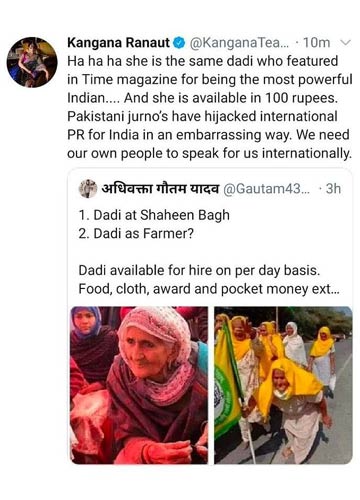 “Ha ha ha she is the same dadi who featured in Time magazine for being the most powerful Indian.... And she is available in 100 rupees. Pakistani jurno’s have hijacked international PR for India in an embarrassing way. We need our own people to speak for us internationally,” she said, quote tweeting another user.

However, the National Award-winning actor was slammed for sharing the fake news on social media, following which she deleted the tweet.

Co-founder of fact-checking portal Alt News, Pratik Sinha, said that the actor is using her position to “pull down and discredit those who are not privileged”.

This is a false claim by @KanganaTeam. She has now deleted her tweet. Do not forget how she's using her position to pull down and discredit those who are not privileged, and fighting for their rights. She is EXACTLY what she claims to be fighting against. pic.twitter.com/h1huGvf9Ki

After deleting the tweet, Kangana responded with a weak argument to those who called her out on sharing the fake news.

“Getting too excited huh..... calm down so much excitement not good for weak hearted Jai Chand like you. It’s not a false news my sources still verifying. And who is your source dummy? Sherlock Holmes himself?” she said.

Thousands of farmers from Punjab and Haryana continue to protest the Centre’s new agriculture laws as part of the ‘Dilli Chalo’ campaign, braving the cold, tear gas and water cannons as temperatures dipped in the national capital. The protesting farmers have decided to stay put at the Singhu and Tikri border points, blocking roads and entry points in Delhi.

The Centre has invited the protesting farmer organisations to hold discussions in Delhi on December 3.