Sushant's father meets Nitish, thanks him for efforts to ensure justice to his son

Singh told Kumar that had he not intervened, Maharashtra govt would have shut case 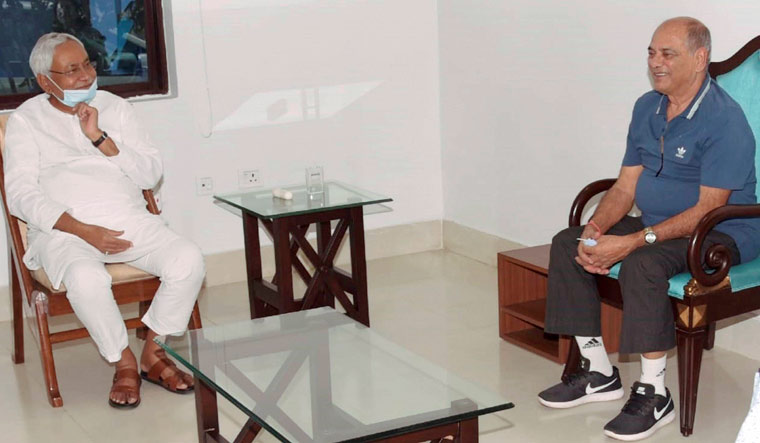 Sushant Singh Rajput's father and sister met Bihar Chief Minister Nitish Kumar on Wednesday to thank him for his intervention in ensuring justice to the deceased actor, sources close to the family said.

Rajput's 74-year-old father K.K. Singh told Kumar that had he not intervened, the Maharashtra government would have shut the case.

The Patna-born actor was found hanging in his apartment in Mumbai's Bandra on June 14. His father lodged a police complaint in Patna on July 25 levelling various allegations against actress Rhea Chakraborty in connection with his death. The Bihar government recommended a CBI probe into the death case on August 4.

Kumar told Singh and his daughter that the state government had thought there was something wrong when Maharashtra police did not cooperate with the Patna police officials who had gone to Mumbai to investigate the case following Singh's complaint.

A young IPS officer of Bihar was also forcibly quarantined hours after he landed in Mumbai on August 3.

This was the reason when Singh sought a CBI probe into his son's death, he decided to hand over the matter to the premier investigative agency, Kumar said.

The CBI started investigating the case on August 21.

According to the sources, Singh talked about the "slow progress" in the CBI's inquiry and Kumar said that ultimately the agency has to conduct the probe.

The chief minister had recommended the CBI probe after Singh had met the then state police chief Gupteshwar Pandey and made a request in this regard.

Rajput's family members told Kumar that they could not meet him at that time and hence paid a visit to him at his official residence on Wednesday to thank him.

Singh also told Kumar that during the actor's visit to Patna last year, he had expressed desire to meet the chief minister as he wanted to do something for his home state.

The CM regretted not meeting the actor and described him as a "young icon".

NDA leaders have said that the death of Rajput death was not an issue in the Bihar assembly elections but, considering the sentiment of state's people, they want that the talented actor gets justice.

Kumar's recommendation for a CBI probe was frowned upon by the Shiv Sena-headed coalition government of Maharashtra which dubbed the move as one taken with a "political motive".

The Shiv Sena had alleged that Kumar was trying to cash in on the immense sympathy generated for Rajput during the assembly elections, a charge rebutted by the ruling NDA in Bihar.