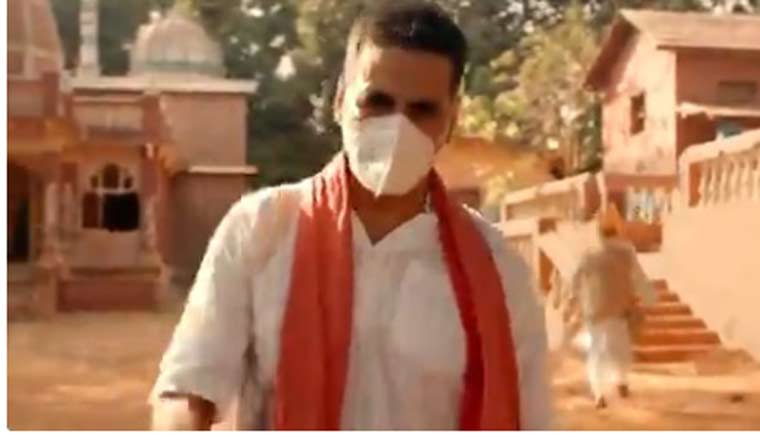 Earlier this week, visuals of Akshay Kumar, wearing mask, gloves and shooting for an advertisemnt had surfaced on social media. The commercial, directed by R. Balki who hemmed Akshay's Padman and Mission Mangal, was released on the official Twitter handle of the Press Information Bureau (PIB).

In the video meant to promote the message of positivity amid the pandemic, Akshay Kumar stresses on the need to wear masks and maintain social distancing, while at the same time start stepping out for work as lockdown is being relaxed.

The clip shows a masked Akshay stepping out for work, but he is stopped by his neighbour who asks him why he is venturing out while the virus is still active. Akshay replies that we need to move on with our lives, but with precautions like masks and frequent handwashing. In the govt-sponsored ad, Akshay said that even if one contracts the disease, the government has equipped the medical community to handle it. He added that even if we catch the disease, we will emerge out of it.

Our battle with #COVID19 is not over, but we will not be afraid of the virus. We will take all precautions and we are going to move on with our lives

Akshay concludes with a call to move on and make the nation 'aatmanirbhar'.

Sharing the video, PIB tweeted: “Our battle with #COVID19 is not over, but we will not be afraid of the virus. We will take all precautions and we are going to move on with our lives.”

Speaking about the advertisement, Balki had said it was for the Health Ministry and that the team took all the necessary precautions while shooting, including wearing masks and working with minimal crew. "This is an ad for the health ministry featuring Akshay Kumar about the post lockdown responsibilities of each one of us. We need to get back to work but ensure our safety and those of others. So at our shoot we did the same.

"Like getting back to work with social distancing, sanitised outdoor set, disinfectant screen, masks. We got used to it in a few minutes. There was minimal crew and very strict protocols," Balki said.