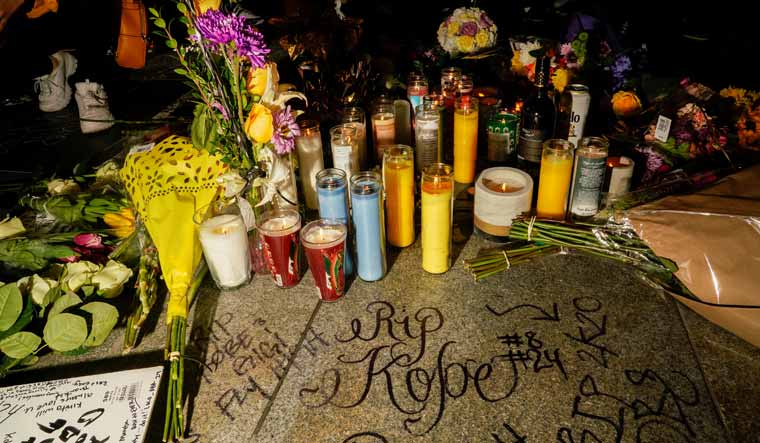 Mourners gather in Microsoft Square near the Staples Center to pay respects to Kobe Bryant after a helicopter crash killed the retired basketball star, in Los Angeles, California | Reuters

As the world struggles to recover from the news of tragic death of basketball legend Kobe Bryant in a helicopter crash in California, musician Yanni shared a tribute to the NBA star on social media.

An adaptation of the 'California Dreaming', the music video is slowly picking up pace on Twitter, with many thanking Yanni for the thoughtful gesture. “ Dedicated to our friend and inspiration Kobe Bryant! “From the first to the last”!…We will all miss you”... You will live forever in our hearts!!... My close friend’s, Jose Feliciano‘s version... (sic),” Yanni tweeted.

“California Dreaming”
Dedicated to our friend and inspiration Kobe Bryant! “From the first to the last”!…We will all miss you”... You will live forever in our hearts!!...Yanni ❤️❤️❤️
My close friend’s, Jose Feliciano‘s version... pic.twitter.com/fXBSYSWarf

The video opens with a shot of Bryant, donning his iconic jersey No 24. The heartwarming video also shows glimpses from the player's professional and personal life, also featuring his 13-year-old daughter Gianna who died in the crash.

Thank you dear @Yanni for a beautiful tribute😔We're all heartbroken & mourning here in Southern CA. @kobebryant has been a big part of our lives..Praying for the other families lost in this tragedy as well🙏🙏🙏❤️💔❤️❤️

Nicknamed the 'Black Mamba', Bryant scored a record, career-topping 81 points against Toronto. He won two Olympic gold medals with the US basketball team in 2008 and 2012. He retired after the 2015-2016 season, citing niggling injuries. Bryant is married to Vanessa, and has four daughters—Gianna, Natalia, Bianca and Capri.

The Grammys award night was also overshadowed by the news of the five-time NBA champion's sudden demise. Singer-songwriter Lizzo kick started the ceremony with a shoutout to Bryant before her opening act. "Tonight is for Kobe!" she said.

It was followed by Grammy host Alicia Keys' special message honouring the basketball legend. "Here we are together on music's biggest night celebrating the artists that do it best. But to be honest with you, we're all feeling crazy sadness right now because earlier today Los Angeles, America and the whole wide world lost a hero. And we are literally standing here heartbroken in the house that Kobe Bryant built," she said.