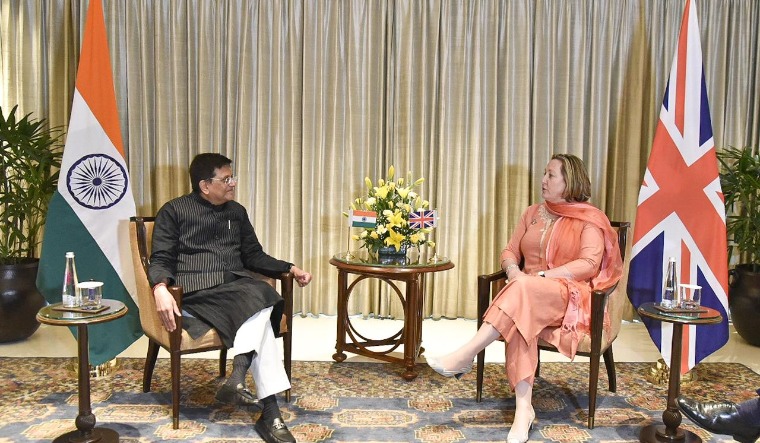 India’s free trade agreement (FTA) strategy kicked into high gear on Thursday with the launch of formal talks with the UK, but a more defining factor dictating New Delhi’s blueprint for a post-COVID global economy is very much an FTA it is not part of—the RCEP.

RCEP (Regional Comprehensive Economic Partnership) trade agreement came into effect for most of its 15 member countries last week. India, in a landmark decision back in 2019, had decided to opt out of the China-led trade block (which includes the ASEAN countries, besides the likes of Australia, Japan and South Korea). RCEP is now the largest of its kind in the world, covering about one-third of the world’s population and GDP. Despite India being part of negotiations to form RCEP since 2011, the Narendra Modi government finally pulled out ahead of signing the treaty, fearing it will lead to a deluge of cheap goods from the likes of China, besides India losing its competitive advantage in exports.

India’s fall-back theory was concise and straightforward enough—instead work on more comprehensive trade deals with other economic powerhouses, like the US and European Union (EU), besides, as seen today with the launch of formal talks, with a post-Brexit UK.

After Thursday’s formal launch of talks by Union Commerce and Industry Minister Piyush Goyal and UK’s Secretary of State for International Trade Anne-Marie Trevelyan, negotiators will brainstorm over the next few weeks hoping for an interim deal, followed by a formal deal by early 2023 if all goes well.

For both countries, geopolitical considerations make entering a free trade deal a significant necessity. Britain has exited the EU and is looking to spread out its business engagements globally, if it is to match up to the combined power of the EU with its powerhouse economies (and ‘frenemies’) like Germany and France. It has already formalised some 40 FTAs with countries around the globe since Brexit, and one with India, its 15th biggest trade partner, offers immense potential. Heavy machinery, green energy technology as well as digital services are something the UK hopes will help double its trade with its former colony, while India hopes to ramp up exports of basmati rice, wool, yarn and pre-mixed tea.

India’s compulsions are at once both strategic as well as political. On one hand, it wants to pivot its service-oriented economy into a manufacturing powerhouse, a task multiple governments and multiple campaigns like ‘Make in India’ have not managed to achieve so far. With post-COVID realisations and tensions with China giving a wake-up call, there is an added urgency to make this shift. And improving and spreading out one’s trade relations with many economies instead of getting too dependent on China as was the case pre-COVID—a sort of ‘not putting one’s eggs all in the same basket’—is the thinking that has gained currency over the last two years.

Politically, too, Modi and his point man Goyal seem to be veering around to the realisation that pushing trade and export bottom-lines may be a better mode to aim for the government's oft-repeated target of a $5 trillion economy, or at least close to that figure, in time for the next general elections in 2024. With domestic consumption suffering from the aftermath of COVID and rising inflation adding to the frown lines here, a glimmer of hope has been the export performance—in just the first 11 months of last year, exports exceeded $354 billion and imports hit $513 billion, highs never seen even during ‘normal’ times. This has excited Goyal enough to push to finally achieve the government’s oft-set (but never realised till now) export target of $400 billion in a fiscal year.

It has also set the Indian government on track to push for more free trade deals to jack up its export achievements. While negotiations over an India-EU FTA had broken down several years ago, there are murmurs that post its RCEP snub, India will have a relook and soften its stance.

Interestingly, a breakthrough was achieved with the US earlier this week when it allowed import of Indian mangoes (and India allowed US-made pork). This has revived hopes that the FTA—which was discussed for long and hit a roadblock over the withdrawal of GSP (generalised system of preferences that India enjoyed) during the Trump presidency—could still be saved. US Trade representative Katherine Tai even visited India this November.

However, the first off the block is likely to be an FTA with a close ally, the United Arab Emirates (UAE)—Modi is expected to sign the deal when he visits the Dubai Expo later this month. The UAE is behind only the US and China in the list of India’s biggest trading partners. An FTA with Israel is also at the last stage of negotiations, according to some reports.