Kerala SilverLine project: Long overdue or a recipe for disaster? 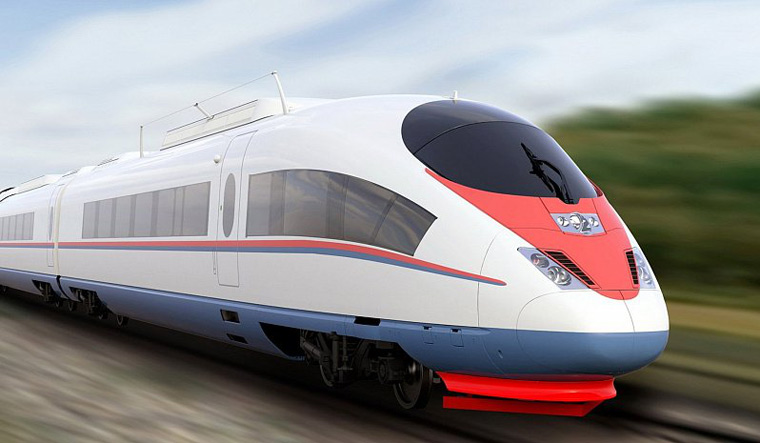 The 529.45-km SilverLine corridor will connect Kasaragod and Thiruvananthapuram at a maximum speed of 200kmph | Representational image

Like in the case of most dream projects, there is palpable excitement from the Pinarayi Vijayan-led LDF government to commence work on the much-hyped semi-high speed rail corridor, known as the Kerala SilverLine Project. The chief minister, basking in the glory of the historic re-election of his government in May, called on Prime Minister Narendra Modi last week to speed up the clearance to start the proposed rail project that would connect north and south Kerala in a 529.45 km-long straight track that runs parallel to the western coast and is distinct from the Indian Railways. It will cover 11 districts through 11 stations and promises to reduce the travel time between Kasargod in the north and the state capital of Thiruvananthapuram in the south to less than four hours as against the current 10 to 12 hours.

The project was first mooted by then finance minister Thomas Isaac when he presented the Kerala budget in March 2010, with an emphasis on the need to strengthen rail and water transport to tackle the rising transportation needs of the state. More than a decade after Issac tabled the proposal, work on the super-fast rail corridor is expected to commence as soon as the Centre waves the green flag.

However, back home, a controversy is slowly gathering storm on the environmental impact and economical feasibility of the project. The Kerala Sasthra Sahitya Parishad has urged the Kerala government to stop all activities of the SilverLine project till a Detailed Project Report (DPR) and an Environmental Impact Assessment (EIA) are published and put out for public consultations.

A key question that environmentalists and researchers ask in unison is if Kerala really needs a semi-high speed railway network worth Rs 65,000 crore to ease its mobility woes.

According to environmentalist Sridhar Radhakrishnan, Kerala seems to have overlooked certain criteria to hasten the project. “One, in a post-COVID world where remote working has become a norm, the need for transportation has drastically come down. Two, the challenges and threats posed by climate change. And finally, the gravest of all problems—the ecological and hydrological risks posed by the construction," he elaborates.

Two full-term governments after Isaac's proposal, effects of climate change have become more pronounced. The environmental and hydrological toll of the project on Kerala’s peculiar, delicate topography cannot be played down, especially for a state that is yet to come out of the unprecedented devastation caused by the 2018 floods, the worst in over a century.

While the Rapid Environmental Impact Assessment (REIA) report of the SilverLine published a year ago states that the project does not pass through any notified area, it notes that “the alignment is somewhat parallel to the Western Ghats—a global biodiversity hotspot—and hence, impacts relating to biodiversity need to be carefully assessed.” To be specific, the project will pass through delicate landforms such as wetlands, forest areas, rice fields, and backwater regions. Not to mention the displacement of several households and establishments, including shops, schools, temples, and mosques, the rehabilitation of which is sure going to be another hurdle.

According to an RTI reply from K-Rail, 9,314 buildings will have to be razed to the ground for the project, while 10,000 families will need to be relocated. However, according to Metroman E. Sreedharan, the number could go as high as 20,000. 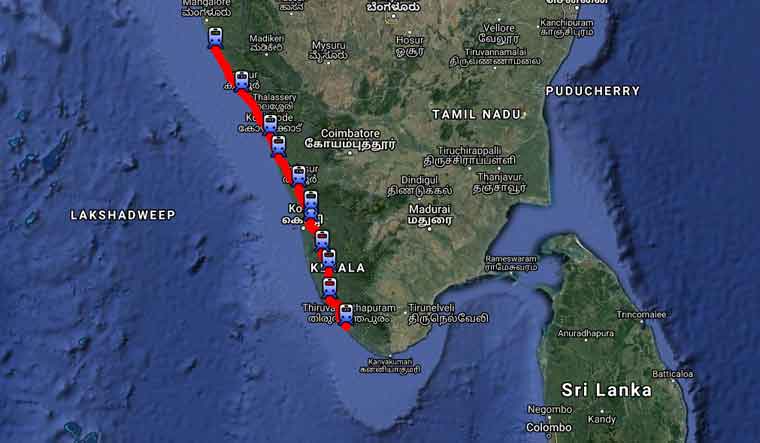 The alignment of the Kerala SilverLine project as approved by Kerala government | via www.keralarail.com

Kerala is a land defined by its water bodies, and hence, the integrity of the landscape is crucial. A lesson learned from the 2018 deluge was to give 'Room for River' wherein the idea is to not obstruct rivers and give water enough space to flow so that it does not invade residential areas. According to the REIA, of the total 530 kms of the project, 80 per cent would include embankments (a fully fenced large bund) and cutting—structures that will obstruct water flow and movement of people. Further, the report adds that the project passes through 164 spots declared hydrological environmental impact zones.

“It’s a classical recipe for a disaster. The project design has not taken into consideration the ecological and hydrological design of the area. One can build bridges to solve the issue of mobility for people, but that is not the solution for water bodies. Embankments, with a height of 1 to 8 metres above the maximum flood line (MFL) as proposed, would end up inundating the eastern side of the rail line, which may prove disastrous," says Radhakrishnan.

"The methods of soil piping and sheet piling would turn out to be hydrological disasters for Kerala. It will be the worst environmentally disastrous project ever in the state," says the engineer-turned-environmentalist, before warning that “one should not think that the environment can be engineered.”

Further, the REIA report itself predicts changes to land use within 500m of the line. Experts, however, warn that this could be more than 500m in reality.

Kerala is an urbanised state with limited transport requirements, says D. Dhanuraj, chairman of Kochi-based Centre for Public Policy Research (CPPR). “Hence, I don't think we need this project even in the future,” he adds before warning that the Kerala government should be wary of going down another rabbit hole of an infrastructural extravaganza that would deplete both finances and the environment. "A repeated mistake of successive governments is committing to projects that overburden the economy, rather than improving and expanding the readily available basic infrastructure," Dhanuraj notes. The state was already feeling the pinch of a slowdown induced by falling remittances from the Gulf when the pandemic wreaked havoc across global economies. The public debt of the state is expected to touch Rs 3.27 lakh crore in the current fiscal, almost half of the Rs 8.76 lakh crore GSDP. Add to it the fact that the project cost of Rs 64,941 crore is grossly understated and could go up as high as Rs 1.3 lakh crore, estimates by the NITI Aayog said.

The project estimates average daily passengers of 85,000. To put this in perspective, the Ahmedabad-Mumbai Bullet Train estimates average daily passengers of around 35,000. Sijo Kuruvilla George, the founding CEO of Kerala’s Startup Village and currently the executive director of Alliance of Digital India Foundation (ADIF), has a different take on the economics of it. "The number of passengers shouldn’t be a yardstick for public projects. Projects like SilverLine will essentially serve as multipliers in the system,” he says.

Radhakrishnan feels that a more desirable project for Kerala is one based on a comprehensive transport policy. Had it been part of a comprehensive policy, SilverLine project wouldn't have been proposed as a standalone project with a standard gauge. Rather, it would have been integrated within the existing railway line and not as a parallel line, he argues. Public policy researcher Dhanuraj echoes a similar view. "Transit is a critical element here. If the transit is complicated, one wouldn't want to take it," he says. So a passenger would still have to access a feeder service or an alternative mode of transport to connect with the national railways network for interstate travel.

Commencing construction of the standalone extravaganza is being looked upon with skepticism by a section of the society at a time when people are reeling under the pandemic after having lost lives and livelihoods. Most of the existing travel woes can be addressed by initiating steps to complete the available rail infrastructure in the state, critics of the project say. The total length of the rail network in Kerala is 1,045 km; the network’s 181 stations serve across nine routes, and connect all major towns and cities of the state except the highland districts of Idukki and Wayanad. The delicate topography of the two districts means that they do not find a place even in the SilverLine project. Hence, critics argue that the SilverLine that touches only one major centre in each district would not essentially increase connectivity. They suggest that a more economically feasible alternative would be for the government to focus on speeding up the doubling of the line, the work of which has been going on for almost 15 years now. The advantage—better utilisation of existing infrastructure.

Doubling alone can increase the speed of trains to at least 90 km/h, which means that the distance between Kochi and Thiruvananthapuram can be traveled in less than 3.5 hours as compared to the promised two hours by SilverLine. Further, the standard gauge SilverLine promises a maximum speed of 200 km/h  with an average of 132.5 km/h. Comparing this against the broad gauge Vande Bharat Express that now shuttles between Delhi and Varanasi with a maximum speed of 180 km/h and an operating speed of 130 km/h, shows that the highest speed promised by SilverLine is not in itself unique. It is something attainable even by a broad gauge train.

“Also, the government should do a study on the nature of travelers from Kasargod to Thiruvananthapuram. A majority of the passengers accessing the routes would be those who are either travelling to the airports or going to the Secretariat. With more thrust on e-governance, the need for the latter will also come down in the future. With most of the meetings moving virtual after the pandemic, the demand for a cross-state mode of transport would be lesser in the future,” Dhanuraj says.

However, George begs to differ. A Kozhikode native, his work takes him from his hometown to Thiruvananthapuram and Kochi frequently. “Virtual meetings and remote working might be becoming a norm, but there is no alternative to easily accessible and hassle-free connectivity. As far as that is missing, it is difficult to fully leverage the full-potential of a digital economy. In the existing system, it is easier for me to travel from Kozhikode (in north Kerala) to New Delhi than to Kochi. There is no reliable, convenient, and effective way to travel from north Kerala to the southern or central part of the state for that matter," he says.

The basic tenet of any growing economy should be easy access to basic necessities. Ease of mobility tops the list. “The fulcrum of a society is in reliability and safety. A knowledge economy should facilitate free and easy movement of people, goods, and ideas. Faster mode of transportation reduces wastage of time, and is long overdue in a state like Kerala that is looking to attract investments and talent,” George says.