Rajeev Chandrasekhar: Tech entrepreneur-turned-politician has his task cut out

The junior minister for IT could be Modi govt 2.0’s smartest move yet 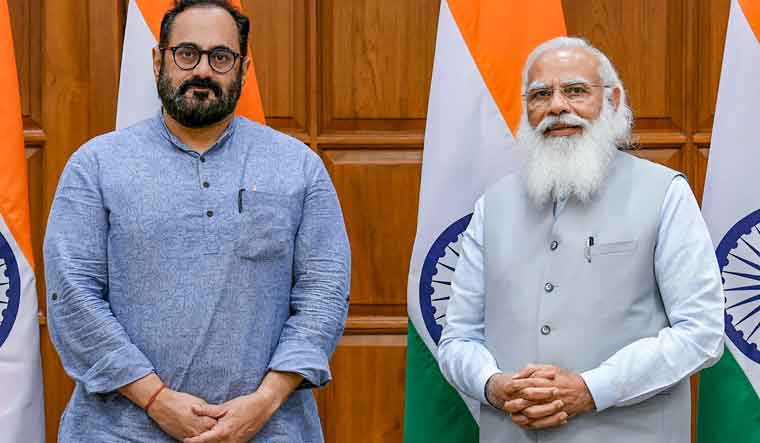 Three-time Rajya Sabha MP and serial investor Rajeev Chandrasekhar on Thursday took charge as the minister of state in the Ministry of Electronics and Information Technology following the cabinet reshuffle on July 7. It is no surprise that Prime Minister Narenda Modi reserved the IT ministry for Chandrasekhar, who describes himself as a tech entrepreneur on his website.

The Rajya Sabha MP from Karnataka has an interesting career trajectory. Born into a Malayali family, Chandrasekhar grew up across India as his father was an Air Commodore in the Indian Air Force. After completing his engineering from the Manipal Institute of Technology, he headed to the US where he completed his masters from the Illinois Institute of Technology.

Chandrasekhar belongs to the coterie of Indian techies who began their career from the Silicon Valley with Intel. He was a part of the team that developed Pentium chips. However, his stint at Silicon Valley did not last long as he returned to India in 1991.

In 1994, Chandrasekhar founded BPL Mobile, where he built what was then India's largest cellular network. He, however, exited the cellular sector in 2005, after selling his stakes in BPL for a whopping $1.1 billion to Essar Group.

In 2005, he founded Jupiter Capital, an investment and financial services firm, of which he continues to be the chairman of. Currently, Jupiter Capital has investments and managed assets of over $1 billion across sectors ranging from technology to transportation, logistical services to hospitality and entertainment.

However, he is not unknown to controversies, too. His own father-in-law had taken him to court over mismanagement at BPL before the company was sold to Essar. He also had a stake in Arnab Goswami’s Republic TV. However, in 2019, Chandrasekhar diluted its shareholding making Goswami a majority shareholder.

Chandrasekhar took his political plunge in 2006 when he was elected to the Rajya Sabha from Urban Bengaluru. He was re-elected again in 2012.

As a politician, Chandrasekhar has been vociferous on the subjects of internet governance, Aadhaar privacy issues and voting rights for Armed Forces. He has been particularly invested in policies and regulatory matters surrounding internet and technology issues. He was an Aadhaar critic during the UPA II regime. However, his concerns, he said later, had been addressed only after Modi became prime minister.

He has been a part of the joint parliamentary committee on Data Protection Bill, 2019.

Chandrasekhar was one of the earliest MPs to highlight the power of social media and tech platforms, and start a public debate about the need to regulate them. "It is fitting that India leads the way in addressing these challenges with the new intermediary guidelines. These guidelines harmonise offline and online rules. The same type of accountability and rules that applies to a broadcast TV platform will apply to digital platforms. It permits transparent self-regulation to evolve, and it also permits the continuation of the safe harbour under Section 79 as long as the platform exercises due diligence on its users — implying that platforms have to take responsibility for traceability in the event of inciteful and/or illegal content. These new rules are the right way forward and will continue to evolve," the serial investor wrote in an article in Hindustan Times early this year soon after the Centre revealed the new IT Rules, 2021.

He was also among the firsts in India to flag the emerging challenges of regulating crypto-currencies five years ago.

With the latest constitution of the IT ministry, the Modi government seems to signal that it is ready to take on Big Tech and industry with the experience and exposure. Chandrasekhar will be led by bureaucrat-entrepreneur-turned-politician Ashwini Vaishnaw who is the minister of both IT and Railways.

A former IAS officer, Vaishnaw earned an M. Tech degree in industrial management from IIT Kanpur and has an MBA from the prestigious Wharton School, University of Pennsylvania, where he focused on courses in finance and strategy. Soon after assuming office on Thursday, when quizzed about the Twitter issue, the technocrat said: "Law of the land is supreme. Everybody needs to follow it."

With Vaishnaw at the helm and Chandrasekhar as the junior minister, the Modi government is all set to put up a more informed approach to take on Big Tech in India.