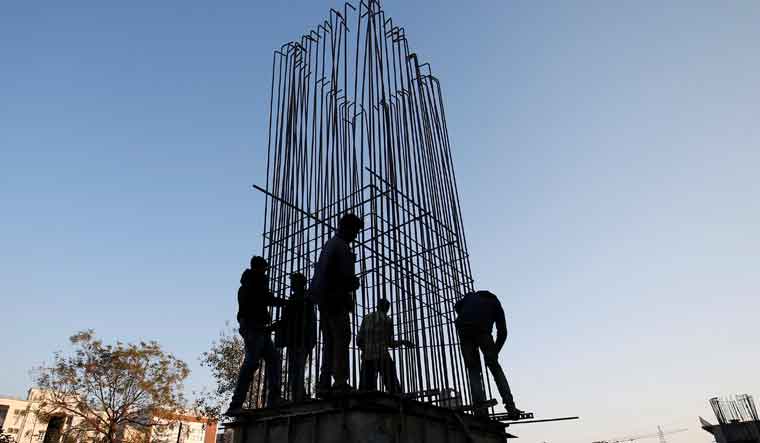 India's economy grew by 1.6 per cent in the fourth quarter of 2020-21, restricting the full-year contraction to 7.3 per cent, official data showed on Monday.

The fourth-quarter growth was better than the 0.5 per cent expansion in the previous October-December quarter of 2020-21.

The gross domestic product (GDP) had expanded by 3 per cent in the corresponding January-March period of 2019-20, according to data released by the National Statistical Office (NSO).

The NSO had projected a GDP contraction of 7.7 per cent in 2020-21 in its first advance estimates of national accounts released in January this year.

The NSO, in its second revised estimates, had projected a contraction of 8 per cent for 2020-21.

The fiscal deficit stood at 9.3 per cent of the Gross Domestic Product (GDP) in the last fiscal, better than 9.5 per cent projected in the revised estimates in the Union Budget in February.

Economic activities were severely hit in the last financial year due to the coronavirus pandemic as well as subsequent lockdowns and restrictions to curb the spread of infections.

Releasing the revenue-expenditure data of the Union government for 2020-21, the Controller General of Accounts (CGA) on Monday said the revenue deficit at the end of the last fiscal was 7.42 per cent.

In absolute terms, the fiscal deficit works out to be Rs 18,21,461 crore (provisional).

As per the CGA data for fiscal 2020-21, the tax revenue collection was 105.9 per cent of the Revised Estimates (RE) presented in the budget.

A total of Rs 5,94,997 crore was transferred to state governments as devolution of share of taxes by the Union government during 2020-21, which is Rs 55,680 crore lower than the previous year.

Out of the total revenue expenditure, Rs 6,82,079 crore was on account of interest payments and Rs 6,89,545 crore was towards major subsidies.

The output of eight core sectors jumped by 56.1 per cent in April mainly due to a low base effect and uptick in production of natural gas, refinery products, steel, cement and electricity, official data released on Monday showed.

The eight infrastructure sectors of coal, crude oil, natural gas, refinery products, fertilisers, steel, cement and electricity had contracted by 37.9 per cent in April 2020 due to lockdown restrictions imposed to control the spread of coronavirus infection. In March this year, the eight sectors had recorded a growth rate of 11.4 per cent.

"This high growth rate in April 2021 is largely due to low Index base in April 2020 consequent to the low industrial production across all sectors caused by nationwide lockdown imposed to contain spread of Covid-19 last year," the ministry said in a statement.