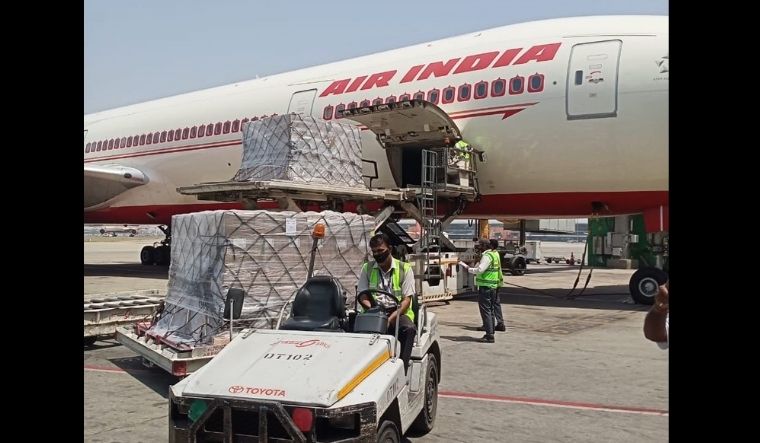 Air India pilots will "stop work" if authorities fail to set up the Covid vaccination camps for flying crew on priority, as a large number of crew of the national carrier returned positive results in recent months.

While demanding pan-India vaccination camps on priority, the Indian Commercial  Pilots Association has written to the Director (Operations) Air India saying, "Many crew have been diagnosed Covid positive and are struggling to get oxygen cylinders. We are left to fend ourself for hospitalisation."

"If Air India fails to set up vaccination camps on a pan-India basis for the flying crew above the age of 18 years on priority, we will STOP WORK," the pilots wrote.

"We (pilots and cabin crew) have gone above and beyond during this pandemic, risking life and limb to ensure our citizens well being. Due to unwavering support, Vande Bharat Mission (VBM) and relief operations continued to run smoothly even in the phase of resurgence of the deadliest strain of Covid-19," said Capt. T. Praveen Keerthi, General Secretary, ICPA, adding "all we got in return for our dedication and sacrifices is a massive discriminatory pay cut."

He further said that with no healthcare support to the flying crew, no assurance, and a massive opportunistic pay-cut, "we are in no position to continue risking the lives of our pilots without vaccination."

He also stated that their finances were spread thin covering "bedridden colleagues and provisioning for families, lest we inadvertently infect them with the deadly virus that is an ever present occupational hazard for us."

ICPA has also written another letter to Union Civil Aviation minister Hardeep Singh Puri appealing to reverse the pay cuts of Air India pilots and crew. In a tweet, Minister for Civil Aviation Hardeep Singh Puri had said earlier: “Vande Bharat Mission began during the first wave to repatriate our stranded and distressed citizens and has since then facilitated (the return of) nearly 82.9 lakh (8 million) people. Despite personal risk, the corona warriors of civil aviation ensure that the mission continues ahead undaunted.”

At least 30 people, including crew, traveling on an Air India flight from Amritsar to Rome last Wednesday have been tested positive for coronavirus infection on arrival, while all passengers on board the flight have been quarantined off for two weeks.