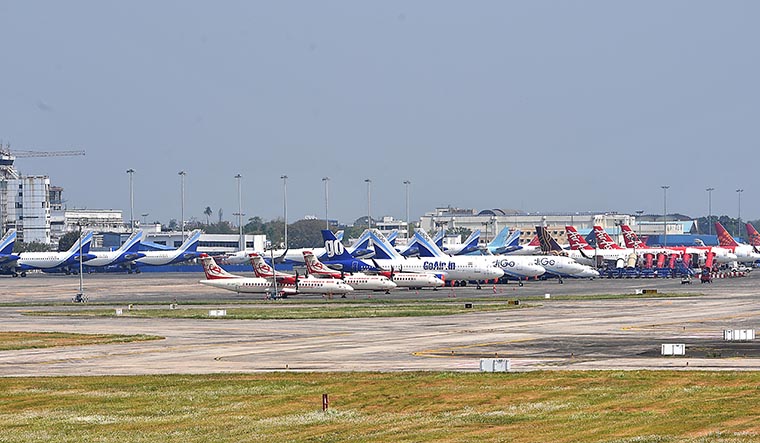 The COVID-19 pandemic hit the Indian aviation sector that was already going through a  turbulent phase. From reduction of high taxes and levies, the aviation industry is hoping for near-term support from the government in the upcoming budget 2021-22.

The aviation industry was anticipated to provide 98 million jobs and generate $5.7 trillion in GDP by 2036, according to a pre-Covid forecast. But, then came the pandemic that put the aviation sector in a state of uncertainty.

Now, the airlines are trying to regain their feet, as the domestic airlines across the country carried 55.6 million passengers from January to November 2020, nearly 58 per cent lower from what they carried in the same period last year, according to the data compiled by aviation regulator DGCA.

ICRA Ltd, a credit rating agency, in its report in December had anticipated a net loss of Rs 21,000 crore this fiscal year for Indian airlines due to travel restrictions. The industry will require an additional funding of Rs 37,000 crore from FY21 to FY23 to recover from the losses and debt.

Aviation experts believe that the government has to hand-hold the sector, which is battling to recover from high cost and debt burden. Measures such as lower tax on jet fuel and reduction in multiple operational charges, including parking, airport and landing, are the need of the hour, as per industry experts. Jet fuel, also called aviation turbine fuel (ATF) takes close to 30 per cent-40 per cent of the total cost of an airline.

ATF prices in India are 45-50 per cent higher compared to the international markets.

The Confederation of Indian Industry (CII), in its pre-budget wishlist sought an increase in the baggage allowance for purchase from duty-free shops in India. The suggestion is to hike from Rs 50,000 to Rs 1 lakh.

Kanika Tekriwal, CEO & Founder of JetSetGo Aviation, a Delhi- based private jet operator and manager, told THE WEEK that the upcoming budget should focus on extending lower rate withholding taxes that was decreased to 25 per cent of the standard rate. The demand is to extend it for another year till the market is fully recovered as this will increase liquidity in the hands of the company. "Another area to focus is on lowering the income tax rate on travel companies as it is very difficult to survive with a 30 per cent corporate tax rate due to the damage the aviation industry has gone through because of the pandemic. Also, the GST on the entire travel industry should be restricted to 5 per cent be it travel by private charter or commercial flights to decrease the costs of people travelling who do not get GST benefits and hence, a boost for the economy," she said.

Experts also feel that GST should be levied on fuel because a major expense for any aviation company is on fuel on which they pay VAT and excise that adds up to 35 per cent.

"If it can be covered under GST at 18 per cent, this will significantly reduce the costs of aviation on fuel by half and the tax collected at source (TCS) applicable on the foreign package to be deferred for a minimum of one year. Currently, a TCS is applicable at 5 per cent on the foreign packages. This has increased the cost of foreign traveller and hence, deferring it for another one year shall boost the aviation market," Tekriwal added.

Usha Padhee, joint secretary in the ministry of civil aviation, in a webinar, organised recently said that the government is working on a long-term plan to help the sector by rationalising various taxes. "We are looking forward to making the ecosystem smarter and more efficient to make the aviation sector sustainable," she said.