What is RCEP? Why didn't India join the pact? 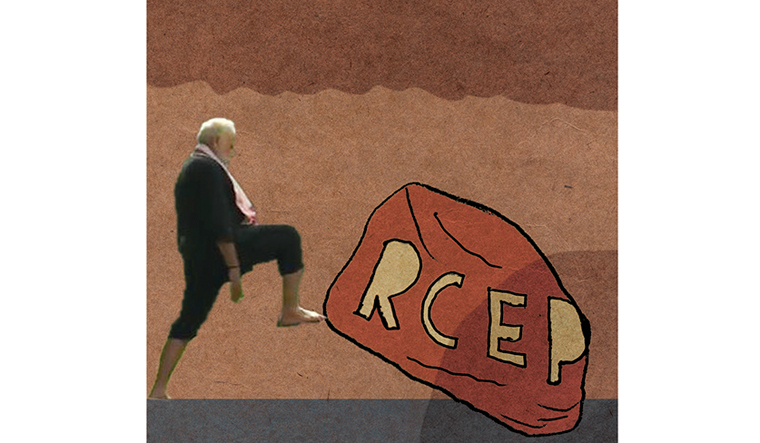 For the Modi government, no RCEP means it is the right time to act upon its calls for "vocal for local" and Make in India to boost local manufacturing | Illustration: Bhaskaran

On November 4, 2019, Prime Minister Narendra Modi surprised fellow members of the RCEP Participating Countries (RPCs) by choosing to opt out of RCEP at the Bangkok summit. A year later, 15 Asia-Pacific nations, including China, on Sunday signed the world's biggest trade agreement, the Regional Comprehensive Economic Partnership (RCEP), sans India with hopes that it will help recover from the shocks of the COVID-19 pandemic.

When India had walked out of the RCEP talks in November 2019, the understanding at that time was that it would continue to negotiate the main contentious issues, which mostly entailed greater market access for Indian goods and concerns over tariff. The COVID pandemic and India's border standoff with China, however, did not take the talks ahead. At the same time, India will have the option of signing it at a later date.

The agreement allows for common one set of rules of origin to qualify for tariffs reduction with other RCEP members. This means less procedures and easier movement of goods. That should encourage multinational firms to invest more in the region, including building supply chains and distribution hubs.

“…The present form of the RCEP Agreement does not fully reflect the basic spirit and the agreed guiding principles of RCEP. It also does not address satisfactorily India’s outstanding issues and concerns. In such a situation, it is not possible for India to join RCEP Agreement," PM Modi had said at the Bangkok summit last year announcing India's decision to pull out of the pact discussions.

One of the major issues India had was a potential threat to local producers as it believed that elimination of tariffs under RCEP would open its markets to a flood of imports. New Delhi was particularly concerned about the threat of circumvention of rules of origin due to tariff differential, inclusion of fair agreement to address the issues of trade deficits and opening of services.

The concern is palpable as the existing trade agreements and tariff liberalisation policies have led to cheap imports with widened more of cheaper products. The increase in import demand over the last 15 years shows that India's domestic industry has not been able to compete with the imports. As a result, the domestic market has seen an invasion of imported products, especially in the sectors of edible oil processing, automobiles, electronics, telecom and white goods.

For instance, experts warned that India’s large dairy industry would be impacted due to the RCEP as Australian and New Zealand producers could flood Indian markets and kill off mainly unorganised and inefficient small-scale Indian producers.

Had the Indian industry been competitive enough, a mega-trade agreement like the RCEP would have offered a barrier-free regional market for their products and would have been conducive for “Make-in-India”. The deal would have brought down import duties on 80 per cent to 90 per cent of the goods, along with easier service and investment rules.

Sadly, Indian manufacturers have not made the best out of the imports by making final goods at reduced prices.

The Modi government had also raised the issue of unavailability of MFN (Most Favoured Nation) obligations, where it would be forced to give similar benefits to RCEP countries that it gave to others. India also saw red flags over the move to use 2014 as the base year for tariff reduction.

The economic reasons listed, the single largest reason for India's reluctance to join the RCEP was China. New Delhi has decided it won’t join any trade agreement where Beijing is a member as matters have turned worse for India, especially after the Covid-19 pandemic and the ongoing border stand-off with China.

It is no secret that China’s presence in RCEP fits absolutely well with Beijing's market imperialistic designs with which they conceived of their Belt and Road Initiative.

India's trade deficit with China is a massive $55-60 billion. India has claimed that China has an advantageous position in the deal and would leave India in an unfair position amid the ballooning trade deficit.

India feared the agreement would become a free trade deal with China through the back door, even through other countries, which is one of the reasons New Delhi is currently reviewing a number of FTAs in the region.

How will not joining RCEP affect India?

According to critics, India might lose investments while its consumers may end up paying more than they should, especially when global trade, investment and supply chains face unprecedented challenges due to the Covid-19 pandemic. Critics, especially those from China, feel India will pay heavily for skipping the pact. China's state media publication Global Times wrote in its editorial that "the Modi administration has made a serious strategic blunder."

For the RCEP member states, they would lose out on an opportunity to access India's large consumer market that is notoriously hard to get into, especially during the current global economic situation.

However, for the Modi government, it presents the right time to act upon its "vocal for local" call and Make in India to boost local manufacturing. New Delhi has rolled out a number of incentives-based schemes for multinational companies to set shops in India, especially in the post-pandemic days.