Could this be part of Google's 'India Digitisation Fund'? 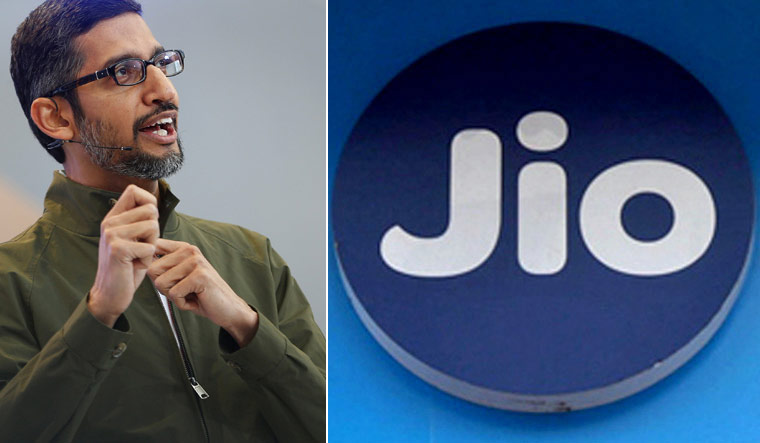 Days after announcing it would invest Rs 75,000 crore ($10 billion) in India, Google may now be eyeing a stake in Reliance Jio—joining the ranks of Facebook, the Saudi Public Investment Fund, Silver Lake, KKR and eight others as Big Tech takes out an increasing interest in India’s largest telecom provider.

According to a Bloomberg report, Google is in advanced talks to acquire a $4 billion stake (around Rs 30,100 crore) in Jio Platforms, with an announcement expected in the next few weeks.

The move, if true, would make Google the second-largest investor in Jio after Facebook, which has a $5.7 billion (9.99 per cent) stake in the same.

Google, while announcing the “India Digitisation Fund”, said the $10 billion would be disbursed over the course of the next 5-7 ears through a mix of equity investments, partnerships and operational, infrastructure and ecosystem investments. “This is a reflection of our confidence in the future of India and its digital economy,” Alphabet Inc CEO Sundar Pichai commented on Monday.

“Our goal is to ensure that India not only benefits from the next wave of innovations, but leads it,” Pichai said, “[Earlier] We always had to wait for technology. Now, new technology will happen in India first.”

Jio has around 400 million users in India. There have been 13 rounds of investment in Jio Platform over the last three months, with stakeholders including Facebook, the Saudi Public Investment Fund (PIF), Silver Lake, Vista, General Atlantic, KKR, Mubadala, ADIA ,TPG Capital, L Catterton, Intel, and most recently, Qualcomm. Reliance has raised nearly $16 billion from these investors in the past three months, helping it in chairman Mukesh Ambani’s bid to make the company net-debt-free nine months ahead of schedule.

Notwithstanding the company’s edge in the telecom market, Reliance has made moves into multiple segments: It recently launched JioMart, a bid to connect neighbourhood grocery stores with consumers; building on the company’s Retail arm (which itself is the largest organised retailer in India). The company has plans to expand into financial services (with Jio Payments Bank), acquisitions in AI, cloud solutions and IoT that could target small businesses.

In a letter to shareholders, Ambani in June wrote that the partnership with Facebook would “digitally enable and empower India’s 60 million micro, small and medium enterprises, 120 million farmers, 30 million small merchants and millions of SMEs in the informal sector, in addition to empowering people seeking various digital services”.

Interestingly, in May, the Financial Times reported that Google was also eyeing a 5 per cent stake in Vodafone-Idea—a move that would put Google in competition with Jio in the Indian telecom sector. Vodafone-Idea, however, later said that there was no such proposal being considered at the board.