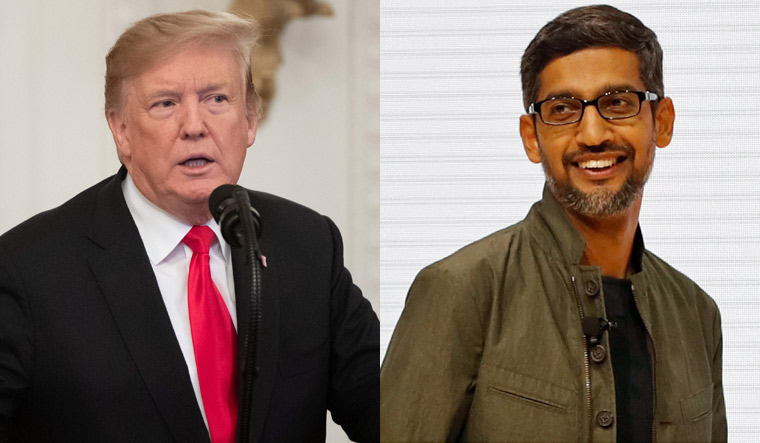 The Trump administration's decision to suspend the most sought-after H-1B visas along with other types of foreign work visas until the end of 2020 to protect American workers in a crucial election year has invited widespread criticism from the tech world. Companies such as Amazon, Google, Microsoft and Twitter lost no time to criticise the proclamation signed by President Donald Trump on Monday. Most of the mutli-national companies in the US owe their success to immigrant minds and hence, the foreign visa suspension at a time when businesses are trying to revive economic activities amid the COVID-19 pandemic will backfire, the companies warned.

"We oppose the administration's short-sighted action. Preventing high-skilled professionals from entering the country and contributing to America's economic recovery puts American's global competitiveness at risk. The value of high-skilled visa programmes is clear, and we are grateful for the many Amazon employees from around the world that have come to the US to innovate new products and services for our customers. Welcoming the best and the brightest global talent to the US is more important than ever, and we will continue to support efforts that will preserve their ability to strengthen our economy," Amazon, one of the first companies to react, said in a statement.

Google CEO Sundar Pichai, himself an immigrant who has, on a number of occasions, openly voiced his opposition to the US move to restrict entry of immigrants into the country, took to Twitter to remind the contributions of foreign workers to the US economy and emphasise the company's commitment to such workers. "Immigration has contributed immensely to America’s economic success, making it a global leader in tech, and also Google the company it is today. Disappointed by today’s proclamation - we’ll continue to stand with immigrants and work to expand opportunity for all," said Alphabet CEO Sundar Pichai.

Susan Wojcicki, CEO of Alphabet-owned YouTube, quote-tweeted Pichai and said: "Immigration is central to America's story, and it's central to my own family's story. My family escaped danger and found a new home in America. Sundar Pichai is right—at YouTube, we join Google in standing with immigrants and working to expand opportunity for all."

Echoing similar views, Microsoft President Brad Smith tweeted: "Now is not the time to cut our nation off from the world’s talent or create uncertainty and anxiety. Immigrants play a vital role at our company and support our country’s critical infrastructure. They are contributing to this country at a time when we need them most." The tweet was retweeted by Microsoft CEO Satya Nadella, another immigrant chief executive.

Twitter stated that the proclamation undermines the US's greatest economic asset—its diversity. "This proclamation undermines America’s greatest economic asset: its diversity. People from all over the world come here to join our labor force, pay taxes, and contribute to our global competitiveness on the world stage. Unilaterally and unnecessarily stifling America’s attractiveness to global, high-skilled talent is short-sighted and deeply damaging to the economic strength of the US," Twitter tweeted from its public policy handle.

Andrew Ng, the British-born Chinese American co-founder of e-learning platform Coursera, tweeted: "The suspension of the H1B visa program is bad for the US, bad for innovation, and will shatter dreams and disrupt lives. As a former H1B visa holder, my heart goes out to all the families affected."

In a strongly-worded tweet, Salesforce President and CLO Amy E Weaver said that her company would "remain committed to advocating for common-sense immigration policies". "H-1B workers generate innovation and growth that benefits us all and it will hurt the US economic recovery and US innovation leadership to further restrict H-1B visas," she tweeted.

Very much disagree with this action. In my experience, these skillsets are net job creators. Visa reform makes sense, but this is too broad.

Trump's proclamation has irked a lot of immigrants as well as entrepreneurs and venture capitalists in the Silicon Valley.

It’s pretty incredible how many of the smartest people in Silicon Valley came here on H1B visas.

The world is not zero sum.

I was on an H1B visa for 10 yrs. Started a company with co-founders also on H1Bs. Hired American employees, served US customers. This was our American dream.

But today the same company could be started anywhere. Why would the next generation bother if they can’t get a visa?

I came to the US on an h1b visa. I’d like to think I’ve been a net positive for the country.

I'm sad and frustrated to read about the temporary ban of the H1b program. I came here on an H1b and almost every immigrant friend I know did so too. We didn't steal jobs from Americans. The job market is simply not a zero sum game.

H1b visas are for "highly skilled" workers, ie those often with advanced degrees. The jobs left vacant will likely not go to "poor Americans" who wouldn't qualify for them, and will result in the loss of a ton of tax and consumer dollar to the US economy. https://t.co/ciOKR43bQY