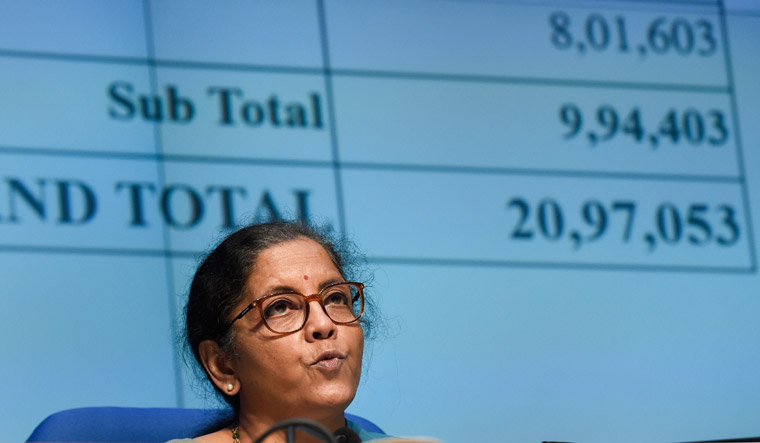 With the latest reform announcements, Finance Minister Nirmala Sitharaman on Sunday capped the five-part Rs 20 lakh crore financial package to revive the economy from the damage wreaked by COVID-19 and multiple lockdowns.

The centre announced states' borrowing limits would be raised from 3 per cent of the GDP to 5 per cent—but linked part of it to states having to enact further reforms.

The reforms were aimed at turning crisis into an opportunity, the government said.

Sitharaman gave out the final figure of the Aatma Nirbhar Bharat Package, saying that the economic component of five tranches is Rs 11,02,650 crore, while the rest was from earlier measures by the RBI (Rs 8,01,603 crore) including those announced as part of the PM Garib Kalyan Package (Rs 15,000 crore as health package, and Rs 1.76 lakh crore as relief package).

You can read the breakup of the Aatma Nirbhar Bharat package here.

The Finance Minister did not specify how much additional expenditure it will mean to the government, but a Barclays report estimated that the actual fiscal impact on the budget would be only Rs 1.5 lakh crore.

"We estimate that the actual fiscal impact on the budget will be only Rs 1.5 lakh crore (0.75 per cent of GDP), based on our calculations and assumptions made during the series of announcements," Barclays' Chief India Economist Rahul Bajoria said.

The package is a mixture of reforms, fiscal and liquidity measures. It disappointed those who have been asking for cash transfers to the poor and migrants—those who suffered the most because of the lockdown. Sitharaman said they have chosen a path which involved giving DBT transfers, free grains and LPG cylinders.

The last tranche had six other focus areas apart from MGNREGA: health, education, business, the Companies Act, the Ease of Doing Business and Central and State PSUs.

In many ways, the Finance Minister's detailed presentations over the last five days have been similar to and as comprehensive as presenting a new budget.

The main highlight of the fifth and final tranche of the package was giving AN additional Rs 40,000 crore for MGNREGS scheme to create employment for the migrants who have returned home—and who are expected to stay there till the end of the monsoon. The current budget had provisions of Rs 61,000 crore for the scheme. This allocation will help generate nearly 300 crore person-days in total. “This will address the demand for more work, especially for the migrant workers returning home,” FM said.

The migrants' issue has turned into a political slugfest with both Congress and BJP trading barbs. Sitharaman hit out at Rahul Gandhi, terming as drama his roadside meeting with migrants in Delhi returning to their home. She accused him of doing politics, asking why he wasted their time and not help them reach their destinations (though a PTI report says that Congress workers did, in fact, help the migrant workers).

She said the centre has started trains which the states were availing, adding that Congress-ruled states should ask for more trains to move migrants.

Sitharaman announced that measures would be taken to prepare for any future pandemics. The government will increase public expenditure on health and invest in grass-root health institutions. “All districts will have infectious diseases hospital blocks, and National Digital Health Mission blueprint will be prepared.”

In education, she said the government will create more content and platforms for online education through separate channels. “PM eVIDYA - a programme for multi-mode access to digital/online education to be launched immediately. It will include extensive use of community radio and podcasts. Special digital content for Divyang [those with disabilities] children. Top 100 universities will be permitted to automatically start online courses by May 30,” she said.

New reforms were announced to enhance Ease of Doing Business by announcing the suspension of fresh initiation of insolvency proceedings up to one year, while, COVID-19 related debt to be excluded from the definition of “default” under IBC.

The minimum threshold to initiate insolvency proceedings has been raised to Rs 1 crore from the earlier Rs 1 lakh. This will benefit most MSMEs.

The government also announced moves to decriminalise defaults under the Companies Act , with seven compoundable offences altogether dropped and five to be dealt with under alternative framework. Majority of the compoundable offences sections are to be shifted to Internal Adjudication Mechanism, which will thus help de-clog the National Company Law Tribunal.

In addition, Indian public companies can now list their securities directly in permissible foreign jurisdictions; Private companies which list Non-Convertible Debentures on stock exchanges will not be regarded as listed companies; new Public Sector Enterprise Policy will be announced where in strategic sectors, at least one enterprise will remain in the public sector but private sector will also be allowed, and other sectors, PSEs will be privatized.

FM announced that centre has decided to increase borrowing limits of States from 3 per cent to 5 per cent for 2020-21 only. “This will give States extra resources of Rs. 4.28 lakh crore. Part of the borrowing will be linked to specific reforms (including recommendations of the Finance Commission). Reform linkage will be in four areas: universalisation of ‘One Nation One Ration card’, Ease of Doing Business, Power distribution and Urban Local Body revenues,” Sitharaman added.

Initially, the States' net borrowing ceiling for 2020-21 was Rs. 6.41 lakh crores, based on 3 per cent of Gross State Domestic Product (GSDP). Of the total, 75 per cent thereof was authorised to them in March 2020 itself and timing is left to the States. The government said the states have so far borrowed only 14 per cent of the limit authorised, while 86 per cent of the authorised borrowing remains unutilized.