How practical is PM Modi's 'vocal for local' pitch?

As globalisation becomes a bad word, turning self-reliant is as challenging as ever 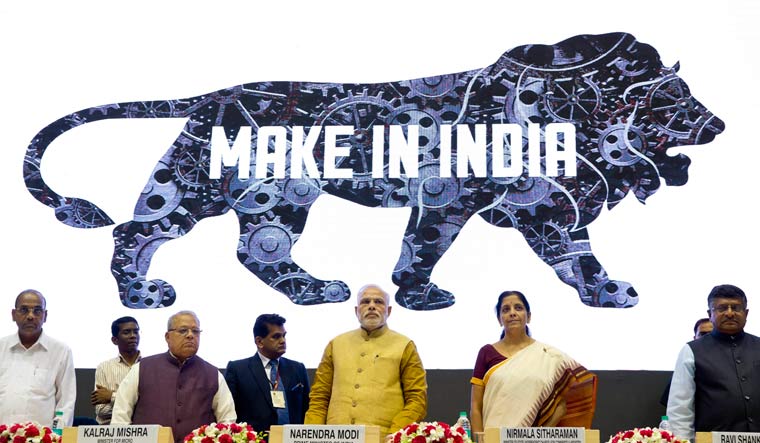 Mahatma Gandhi said it first. Swadeshi formed the bedrock of the father of the nation’s fight for Swaraj. But, the enemy then was a known, quantifiable force—a foreign subjugation. Fellow Gujarati Modi doesn’t have that advantage. His enemy is as much an invisible virus as it is the vagaries of economics.

So, the battle-hard prime minister has done what he does best—dug into his armoury of wordplay and come up with another alliteration: 'Vocal for local'.

“From today, every Indian must become vocal for our local,” Modi exhorted in his address to the nation on Tuesday night. “I request people to buy and endorse local products.”

But, how practical is it on the ground?

“If this is a retreat from globalisation, then this can be a slippery slope for Indian business and economy,” muses Lekha Chakraborty, noted economist and professor at the National Institute of Public Finance and Policy. “We should not be rocking the very foundation of the ‘open economy’ which has been built with careful calibrations,” she adds.

Modi’s move, of course, has an urgency to it. The pandemic has dramatically transformed the way India, and the world has been looking at the globalised economy with rose-tinted spectacles since the 1990s. Even the mighty US is learning the hard way how over-dependence on China, the so-called ‘factory to the world’ can be debilitating in a situation like this. What were you taught at school about putting all your eggs in one basket?

Nations all over the globe are re-configuring the way they do business. Globalisation is suddenly a bad word, and words like self-sufficiency, import substitution and the like—once much-loved mantras by post-colonial nation-states as much as back home by the regimes of Nehru and Indira—are suddenly now back in vogue.

Aatma nirbhar or self-reliance is not new even to someone with pro-business credentials like Modi—remember ‘Make in India’ which manufactured more lip service than actual products? But what the PM has done now is to astutely seize upon the present narrative to push for a bigger emphasis on local manufacturing (India’s is a services-led economy, the nation importing more than it exports). His larger objective, once you cut through all the rhetoric, is to push for a new form of global trade, where India is the new repository, a hub if you will, where the world comes to make, buy and trade. Can we be the next (and nicer) China, please?

But, all that has to start somewhere. The prime minister hopes Indians will convert this crisis into an opportunity by going local and buying and using products manufactured locally. Not only will it help in spending, an important requirement, if he wants the economy to be back on track in a jiffy, equally optimistic, is he of a production uptick riding on this surge.

The business leaders love it, of course. “Building a self-reliant India would take us towards becoming a credible global force that reaches out to the world from a position of strength," said ASSOCHAM Secretary General Mr Deepak Sood. “The Make In India flagship would be a key catalyst for new investment, be it local or global,” he says, while FICCI president Sangita Reddy adds, “Fully support the PM’s dream of a self-dependent India and ensure all measures to make this a reality.”

But what exactly does ‘vocal for local’ mean? While the finance minister’s relief package had some measures like no foreign bidders for contracts up to 200 crore etc, further details are ambiguous. Will there be sarkari diktats, just like Aadhaar and Aarogya Setu?

One of India's biggest consumer companies, Hindustan Unilever (HUL), manufactures locally even though its parent company is UK-based. “Does that make HUL a local company or a foreign company?” he asks.

Sharma adds, “Don’t think there is anything wrong in being inwardly focused economy while maintaining the diplomatic trade relationships. Even the US is now considering adopting that strategy,”

Chakraborty feels there are better ways to bolster the economy than rocking the foundations of India’s open economy. “Strengthen the ‘ease of doing business’ by adopting suitable policy measures in fiscal and legal realms, increase massive investment in public infrastructure which can 'crowd in' private corporate investment and (have) a calibrated monetary policy stance.”

Shenoy adds in, “It’s still a lot more difficult to export than it is to import, and still a lot more difficult to manufacture than it is to trade. That gap can be bridged by simplification of policy, removing the bad parts of labour and other laws, and by reducing red tape.” His surmise? “I don’t think India should be forced to go local, but [govt and businesses] should make it easier for us too.”