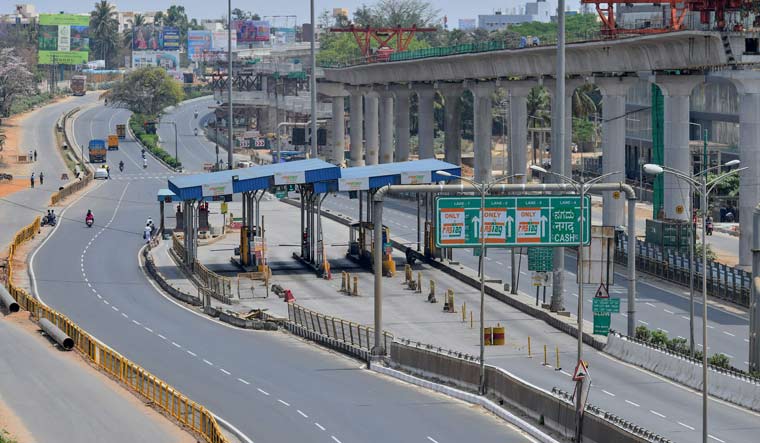 The 21-day nationwide lockdown announced by Prime Minister Narendra Modi has earned approval of most political parties in India. But a veteran economist in the US isn't impressed and warned that "chaos is around the corner".

Steve Hanke is a professor of applied economics at Johns Hopkins University. Hanke is credited with modifying and popularising the concept of 'misery index', an economic indicator that adds the unemployment rate to the inflation rate to assess how an average citizen in a particular country is doing. Hanke had also worked in the administration of US president Ronald Reagan in the 1980s.

In a number of tweets late on Wednesday, Hanke warned that "controlling 1B (1 billion) people is easier said than done. This is not #Kashmir..." referring to the prolonged lockdown in Jammu and Kashmir following the abrogation of Article 370 last year. Hanke claimed Modi had a "dry run" of a prolonged lockdown in Kashmir, but noted, "India's 1.3B people is over 100x Kashmir's population. Controlling them is a recipe for disaster."

#Modi ordered a 21 day #Lockdown in #India. He had a dry run with #Kashmir, where people are now starving & #Hospitals have become morgues. India's 1.3B people is over 100x Kashmir's population. Controlling them is a recipe for disaster.
#IndiaLockdownhttps://t.co/EY2KCJrU8l

"#India says it's the world's largest #Democracy. It's also the world's largest bureaucracy. Even more worrying is that it has only 0.5 beds per 1,000 people. SK has 12.3 beds per 1,000 people. A #Lockdown won't make more #Hospital beds. Disaster ahead," Hanke warned. The low number of critical care beds in India, estimated to be just 2.3 beds per 1 lakh people, has been flagged as a matter of concern by experts as India battles the coronavirus outbreak.

Referring to a news report of policemen assaulting delivery men carrying groceries, Hanke alleged the lockdown in India was "spiralling into chaos". Hanke wrote, "#India isn't only the world's largest #Democracy, but it’s arguably one of the world's largest #PoliceStates. Police are now assaulting delivery workers delivering #Essential goods. It has only been 1 day & the #IndiaLockdown is spiraling into chaos."

#India isn't only the world's largest #Democracy, but it’s arguably one of the world's largest #PoliceStates. Police are now assaulting delivery workers delivering #Essential goods. It has only been 1 day & the #IndiaLockdown is spiraling into chaos.https://t.co/X4rnKgT2IN

Hanke had previously tweeted that the Modi government's lockdown was a step in the right direction. However, he called for India to increase testing of suspect cases like South Korea did.

He argued a lockdown accomplishes little without increased testing of suspect cases. Hanke, tweeted, “#India is worryingly underprepared for the #Coronavirus. There have only been ~21K tests. In contrast, #SouthKorea tested 316K+ people. Without a thorough & rigorous #TestAndTrace program, a #Lockdown accomplishes very little.”

Hanke has been a critic of Modi on a range of issues such as the handling of the Jammu and Kashmir issue and his economic policies. On March 24 before the lockdown was announced, Hanke said Modi could become the "butcher of India" given the low numbers of people being tested for the novel coronavirus.

Hanke tweeted "@narendramodi is obsessed with PR stunts. His response to #Coronavirus has been expected, lacking in transparency & based on rhetoric. Testing is woefully low & unscientific treatments are touted. The Butcher of Gujarat may become the Butcher of #India."

In January, Hanke warned the Indian economy had the potential to grow at 8 per cent, but would struggle to reach 8 per cent growth in 2020. In an interview published on rediff.com, Hanke warned Modi was pushing India into a backwater by focusing on religious and ethnic issues.