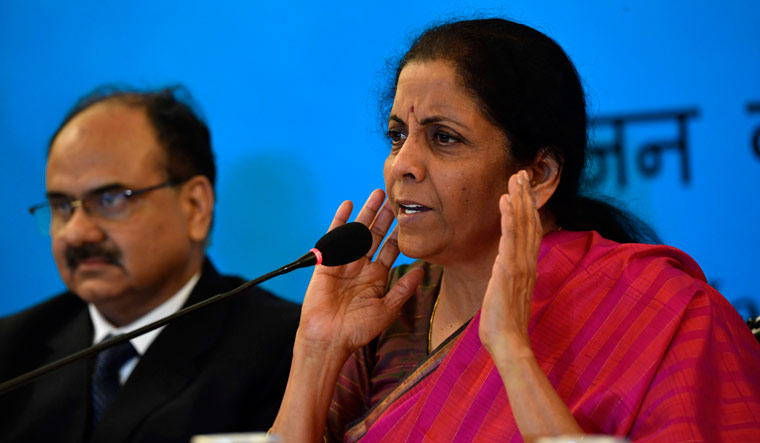 With the April 1 deadline for the mega merger of 10 state-run banks into four fast approaching, Finance Minister Nirmala Sitharaman on Wednesday asserted that there is no uncertainty about the consolidation process that is going on as per the schedule.

United Bank of India and Oriental Bank of Commerce would be merged with Punjab National Bank, making the proposed entity the second-largest public sector bank.

It was decided to merge Syndicate Bank with Canara Bank, while Allahabad Bank would amalgamate with Indian Bank. Similarly, Andhra Bank and Corporation Bank are to be consolidated with Union Bank of India.

"There is no uncertainty about bank merger... I must thank all the banks because through their boards they have taken that call. There is absolutely no uncertainty," she said when asked whether the government is reconsidering the proposed merger exercise.

"We are also conscious of extra load on them [banks] in terms of the kind of demands that I put on them. I have asked them to reach out to 400 districts, I have asked them to reach out to MSMEs, restructure their loan. So there is a lot of core banking work, which they are undertaking. I must be conscious of that also. So the merger and the decision taken by respective banks boards are all well taken. We are going as per schedule on that. There is no uncertainty on that. I am on course. There need not be speculation," she said after unveiling EASE 3.0, the Public Sector Bank (PSB) Reforms Agenda 2020-21 for smart, tech-enabled banking, and the PSB EASE Reforms Annual Report 2019-20.

Many people voiced concern about meeting the deadline for want of many regulatory approvals. However, the government may relax those approvals.

Even after cabinet approval to the proposed mega merger plan, officials said fixation of share swap ratio, shareholders' consent and other regulatory approvals are expected to take at least 30-45 days.

It is believed that the Prime Minister's Office (PMO) has sought details from these lenders about their financial projections for the next three to five years. Details in respect of NPAs, capital requirement, credit growth and cost savings on account of the mergers have been asked for, officials said.

So, chances of the merger becoming a reality beginning next fiscal year seems little unrealistic at the moment, a senior public sector bank official said.

Besides, regulatory nods, the scheme of amalgamation has to be laid before Parliament for 30 days for the perusal of the members. The second-half of the budget session is scheduled to start on March 2.

It was launched in January 2018 and the subsequent edition of the programme, EASE 2.0, built on the foundation laid in EASE 1.0 and furthered the progress on reforms.

Reform action points in EASE 2.0 aimed at making the reforms journey irreversible, strengthening processes and systems and driving outcomes. Public sector banks have shown significant improvement in the action points of the EASE reforms agenda since its introduction.

The improved financial health of PSBs reflects in many parameters including gross NPAs reducing from Rs 8.96 lakh crore (14.6 per cent) in March-2018 to Rs 7.17 lakh crore (11.3 per cent) in December 2019 and a sharp decline in fraud occurrence from 0.65 per cent of advances during FY10-FY14 to 0.20 per cent in FY18-FY20, due to fraud prevention reforms and proactive checking of legacy NPAs.

Besides, there was a record recovery of Rs 2.04 lakh crore in the first nine months of 2019-20 driven by newly set-up dedicated stressed account management verticals in PSBs that have recovered Rs 1.21 lakh crore in the same period and the highest provision coverage ratio of 77.5 per cent in nearly eight years.

After unveiling EASE 3.0, Sitharaman, along with MSME Minister Nitin Gadkari, held a meeting with the heads of public sector banks on the MSME sector.

The meeting reviewed loan restructuring, she said, adding that banks have been instructed to clear the pending cases by March 15.

As many as 5.28 lakh accounts have been benefited out of 5.53 lakh cases eligible for restructuring and the remaining cases would be cleared by March 15, Sitharaman said.

Later addressing an awards function in Delhi, Gadkari said the meeting discussed four key issues including how lenders can support micro, small and medium enterprises and quick implementation of restructuring of the debt scheme for units facing difficulties.

He said the issue of quick disbursement of loans by banks to MSME units under various government schemes was also taken up in the meeting.

"I am confident that MSMEs will certainly be facilitated through cooperation by banks," Gadkari said.