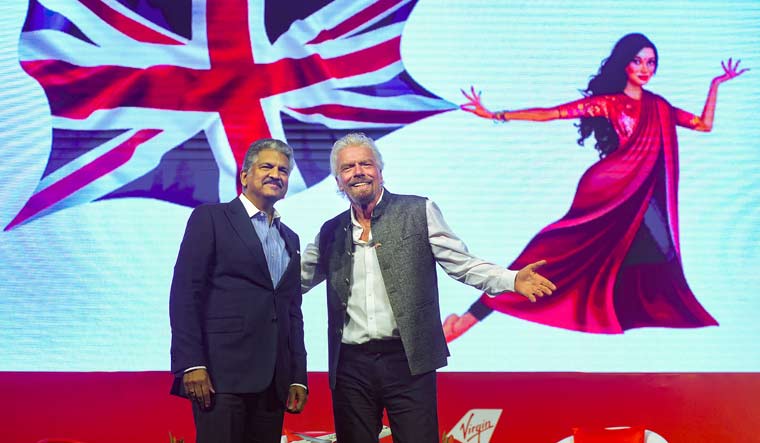 Anand Mahindra, chairman of the Mahindra group along with Virgin Atlantic founder Richard Branson during an interactive session at the launch of the Mumbai-London daily flight, in Mumbai, Wednesday | PTI

Anand Mahindra, the chairman of the homegrown auto group Mahindra &amp; Mahindra, on Wednesday admitted that entering the commuter bike segment more than a decade ago was a failure on the part of the group.

The group entered two-wheelers after buying out Kinetic Motors in July 2008 and relaunched the 'Freedom' bikes under the label of 'Mojo' but has not been able to make a mark in the vastly entry-model driven two-wheeler space in the country even after a decade.

The market is dominated by Hero Motorcorp and Japanese major Honda which together control close to two-thirds of the over 21-million units per annum market.

Of this, Mahindra sold a paltry 4,004 units in FY19, down 73 per cent from FY18. The only player in an over a dozen OEM market behind Mahindra is Kawasaki Motor which sold 3,115 units in the year, according to Siam data.

In the year to March 2019, according to the Saim data, the domestic two-wheeler domestic market stood at 21.2 million units, up 4.86 per cent from FY18.

Terming failure as "capital", just like financial and human capital, Mahindra said the learning from the commuter bike episode, which was a "product failure" led to the learning and entry into the premium two-wheeler segment where he claimed the group has been successful.

Mahindra said they entered the two-wheeler market with the confidence to "win", on the back of having a strong understanding of the ecosystem, distribution, R&D and also brand positioning.

"We knew our dream well and we had the right things, but how to win is where we went wrong. We should have never gone to the commuter bike side," Mahindra said, speaking at an event organised by British carrier Virgin Atlantic on looking at 'business as an adventure'.

Sharing the stage with the Virgin Group founder Richard Branson, Mahindra said they brought the premium Java brand to the country a year ago and seemed to suggest that it has been a success, stating that there continues to be a five-month wait for the cult bikes.

He also said they will soon be launching the BSA bikes, which was acquired earlier.

Meanwhile, amid a widespread slowdown in the auto sector, Mahindra claimed that "the most optimistic" people in his group today are those in the auto and farm equipment segments, as they expect sunny days to come back from April.

"...the most optimistic people in our group today are our automotive people. They've seen a good close in calendar year and they are hopeful of next year," he said, adding new emission norms from April will be the biggest demand driver for the company.

Similarly, in the farm equipment sector, Mahindra said the reservoir levels are good, winter crop harvest will be bountiful and hence, it expects a pick up in the tractor sales from April.

"Ironically, the two areas (auto and farm) where people think there is doom, but our people are beginning to smile again," he said, adding October sales were good on the back of festive demand.

However, the official numbers shared by the company for November 2019 are different with Mahindra's volumes falling over 9 per cent at 41,235 units.

Asked about the economy, where growth has slipped to a six-year low and pessimistic headlines galore, Mahindra advised everyone to have faith in their inner selves.

"Failure is hard to swallow. You have to go inside, and begin investing again. 'dar ke aage jeet hai', beyond the fear lies victory. That is just not a slogan. If we really go inside internally, and we as a nation have a great tradition to understand how to go inside, we find strength," he said.

He declined to answer specific questions on industry doyen Rahul Bajaj's comments on fear among corporate leaders, and also one on his opinion of bankers.

Mahindra said an entrepreneur has to take risks and termed the same as "fun", and that time has come for us to look beyond bottom-lines and into multi-stakeholder capitalism.