Market men are wondering what lies ahead for the grounded airline 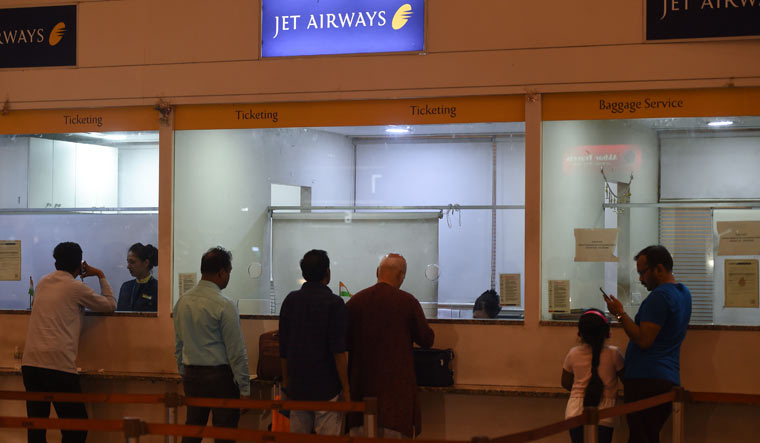 'Joy of flying' was the tagline of Jet Airways. But that joy vanished after the airline crash-landed on Wednesday, after months of turbulent weather, leaving in the lurch 20,000-odd employees, people who had bought Jet Airways' shares and passengers who had advanced tickets to fly for summer vacations.

Jet Airways shares sank 26 per cent to Rs 177.75, with market men wondering what lies ahead for the grounded airline.

Jet Airways had been struggling for months. The troubles began last year, when it reported a huge loss in the January-March quarter of 2018 in the backdrop of rising fuel prices and a depreciating rupee, which jacked up its operational expenses. Intense competition meant that ticket fares remained low. Jet Airways did take several restructuring measures to reduce internal costs, but it continued to make losses and increasingly failed to repay its lessors, who then grounded its planes. Salaries to employees also got delayed.

Jet Airways had a debt of around Rs 8,000 crore, plus the money it owed to lessors. It once had close to 120 planes, most of them leased; it was left with just five as its financial situation worsened. Naresh Goyal, who had started Jet Airways 25 years ago, finally agreed to step down as chairman of the ailing carrier on March 25, paving the way for its lenders to gain control of the airline. However, it now seems this move was too little, too late.

As part of the bank-led restructuring plan, lenders had said Rs 1,500 crore would be injected immediately into Jet Airways, while a formal bidding process to find a new buyer was kick-started. But, much of those promised funds never came as lenders bickered over putting more money into an airline that had hardly any collateral left to offer.

"Over the last several weeks and months, the company has tried every means possible to seek both interim and long-term funding. Unfortunately, despite its very best efforts, the airline has been left with no other choice but to go ahead with a temporary suspension of flight operations," a Jet Airways statement said on Wednesday.

Now, the hope is that a new buyer who can pump in money and fly Jet Airways once again is found soon. The State Bank of India-led consortium last week called for expressions of interest (EOI) from interested parties. Abu Dhabi-based Etihad, which holds 24 per cent stake; a couple of private equity partners, including TPG, and the National Infrastructure and Investment Fund are likely to bid for the airline. Goyal too had submitted his EOI, but has since pulled out.

Having received the EOI last week, the lenders have now issued bid documents to eligible recipients. The bid documents have solicited plans for a quick revival of Jet Airways. The bidding process is expected to be concluded on May 10.

The consortium of lenders said that they are "reasonably hopeful that the bid process is likely to be successful."

Jet Airways employee unions are going to meet the airline management on Thursday.