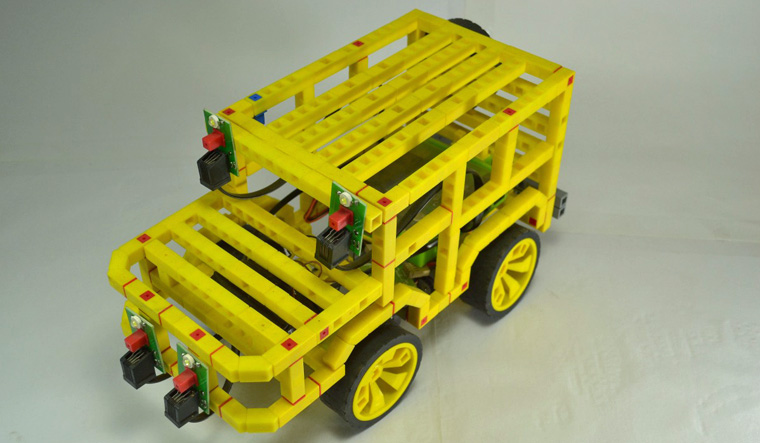 A robotic jeep | via www.qtpi.in

Bengaluru-based startup, QtPi, aims to bring innovation in robotics closer to kids. The company feels that personalised robots will become an integral part of everyone's life and would make life better the way computers, internet and mobile did to the world. The founders of the company believe that robotics will create new set of jobs and would make impossible possible and is the future so that children should learn robotics. The company's founders Jaison Leon, Raghunath Are and Anto Jerlin had experience in companies such as Microsoft, Yahoo, Oracle, Wipro and Tech Mahindra, and used to play with their children using various tech toys to instill creativity in them. It is due to such experiences they decided to start QtPi.

“To succeed in the new world, every kid need to be taught programming and unfortunately the way programming is taught is boring for kids. Every kid deserves a better way of learning programming. Robotics makes programming interesting for kids as they see their code moving things literally,” remarked Santosh Avvannavar, chief commercial officer of QtPi.

The company has indigenously designed a kit which contains building blocks and electronics that consists of a motherboard, plug and play sensors, actuators and a software platform that is drag and drop programming using which kids can build their own toys and control them using apps. “This tactile learning promotes computational thinking among children. The building blocks are simple and can create infinite shapes. Ours is the only company that has designed and developed the robotic kit for young children completely in India,” Avvannavar told THE WEEK.

Avvannavar feels that creativity is the key to success and is the only way to win against machines in the future. “Just the way ATM machines effectively replaced cashier jobs in the banks (most of the kids would be surprised to know that there was a profession like that), most of today's jobs will be accomplished by machines. People with computer programming skills are very well respected today and when children grow up, they will be building custom robots which could range from autonomous cars to DNA sequence editing nanobots. Primary education is where teachers can induce creativity and science in children. With the world swiftly moving towards automation, it is imperative to make the future generation ready with the skills required at the forefront of the fourth industrial revolution. We are thus aiming to make them solve real problems,” added Avvannavar.

The company also believes in the concept plug-play and innovate, and feels that the cost of quality education should not be taxing. This company has an offering 'QtSchool'(pronounced as “Cute School”). Under this programme, QtPi sets up labs in schools and deploys its trainers there. The school students attend 4-10 hours of classes per month. Besides this, the learning continues at home with online access to tutorials, teacher and student interactions, programming platform, quizzes, project presentations and engaging assessments. Parents get to know about their children's progress and area of interest from trainers and Artificial Intelligence (AI) based feedback system. Under the programme, reading material and notebooks are offered to each student. A bi-weekly newsletter “QtPi Buzz” carries the latest invention and project ideas. Selected project presentations are posted on QtPi Robotics Youtube channel on a regular basis and students are encouraged to experiment and participate.

The company also conducts evening and weekend robotics classes based on the QtSchool syllabus at their own franchise locations. The company also sells kits for parents where they can take an online course if the school doesn't offer robotics education.

Currently, the company has tied up with a few schools in Karnataka, Tamilnadu, Andhra Pradesh and Maharashtra. “More than 10,000 children from age of 7 to 17 have experimented with QtPi projects. We are expecting to tie up with around 100 schools by 2020. Our online platform is also expected to add 3 lakh paid customers by 2020. Additionally, we are setting up experience zone across India so that anyone can walk-in to learn robotics,” said Avvannavar.