President Kovind inaugurates 'One District One Product' Summit in UP 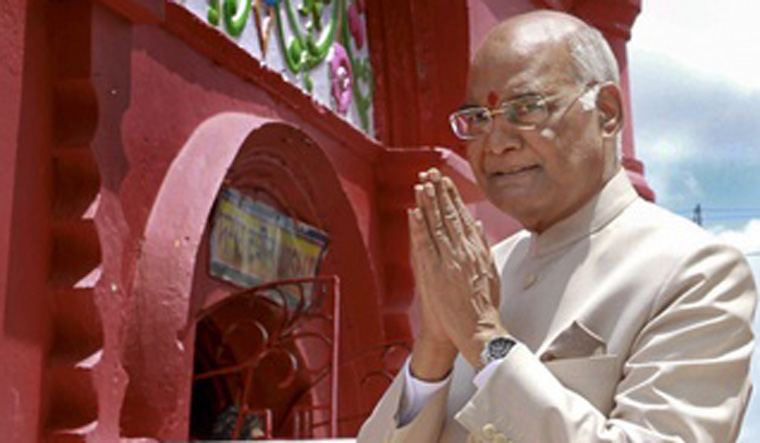 Describing the micro, small and medium enterprises as the backbone of the country's economy, President Ram Nath Kovind on Friday said these enterprises are "engines of inclusive development".

The President was speaking after inaugurating 'One District One Product' Summit organised by the Uttar Pradesh government to promote traditional industries in every district of the state. "Micro, small and medium enterprises are called the backbone of our economy. These enterprises are engines of inclusive development. After the agricultural sector, most people find employment in this sector.

"This sector generates more employment opportunities at a lower cost of capital. And the most important thing about this sector is that it creates jobs in rural and backward areas," he said. The President noted that Uttar Pradesh accounted for 44 per cent of the total handicraft exports of the country.

Industries such as handicrafts, food processing, engineering goods, carpets, readymade clothes and leather goods earn foreign exchange as well as provide employment, he said. "Therefore, this sector will play an important role in the development of Uttar Pradesh," Kovind said. He expressed confidence that the One District One Product scheme will enhance skills of local people as well as increase the reach of products. Besides, it will result in economic progress of artisans of Uttar Pradesh.

The President also noted that under the One District One Product scheme, the state government has set a goal of providing employment to 25 lakh people in five years through the financial assistance of Rs 25,000 crores. He hoped that this scheme will create large number of employment opportunities for the youth and strengthen the inclusive and sustainable development of Uttar Pradesh.

During the summit, with a tagline of 'Nayi Udaan, Nayi Pehchan', the President distributed loan sanction papers to some artisans. Loan papers amounting to Rs 1,006.94 crore are to be distributed to 4,085 artisans from 75 districts in the summit. The summit, which aims to give boost to micro, small and medium enterprises (MSME) is a corollary of the UP Investors Summit held in the state capital in February this year, followed by the groundbreaking ceremony for the launch of 81 projects in July.

The ODOP Summit is stated to be the first of its kind in the country and is expected to give a big boost to the MSME and handicraft in the state, Pachauri said.

About the objective of the ODOP, he said its aim was to optimise production, productivity and income, preservation and development of local crafts, promotion of art, improvement in product quality and skill development. The state government will sign memorandum of understandings (MoUs) with e-retailor giant Amazon for marketing of products of artisans, and Quality Control of India (QCI) that will ensure quality of products.

Amazon will train the artisans and small entrepreneurs of several districts, including Lucknow, Gorakhpur, Allahabad, Ferozabad, Moradabad, Agra, Kanpur, Meerut, Bhadohi and Varanasi, in getting their products listed on its marketing platform. Besides, MoUs will be exchanged with Wipro GE Health Care, National Stock Exchange and BSE at the event.

Technical sessions on handloom, textiles craft, tourism, agro and food processing, credit and finance will be held during the summit.