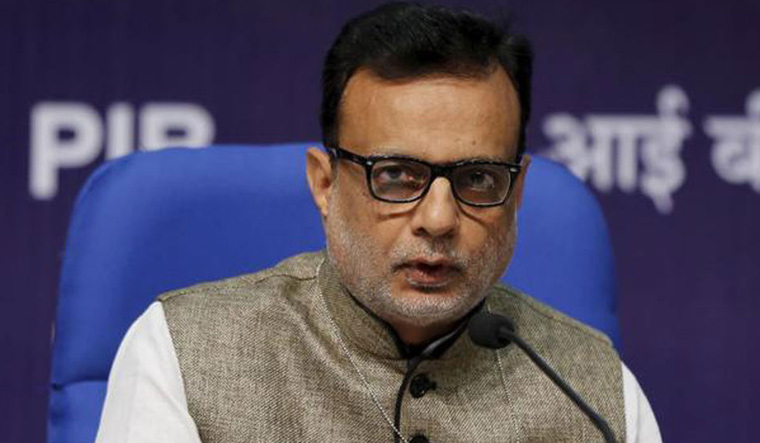 In a sudden turn of events, Rajeshwar Singh, a joint director in the Enforcement Directorate who probed the 2G scam and Aircel Maxis case, has launched a scathing attack on Revenue Secretary Hasmukh Adhia in a letter addressed to the latter. In in an apparent reference to the infamous Aircel-Maxis case involving former finance minister P. Chidambaram, Rajeshwar Singh has asked Adhia if he has developed animosity against the officer by "siding with scamsters and their affiliates".

The letter, however, was released soon after a vacation bench of the Supreme Court on Wednesday diluted immunity provided to Singh from any investigation against him and gave a go-ahead to the Centre to probe complaints of amassing disproportionate assets against him.

The letter written by Rajeshwar Singh, an erstwhile UP Police officer, to Hasmukh Adhia became public in social media through informal channels. In his letter dated June 11, 2018, forwarded to Adhia by Enforcement Directorate Chief Karnal Singh, Rajeshwar Singh posed a series of uncomfortable questions to Adhia, suggesting that his promotion was being delayed, national security compromised and scores settled because of an "ego trip".

Rajeshwar Singh has said, "It pained me further that you have expressed many a times to senior officers over casual conversations that I have been manipulating the judiciary, especially the Supreme Court of India."

"It is strange and also unbelievable that after so many years in public service, you believe that so many judges can be manipulated and that too over such a long period of time," he said.

The officer said journalist Upendra Rai, who was intimidating him and leading a malicious campaign against him, his investigations and his office, has access to corridors of power in the finance ministry.

"Your silence on this issue is misunderstood by many to be your implicit support for the fixers of his ilk to demonise officers who believe in their convictions," Rajeshwar Singh said.

He said Chidambaram "sported an open and direct grudge against him" because of the Supreme Court-monitored Aircel-Maxis investigation. "However, what thoroughly baffles the undersigned (Singh), is the animosity you have fashioned against me by siding with scamsters and their affiliates in a sustained manner. It has become more than difficult for me to survive this continued onslaught and persistent vilification from all the quarters for doing my job," he said.

Singh alleged his promotion became due from April 1, 2017 but it has not yet been processed in the ministry as officers close to Adhia are raking up complaints, leveled by journalist Rai, against him in the Central Vigilance Commission.

"I am astutely aware that this is being done to not just humiliate me but also to ensure that the investigation in certain crucial cases I handle, ought to derail. May I beg to ask if you are compromising on larger aspects of our national interest to set scores on an ego trip that is absolutely uncontested from my side," Rajeshwar Singh said.

Soon after the release of the letter, the Enforcement Directorate came out in support of Rajeshwar Singh, who has proceeded on leave, saying he is a responsible officer with an outstanding career record.

In its formal statement, the Directorate said, "To put the record straight Dr Rajeshwar Singh received a call in 2016 from a person based out of Dubai who gave important information regarding a case being investigated by the Enforcement Directorate."

"Dr Rajeshwar Singh passed on this information to the Directorate and the same was used in the investigation of the case. It is important to note that he received only one call and that too it was an incoming call from this person in Dubai," the agency said.

The Enforcement Directorate said the call from Dubai received by its Joint Director Rajeshwar Singh for which an intelligence agency generated a report was pertaining to an ongoing investigation.

The secret report was submitted in the Supreme Court by the Centre on Wednesday regarding Singh, who is investigating the Aircel Maxis and 2G spectrum cases.

A report related to the matter was generated by an intelligence agency about this call which was duly clarified by the Directorate that the phone call was related to an ongoing investigation. The matter was laid to rest, it said.

A vacation bench of Justices Arun Mishra and Sanjay Kishan Kaul, which was of the view that the sensitive matter involved national security, said the allegations against Singh were required to be looked into and the government should take a call whether he would have any role to play in the further probe.

Modifying its interim order granting Singh protection against an inquiry, the court referred to the Centre's affidavit which stated that it did not intend to protect anybody, including the high or the mighty, and observed that it was nobody's case that government was "seeking to thwart the investigation".

During the arguments in Supreme Court on Wednesday, Additional Solicitor General (ASG) Vikramjit Banerjee, appearing for the Centre, said the government was willing to probe the charges that Singh had amassed disproportionate assets, as he handed over a communication in a sealed cover to the bench.

After going through the report submitted in sealed cover by the central government, the vacation bench of the Supreme Court today said, "It is highly sensitive. Issues of nation's security are involved. These are serious issues. We cannot shut our eyes to it."

The bench observed, "As a matter of fact, when there is an allegation, whether right or wrong, against you (Singh), it has to be looked into".

"The other issue is that you should not be victimised. The third point is whether it would be appropriate for you to investigate when you are under a cloud and under investigation," the bench said, adding "the things which have come before us are startling".

No officer should be under a "cloud" and blanket clean chit cannot be given to anybody, the Supreme Court observed, as it told the government that it was free to look into the "serious" allegations against Rajeshwar Singh.

Senior advocate R.S. Suri, appearing for Singh, told the bench that there was a serious issue of maintainability of the plea filed by Rajneesh Kapur, who claims to be an investigative journalist who is seeking a probe against Singh for allegedly amassing assets which are disproportionate to his known source of income.

To this, the bench said, "We had given six months time (to CBI and ED to complete the ongoing investigation) and protection was granted (to Singh). This matter is highly sensitive from the country's point of view. We cannot just divulge the content of this (communication in sealed cover) to anybody. It may prejudice your client (Singh) also. It is not advisable that it goes into public domain."

"It is highly sensitive. Issues of nation's security are involved. These are serious issues. We cannot shut our eyes to it," the bench observed.

"The sensitive issue is the government's response which has troubled us. Something very serious is there. We cannot say that 'leave the matter' or tie the hands of the government," it said.

"Let there be a fair investigation and person, who is investigating, according to my opinion, should not have a cloud over him," Justice Mishra observed.

At the outset, Kapur's counsel claimed that after filing the plea, Kapur has been "gravely threatened" and sought protection for him. He also claimed that Singh has the "clout" and the top court's earlier order says no action can be taken against this officer.