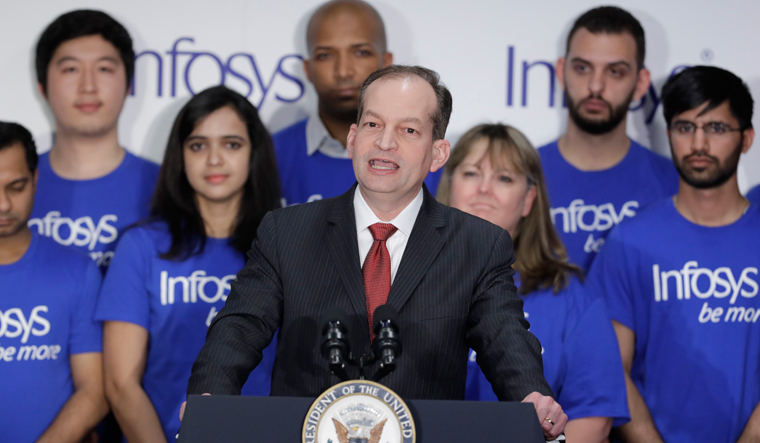 India's major IT company Infosys announced that it would open its US Education Center in Indianapolis, which the company said would train American workers and create 1,000 additional jobs.

The announcement made in the presence of the US Vice President Mike Pence comes a year after the company announced that it would establish an innovation hub in Indianapolis. In all, Infosys efforts in Indianapolis would create 3,000 new jobs in this state of Pence.

The development is a reflection of President Donald Trump's focus on job creation and making policies focused in this regard, he said. Pence thanked Infosys for joining Trump's agenda on job creation.

The US Education Center of Infosys spread over 125,000 sq feet at an unused terminal of the former international airport of Indianapolis.

Observing that this center will deepen roots of Infosys in Indiana, its president Ravi Kumar said last year Infosys made an announcement of committing 2,000 American workers in Indiana. This center would add another 1,000 local American employees in Indiana.

"We have announced additional technology and innovation hubs in North Carolina, Connecticut and if one of its kind design hub in Rhode Island. We have announced educational partnerships with Perdue, North Carolina community college system, and we're continuing to bear on bridging the skills gap in the United States," Kumar said.