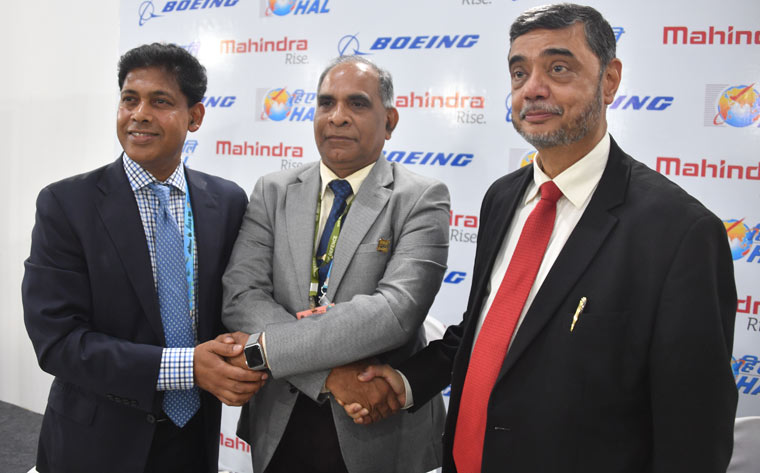 Within couple of hours after Prime Minister Narendra Modi assured foreign companies that his government would not spend a decade to decide on recently initiated process to get 110 fighter jets for the Indian Air Force, global defence giants enthusiastically came forward to make it into a reality.

Last week, IAF came out with a Request for Information (RFI)—the first ladder on the procurement process—expected to be worth $9 - 13 billion (Rs 584 – 844 billion). In what is considered to be the world’s biggest international fighter race for supplying 110 fighters, 75 per cent (82-83 fighters) would be single-seat aircraft while the remaining 27-28 fighters would be twin-seat variants. Only 15 per cent of the order to be supplied in “flyaway” condition and the remaining fighter jets must be built in India by a “Strategic Partner/Indian Production Agency (SP/IPA)”.

Speaking at the tenth edition of the DefExpo, being held in Chennai, Modi took a dig at the previous UPA government and said the issues that should have been addressed long back by previous governments, are being resolved now. The prime minister was referring to 126 Multi Medium role combat aircraft (MMRCA) which was started in 2004 and scrapped in 2015 after years of negotiations and trials with defence firms. It had made the foreign industry apprehensive about India's procurement plans.

The obvious reference has come as the foreign industry is skeptical that the tender is a re-run of the scrapped tender to buy 126 fighter jets.

"We have not only taken bold action to meet our immediate critical requirements, but have also initiated a new process to procure 110 fighter aircraft. We do not want to spend ten years in discussions without any tangible outcomes," Modi said while adding that his government will work with foreign companies with a sense of mission to keep the defence forces equipped with state-of-the-art systems, and to create the necessary domestic manufacturing ecosystem to achieve this. “In all our efforts to pursue efficiency and effectiveness in partnership with you, we will be guided by the highest ideals of integrity and probity,” he said.

Soon after PM assurance, global aerospace giant Boeing announced a partnership with Hindustan Aeronautics Limited (HAL) and Mahindra Defence Systems (MDS) for manufacturing the F/A-18 Super Hornet fighter jets in India for the armed forces and pursuing the joint development of future technologies as a push towards Make in India.

"Our partnership with HAL and Mahindra will enable us to optimise the full potential of India’s public and private sector to deliver next-generation F/A-18 fighter capabilities. Together we can deliver an affordable, combat-proven fighter platform for India, while adding growth momentum to the Indian aerospace ecosystem with manufacturing, skill development, innovation and engineering and job creation,"says Pratyush Kumar, president, Boeing India.

T. Suvarna Raju, HAL Chairman said: “This partnership with Boeing and Mahindra Defence Systems will create an opportunity to develop capabilities of the aerospace industry and strengthen indigenous platforms in India thereby contributing to the Make in India activities.” Raju also maintained that HAL is stepping up its facilities for producing LCA Tejas, as he claimed all the eight Tejas aircraft, which are in service with the IAF are flying three sorties per day with efficiency.

Boeing stated that the Super Hornet Make in India proposal is to build an entirely new and state-of-the-art production facility that can be utilized for other programs like India’s Advanced Medium Combat Aircraft (AMCA) program.

Similarly, the Swedish firm SAAB, which produces Grippen fighter jet, also offered to provide its upgraded version of Grippen E jets to India under the Make in India theme.

"SAAB can assure India that it has much more than just shifting the assembly to India. Innovate, design, develop, source, produce, test, support and to upgrade—all will be in India only. We offer transfer of critical latest generation technology to indigenously develop the the next generation fighter to India," said Mats Palmberg, vice president, industrial cooperation and head of Grippen program in India.