Speechless in the Sounds 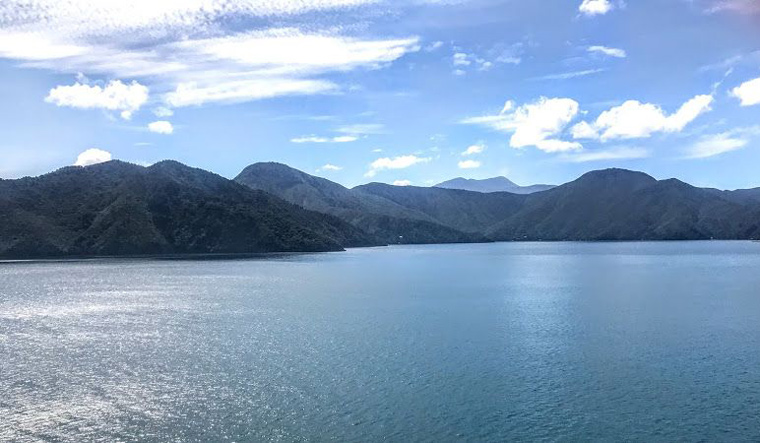 A strong ice-tipped wind is blowing through the Fiordland in New Zealand`s South Island when I board the launch that is to take me through the Milford Sound.

This is big sky country and the gigantic, chubby clouds moving at a rapid clip overhead makes for a most dramatic sight. Many of us have rushed onto the top deck amidst excited chatter and the pulling on of beanies and windbreakers. However, the moment the launch sets sail, a hush descends as people stare wide-eyed about them, the ubiquitous cameras and phone cameras raised to eye level.

The sky is a brilliant azure above us, the waters echoing that shade below. It is a glorious day and fittingly enough,  as we sail out, a clutch of bottlenose dolphins leap about our boat, eliciting a collective gasp of pure delight all across the upper deck. On our return, we watch as a small colony of seals sunning themselves on a boulder set to bullying an outsider, pushing him right off the stone! The Sound is home to whales, seals, dolphins and Fiordland penguins; spotting two out of that list isn`t too bad, I muse.

Since it is late summer moving into autumn in this part of the world, the sheer rock faces that tower on both sides are not coated with snow; instead, they stand stark, streaked green and brown, with a few waterfalls coursing down them. The Mitre Peak looms up but is not as austere or harsh as I had imagined it to be; instead,  it seems like a benedictory sentinel, calmly watching us pass. The Elephant Peak and the Lion Peak are other formidable cliffs that we glide between.

This Sound is apparently the wettest inhabited place in all of New Zealand and one of the wettest in the world. When it pours, the copious rains create a slew of  temporary waterfalls, all striating and crashing down the cliff faces from on high. The weather holds dry , though, so there aren`t too many waterfalls around. However, the two permanent ones, the Lady Bowen Falls and Stirling Falls, are putting on a magnificent display for us and I can feel the spray from the former on my face as we cruise close to it.

Strictly speaking,  the Milford Sound, Piopiotahi in the Maori language, is not a Sound at all, it is a fjord. A Sound is a large sea or ocean inlet larger than a bay, wider than a fjord, or a narrow sea or ocean channel between two bodies of land. Fjords, on the other hand, usually occur where ocean water flows into valleys formed near the coast by glaciers, and this is one such. 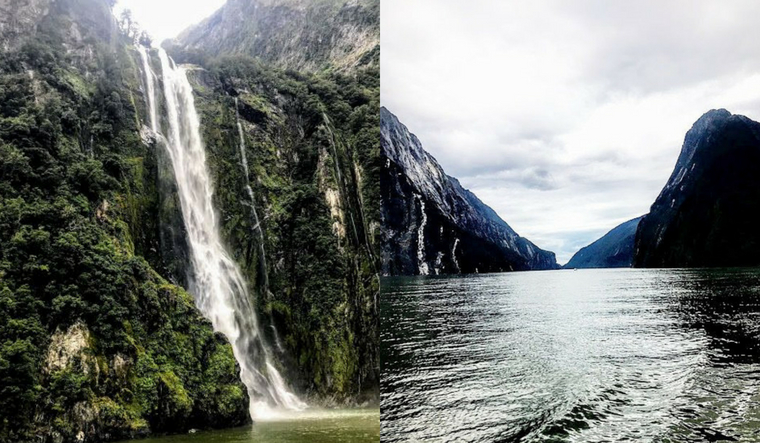 Fittingly enough, the fiord (as the word is spelt in New Zealand) was used frequently by the Maori, much before the advent of the European settlers. Then in 1812,  Captain John Grono discovered this series of glacier-fed inlets and promptly named it Milford Haven after his homeland in Wales. Captain John Lort Stokes later renamed it as Milford Sound.

The Milford Sound attracts more than one million visitors per year, making it one of New Zealand's top   tourist destinations. The Milford Discovery Centre & Underwater Observatory is a big draw, since it allows visitors to view the fiord's unique marine environment at a depth of ten metres.

Fjord or Sound, I won`t quibble; it`s a sheer marvel of nature. And it`s best appreciated in silence.

Back home in Bengaluru, I'd been searching for a pre-trip screen saver for my desktop and had chanced upon a glorious overview of the Marlborough Sounds. Now, on the Sounds itself, some of the topography looks familiar, others are breathtakingly fresh.

I am aboard the big Interislander ferry with its seven decks and here too,  I have eschewed the plush comforts of our coach`s company`s designated private cabin, choosing instead to stand on the viewing deck, the wind coursing steadily through my hair, watching the vessel make its steady way through the watery valleys of these Sounds.

The Marlborough Sounds are an intricate network of sea-smothered valleys at the very northern tip of the South Island of New Zealand. The Sounds were created by the rising sea levels and   the gradual caving in of land. The Maori mythology relating to this place is far more poetic: according to them, the Sounds are the prows of the sunken wakas (canoes) of AorakI, son of the Sky Father.

The Marlborough Sounds wind themselves softly and smoothly around a stupendous 4,000 kms of sounds, islands and peninsulas. We pass an endless succession of densely wooded hills and small picturesque bays; access to these, I am informed, are difficult and those who live in these isolated spots use boats to move to and fro.

The Sounds are home to the entire breeding population of the rare New Zealand king cormorant which nests on the rocky islets all around us. Several of the islands surrounding the Sounds are designated as predator-free sanctuaries for native wildlife.

Just like the Milford Sound, the Marlborough Sounds too, were first used by the Māori people long before the coming of the Europeans. Small populations of the Maori inhabited some of the hills that lie beyond the sheltered inlets. Then Captain Cook came to the Sounds in the 1770s, discovered a plant (Cook's scurvy grass) high in vitamin C which helped to cure scurvy amongst his crew, and then, on Motuara Island, he proclaimed British sovereignty over the South Island.

There is a reason we are cruising at a slow and steady speed. Environmental groups have consistently protested against the speeding ferries which they say damage marine farming areas, destroy crab breeding grounds and strip the local beaches bare of sand. Now the ferries move along at a sedate cruising speed which of course, is ideal for the tourist who wishes to savour the experience of sailing in the Sounds to the fullest extent possible and in the longest time possible, too.

The waters in the main channels of the Sounds are calm and I spot many a sailboat out and about. Cook Strait, however, is all about rough waters, strong currents and vortices, and even a ferry as large as the one I`m on, seems to rock and roll a bit.

Sure enough, there has been a famous shipwreck in the Marlborough Sounds, that of the Russian cruise liner MS Mikhail Lermontov, which collided with rocks and sank in 1986 at Port Gore, close to the mouth of the Queen Charlotte Sound. The ship is now a popular dive wreck.

My cruise is a lovely slow voyage, and my entranced gaze has not moved much beyond the teal blue waters, the formidably wooded hills, the shallow sandbars and bays. There are any number of birds wheeling at eye level, the seagulls screeching loudly and discordantly.  When we enter the Cook Straits which connects the Tasman Sea on the northwest with the South Pacific Ocean on the southeast, the waters immediately take on the hue of splashed ink. The sun is warm on my head but there is a fierce wind blowing that ameliorates the harsh glare. There are sailboats aplenty in the bay at Picton as we set off, then there are large vessels out on the horizon beyond Cook Straits and as we draw into the pretty Wellington harbour, jet-skis whiz all around us, their riders emitting whoops of exhilarated laughter.

On the viewing deck of the ferry, however, we remain a silent but deeply appreciative lot. It really is the best way to take in the Sounds.