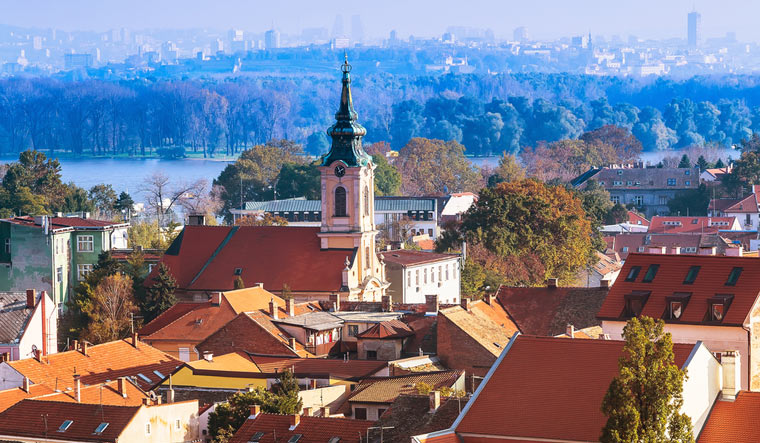 As I nip up to the cobblestones-paved Gardos Hill on the outskirts of Belgrade, the Serbian capital city, an enchanting view of terracotta-hued rooftops and the Danube riverside opens out before me.

I'm in Zemun, a border town that straddles the erstwhile Ottoman and Austrian Empires and stretches all the way from Old Belgrade across the azure expanse of the Danube. Located in one of the oldest parts of Belgrade, and wrapped around Gardos Hill, it is peppered with narrow lanes, quaint buildings and private residences painted in powder pinks, yellows and greens. Cafes do brisk business selling the famed Serbian espresso coffee as well as a variety of beers and German brews.

Gardos Hill is the perfect lookout point over the Danube. Right below me is a panoramic sweep of Belgrade with skyscrapers rising out of its concrete legoland. Across the Danube, beckons the bucolic landscapes of Vojvodina, one of South-Central Europe's most significant agricultural regions. Further afield lies the Great War Island, situated at the confluence of the Danube and Sava rivers.

Zemun leverages its riverside location to good effect. I see colourful boats clustering around its atmospheric shores taking tourists on cruises along the Danube. Fine dining restaurants offer delicious fish dishes and fine wines. Its old town is a historically preserved area which showcases life in the 18th and 19th century and was earlier known as Taurunum. Adjacent to the old town is the Zemun Quay, a popular walking zone in Belgrade. A slew of orthodox and catholic churches, an old post office, houses of traders from the 18th and 19th century, and a few schools add character to the landscape.

Zemun sits on layers of history. Ruled by the Romans, Byzantine and Austro-Hungarians, it bears eclectic influences on its architecture and culture. As I move my gaze around Gardos, the turreted, brick red and white tower of Janos Hunyadi or the millennium tower veers into view. It was built, the guide explains, in 1896 to celebrate a millennium of Hungarian settlement in the area. The 17th-century derelict hostelry Beli Medved (The White Bear), the oldest in Belgrade, sits adjacent. The Zemun cemetery located close to the millennium tower is where Orthodox Christians, Catholics, Muslims and Jews were buried.

"Until World War I, Zemun was a standalone town, the last frontier of the Austria-Hungarian empire," the guide elaborates as I soak in breathtaking views of Belgrade from Gardos Hill. "However, after the Second World War, New Belgrade was built between the two old towns, connecting them."

Zemun is today classified as a neighbourhood and municipality of New Belgrade. It became an official part of Belgrade in 1934 and remains fiercely independent to this day. Proud local residents spurn claims that their town is just a Belgrade "neighbourhood". To them, Zemun has its own distinct personality with deep roots that go back to Roman times.

After the Romans, the town passed through many hands—the Byzantines, Bulgarians, Hungarians, Mongols, Serbs, and Ottomans—before becoming part of the Hapsburg Empire. Despite multifarious ownerships, or perhaps because of it, Zemun's past is riddled with tragedy and tumult. Up until the 19th century, it was a quarantine centre for people travelling between the Austrian and Ottoman Empires. Travellers and tradesman alike would be lodged here for months before being cleared for further travel.

One of Zemun's architectural centrepieces—the Yugoslavia’s Air Force Command Building built in 1935—was also bombed during NATO's 1999 campaign of aggression against Yugoslavia. It now stands forlorn and abandoned.

After World War II Zemun was drafted into the Independent State of Croatia, a Nazi puppet regime, which granted permission for the establishment of the horrific Sajmiste concentration camp. During the first phase of the camp, from autumn 1941, Sajmiste primarily functioned as a "Judenlager" or a place to house the Jews rounded up in Belgrade in inhuman conditions. Later the camp saw extermination of an estimated 20,000 people, mostly Serbian Jews.

Today, however, there's little evidence of this turbulent history as there are no museums nor memorials in Zemun to commemorate the camp's victims. Perhaps it's a conscious effort on the part of the ruling political dispensation to eradicate this chapter from Serbian history?

Whatever it is, there's no denying that Zemun's history bestows upon it dignity and gravitas. As I bid adieu to the town that had me completely under its spell, I try to capture in my mind's eye its mesmerizing landscape where the air is rife with intrigue and time seems to stands still.