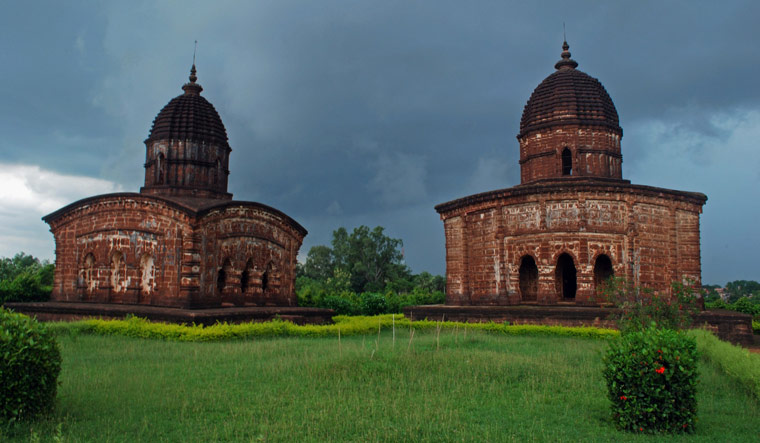 If you are a lover of history and art, you will get your fix if you travel to Bishnupur and Ambika Kalna in West Bengal. The monuments here sing a magnificent paean to a bygone era. The Rasmancha in Bishnupur, for example, was built in 1600 by the Malla king Hambir. It was where all the Radha and Krishna idols would be worshipped during the Vaishnava Ras festival. At first glance, the pillared hall looks like a step pyramid of Egypt or Mexico. Except it is built of brick and not stone.

Stone had always been in short supply in the vast flood plains of Bengal. Hence, the architects had to resort to a substitute. The easy availability of clay gave birth to a new type of temple architecture in the form of the elaborately decorated terracotta temples. Some of the more famous temples here are Shyamrai, Kestorai and Madan Mohan in the five-pinnacled, Jor Bangla and single-pinnacled style of architecture respectively. Their outer walls, which were built in the 17th century by the Malla kings, are ornamented with the most intricate terracotta work recounting mythological events and stories.

There is an interesting legend to the origin of the Malla dynasty in Bishnupur. In the 7thcentury, the wife of a Rajput king who was passing through Bengal went into labour. The king deserted her and continued on his journey. The wife gave birth to a son in the nearby village of Bagdi, who grew up to be a popular leader. Eventually, he founded the Malla dynasty in Bishnupur under the name of Adi Malla. When the Mughals invaded Bishnupur in 1574, the Mallas were ruling chieftains in the Rarh region of Bengal. They gave in to the dominion of the Mughals and enjoyed the patronage and prosperity of the Mughal empire.

Bishnupur will be like Disneyworld for terracotta lovers. There are small terracotta structures strewn all around, on playgrounds and in between peepul trees. Other than the larger terracotta temples, Bishnupur is known for seven single-pinnacled stone temples or Jor Mandir, a beautiful stone chariot, two gateways leading to the town, and the massive Dalmadal Canon. Built in 1742, the canon weighs 112 quintal, and legend has it that when the Marathas attacked Bishnupur that year, Lord Madan Mohan, an avatar of Krishna, himself fired the gun.

The town is also famous for its terracotta artefacts; special cards used to play dashavatar, a traditional game of the Mallas; and the Baluchari sari, with its designs inspired by mythological scenes carved on the temple panels. 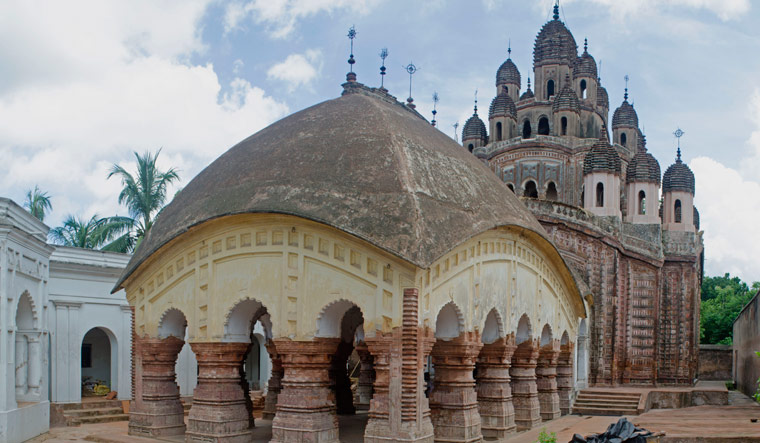 Ambika Kalna, another temple town of West Bengal located 82 kilometres from Kolkata, is lesser known than Bishnupur. As a result, it has been relatively unsullied by selfie-clicking tourists and guides reeling off facts that are more fiction. You can revel in its old-world charm without being disturbed by the cacophony of your surroundings.

As you near Ambika Kalna, the lush landscape gives way to narrow and cluttered bylanes. It is not just geographically that you travel; it is historically, too, as time dissolves into another era. Ambika Kalna is one of the oldest towns of the state, dating back to a thousand years. Two 10th and 11th century Bishnu idols were recovered around 50 years ago from the Bhagirathi river flowing by the town. A 1660 map of Bengal mentions the place as Ambowa. Most of the important temples of Ambika Kalna were built by the kings of Bardhaman in the 18th and 19th centuries.

The 108 Shiva temples here are arranged in two concentric circles, in the pattern of the 108-bead prayer garlands of the Hindus and Buddhists. There are 74 temples in alternating black and white Shiva lingams in the outer circle, and 34 in white in the inner. The temples were built in 1809 by the Bardhaman king Tej Chandra Bahadur. The place once flourished as a prosperous port town and reached its pinnacle of glory in the 18th century under the patronage of the maharajas of Bardhaman. The temple complex has been beautifully maintained with paved pathways and manicured lawns flanked by flower beds. Ambika Kalna is one of the few places where modernity and tradition co-exist without grating against each other.