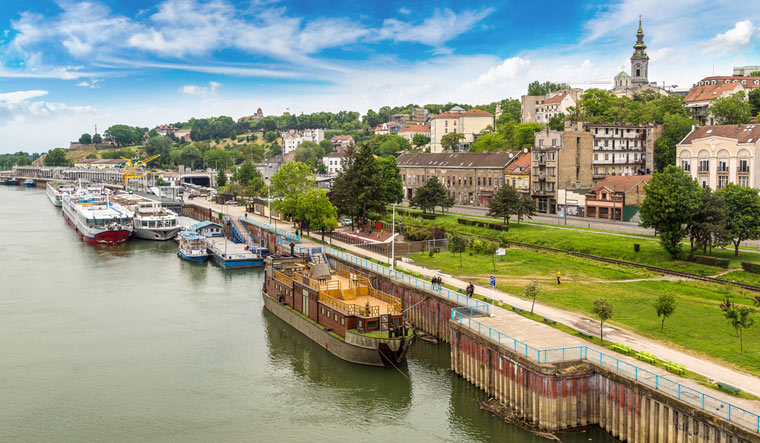 Creaking trams and trolley buses trundle down the gritty streets. As we walk along, open air cafes, ice cream shops and buskers playing music on accordions, remains the omnipresent motif. Locals seem to love their dogs and they are allowed in cafes and restaurants too. I am in Belgrade, the capital of the landlocked country of Serbia, located at the confluence of the Sava and Danube rivers. I arrive here taking advantage of the Serbian government’s recent waiver of visa to Indian travelers.

This resilient city with a tumultuous past is one of the oldest cities in the world, settled by Celts in the third century and then the Romans who built a fortified camp on the hill overlooking the Danube and Sava rivers. The city is a survivor—it has been razed and rebuilt more than 44 times in the past.

History whispers from every corner of the city—from the stark shell of the Yugoslav army building that were bombed by NATO in 1999 and stands in mute testimony even today, to the Soviet style apartment blocks of New Belgrade (which used to be a swamp before it was reclaimed) and the chandeliers made of bullet casing and gun parts in Ruzicka Church. But there is also a spark of hope and freedom that echoes everywhere—from the raucous bars and coffee houses filled with people to the gypsy bands playing lively, foot tapping music.

My home away from home is the Metropol Palace built in 1950, with wooden panels and chandeliers, which has played host to celebrities from Nehru and Che Guevara to Brigitte Bardot. In the 60s and 70s it was the stylish place for people to have a coffee or meet friends.

My local guide Bojana Sestovic, starts our tour at the Republic Square, with an equestrian statue of Prince Mihailo who was the person responsible for expulsion of the Turks. “This is the favourite meeting place for the locals –‘by the horse’,” she says with a smile. We walk to the medieval core of the city—the Kalemegdan Fortress and Park which was once established by the Celts and then a Roman outpost, and the park with its medieval fortifications. It was built to defend the city from the Ottomans but later it was invaded by them and converted into a defensive outpost. I see souvenir stalls where an old woman with a headscarf attempts to sell me 500 million dinar notes that were issued during the country’s hyperinflation in 1993, as a souvenir for just 5 Euro!

We walk through parks, wooden bridges, and gates to reach the citadel. Against the ramparts are army tanks and cannons which are part of the Military Museum which has on display, weaponry from Roman swords and Serbian suits of armour to spears and bombs. At the end of the park is a towering nude statue- the Victor Monument designed by artist Ivan Mestrovic to commemorate Serbian victories in the Balkan wars and the victory over the Austrian Hungarian Empire. This was supposed to be a part of a decorative fountain but was rejected by the scandalised public ‘because it was a bad influence’. Today it’s placed high above the park and has become an icon of the country.

For an architecture buff like me, Belgrade’s cocktail of styles is attractive. Some of the prettiest buildings are found on Knez Mihailova Street. This long, pedestrian street is lined with historical buildings embellished with intricate carvings—from Neo Classical mansions to ornate Renaissance stunners. We walk down to the Kosancic Circle—a cobblestone lane peppered with old family homes. Many movies have been shot here; this was the area where the Serbs first settled when the Turks settled around the fortress.

Close by is the Residence of Princess Ljubica which was built by Prince Milos in 1831 and is the work of Hajji Nikola Zivkovic, the first architect of free Serbia. I admire the classic rooms of this wooden structure which is a museum of 19th century Serbian homes today- they are furnished according to the different historical times in the city, with period furniture from the royals and Belgrade’s rich families. 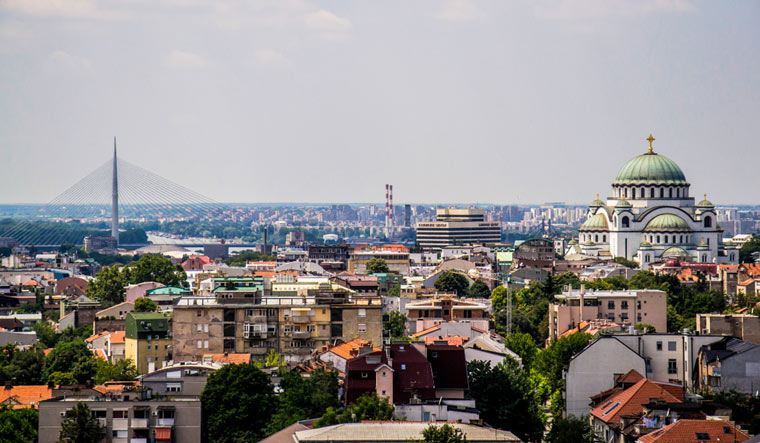 The city has a distinct café culture which dates back to the Ottoman period. Coffeehouses called kafanas were introduced by the Turks in the 20th century; these kafanas became a popular meeting place for Serb nationalists. We settle down for a coffee at a café on Kralja Petra, with old oak tables, sepia images of the city and souvenirs from the past, whose name translates as a ‘question mark’. They say that the owner named it after the Catholic Church across the road and when it was criticized, he defiantly changed the name to a question mark!

But the prize for the most stunning building goes to the Cathedral of St Sava built on the site where it is said Turkish invaders burned the relics of Saint Sava who founded the Serbian Orthodox Church. This is the country's most important church and a symbol of faith and freedom—with a marble facade and a 4,000 ton Neo- Byzantine copper and marble dome, the church can accommodate 10,000 worshippers at a time. It’s a perpetual work-in-progress and has taken a century to build and is still under construction. I watch worshippers light candles under the scaffolding reaching up to the golden painted dome; I am awed by the underground crypt with stunning gold chandeliers, Murano glass mosaics and gargantuan frescoes.

One of the best parts of my Belgrade sojourn is the afternoon spent crossing the River Sava to the old village of Zemun, now a suburb of Belgrade. Zemun was an independent town till the 50s and part of the Austro- Hungarian Empire, and this independent streak remains even today. Cobbled streets lined with fish restaurants, cafes and charming trader’s houses from the 18th and 19th centuries, a quay along the Danube lined with cafes and populated with joggers and dog walkers; I climb the hill to Gardos tower built by the Hungarians, for a panoramic view of orange tiled roofs and the Danube meeting the Sava River.

Come night the city transforms into one big party scene: Skadarlija is Belgrade’s bohemian quarter and its answer to Montmartre—we walk down the cobblestone street with wrought iron lamps, buildings festooned with graffiti, and traditional taverns called kafanas, nightclubs, live folk bands and free flowing Rakija- the grape brandy. We end our night at Breton Hala the regenerated warehouse district near the Sava River. Street art enlivens grey concrete and the young and beautiful dance and dine the night away. In Belgrade, the party is just beginning.