Ghent is often referred to as the hidden treasure of Belgium. A lesser-known university town, which is overlooked in elaborate itineraries, Ghent happens to be an eclectic blend of traditional and modern. Dominated by the Gothic Bell-tower, the Belfry and the medieval count’s castle, the town is all about cobbled streets, narrow lanes, gliding tramcars and meandering canals.

I arrive in Ghent on a sunny morning on a train from Brussels. The train (I took it from the Brussels Midi station) was packed but I had been lucky to find a window seat. It would not have mattered though, for barely had I been able to take in the storybook landscape when the station was announced. A little disappointed, I de-boarded. I had expected everyone else to get off too but hardly anyone did. They were, it seems, headed to the next destination, the ever-popular Bruges. “To get to Ghent, you can take a train from Brussels Midi; the same train will take you to Bruges too.” I remember my Airbnb host, John, telling me even as I walked out of the station wondering if I should have also headed straight to Bruges instead, it is more popular after all.

My doubts are laid to rest as I stepped out of the station. The town looked inviting and friendly. With fascinating brick-coloured houses—the kind I had only seen in pictures until then—and juxtaposed against them, slick trams and buses gliding on cobbled streets, it was rather beautiful too. I took one such tram to arrive at the town centre.

The town centre, or town squares in Europe have an old world charm about them. Stepping into one is like stepping into a time wrap—bell towers, cathedrals, townhouses, and marketplaces transport you to the medieval ages. If not for modern cars and people, you may as well believe that you are in another age. Ghent is no different. With a castle dominating the skyline, and a canal meandering through, it turns out to be one of the quirkiest town squares I have set my eyes on.

My first stop is the Castle of the Count. Built in 1180 by Count Philip of Alsace, the castle is small and compact, and is known for its role in Flemish history—it has served as the home of the counts, a prison, a court, and even a cotton factory. Presently it houses a compact museum. The torture chamber from the medieval ages is replicated on the top floor with weapons, models and methods of coercion; arms are displayed a level below. A walk through the rugged fortress confirms that it was built to intimidate the people rather than protecting them. The best thing about it, however, is the view of the town from the top. One can see the belfry, the cathedral, the canal, and the beautiful 18th century gabled houses.

Not very far from the castle stands the majestic St. Bavos’s Cathedral. “The Gothic church is home to some of the world’s most famous art pieces The Adoration of the Mystic Lamb by the Van Eyck Brothers happens to be the most precious of those. The painting, made in 1432, is touted as the most influential painting ever made, and has been stolen a record number of times and is considered the prde of Ghent. Nearby the Belfry stands tall. A UNESCO world heritage site, the Belfry is a majestic sight, climbing it however is not for everyone, with 350 steps to conquer, I chose to give it a miss and walk around.

Ghent may have a rich history and great cultural standing in Belgium, but it also has a cool vibe about it. Being a university town, it is hip, trendy and contemporary, especially in summer when the entire town, and the tourists, are out and about. Cosy lunch spots, hole-in-the-wall cafés, and gourmet restaurants are brimming with people, streets are overflowing with tourists, and trams have no space to stand—quite a contrast to the empty railway station of the morning.

I am now in the narrow cobbled lanes of the old town rubbing shoulders with locals, students, tourists, and the tramcars. Bikes glide past me, even as the shoppers strut around in high heels and designer dresses. A lady plays guitar on a corner; a gentleman sells Cuberdons nearby. Boats sail on water; tiny dogs trot past.

Ghent is known all over Belgium for shopping. Designer stores stand proudly alongside independent boutiques, branded shops and large chains. The main shopping street, Veldstraat, is pedestrian only and lined with retail chains. It is also a haven for people (like me) who can neither afford to shop from a chic boutique nor a designer store but must shop nevertheless. I spend the rest of the afternoon collecting lotions and potions of every kind from Kruidvat, Chocolates and preserves from Carrefour, and knick-knacks and gifts from Hema—all popular chains. 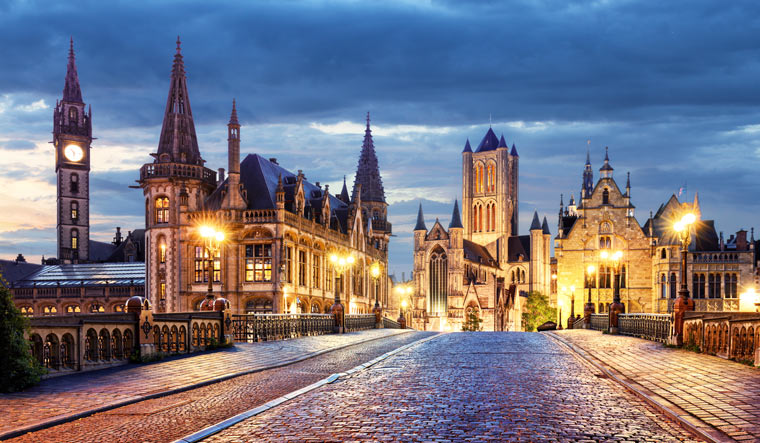 While it is upbeat and touristy during the day, Ghent becomes dreamy in the evening. Tiny watering holes fill up; alfresco cafés come to life. The lights glimmer in water, and the skyline sparkles in the dark. I am now at Paterschol, a web of cobbled paths in the shadow of The Count’s Castle. This neighbourhood was once a run down ghetto of leather traders, now, it is known for its bohemian charm. As I wander in the picturesque lanes, looking up at the crumbling yet beautiful facades of medieval buildings, munching on my fifth portion of fries, I am only glad that I did not skip Ghent this morning. I would have never known what I had missed.