Bhagyalakshmi now plans to create a number of rums 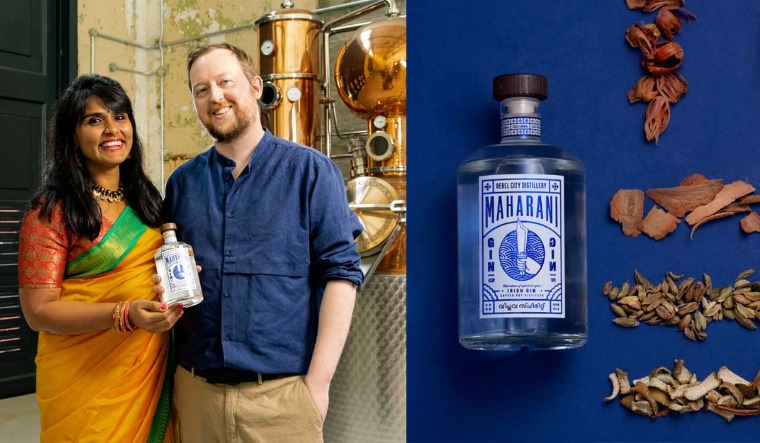 Bhagyalakshmi and her husband | Via onmanorama

It was the quest for spices that took European explorers to brave the seas and land in Kerala over 500 years ago, marking the beginning of imperialism and colonisation. In 2020, the spice scent has crossed the seas once again, this time, bottled as an Irish gin under the brand Maharani, by Bhagyalakshmi Barrett, a Keralite who co-owns Rebel City Distillery, the first distillery opened in the city of Cork in Ireland in the past 50 years.

Maharani Irish Gin, zested with pomelo fruit (known as Babloos Naranga in Kerala) and spices such as cassia and nutmeg mace, is a uniquely flavoured product. No one has so far used these spices nor this citrus-spicy magical combination in a gin.

That is not all. One can see Malayalam words—Viplava Spirit, Moksham, Alchemy and Sargathmakatha—ingrained on the indigo-hued bottle.

"For it's crafted with alchemy and artistry," says Bhagyalakshmi, in a telephone interview with onmanorama from Cork City.

Maharani, she says, is a tribute to women power.

"The brand symbolises the revolutionary, rebellious spirit of Kerala's women and their significant role in shaping up Kerala society. Viplava spirit refers to the rebel spirit in me, in all the women and in the gin," says the 34-year-old native of Kilikolloor in Kollam district of Kerala, who sources the botanicals for the distillery from Vanamoolika, a women's organic farming cooperative in Wayanad district.

"I am someone who is proud of my roots. I call myself first a Malayali and then an Indian. It has been my dream that anything I work on has to involve women and stay true to my roots." Bhagyalakshmi is the daughter of Rajeev Vasavan, an actor, and Vimala, a homemaker. She has a brother, Akhil Vinayak, who works in Kuwait.

She runs the distillery with her husband, Robert Barrett, and his father, Brendan Barrett, whom the couple calls their mentor.

From Chennai to Cork, via Madrid

After starting her career as an information technology (IT) professional in Chennai, she moved to Madrid in Spain and later came to Ireland in 2013 for her masters in business administration.

"Since then, I have been here. In 2015, I joined Dell as an IT programme manager, and two years later, Robert and I got married."

They tied the knot in August 2017 at Kollam in the presence of family and friends.

Robert, a fine spirits expert who did his MSc in brewing and distilling from Scotland, has worked in distilleries and breweries in Caribbean, Vancouver, Uganda and his homeland Ireland before coming up with the plan of setting up their venture in Cork.

Cork, the rebel city of Ireland

Cork is known as the 'rebel city' for its history of numerous rebellions. And the duo paid tribute to the city by naming their company Rebel City Distillery.

"Our plan was to roll out our first product as a fusion of two cultures, just like us," says Bhagyalakshmi, who considers it a privilege that their distillery is set up in the same plant where reputed global auto-maker Henry Ford and Sons started its first dedicated automobile plant outside the US.

"When we moved in, we decided to preserve history and not make much changes to the place in the process of renovation. Even the wall paints are maintained as such. This place is a treasure trove of history. We are next opening a gin school and visiting centre where visitors will be guided through the distillation process and can prepare their own gin bottles," she says.

Launched with an initial investment of 500,000 Euros (Rs 4.39 crore) with the support of the Irish Food Board and local enterprises, the distillery is one month old and with just three staff, including her and Robert on board, they have been able to bring out 10,000 bottles of Maharani. The product is now available in stores in Germany and Sweden.

"Our primary target is the European Union market. We are planning to expand slowly to cover the US and of course, India. The reviews are overwhelming. Popular Irish food bloggers and drink enthusiasts have rated us with a score of 91 out of 100. Maharani is being served at a few Michelin-star restaurants in the UK and the responses have been great," she said.

Her company plans to collaborate with many restaurant chains and pubs after the COVID-19 crisis gets over. "Pubs and bars in Ireland remain shut these days. Once we overcome this crisis, we hope to scale up."

Maharani is currently priced at 49 Euros (Rs 4,306) per bottle, but once the global distribution plan works out, Bhagyalakshmi hopes that they can bring down the price as the production cost would come down.

Rum with ingredients from Marayoor

The couple is planning to introduce more products—white unaged rum, cask-aged rum and small batched spirits like absinthe—but the first one would be a rum with another Indian connection.

She says, "Well, the recipe for the rum is locked. All I can say now is that the main ingredients are sourced from Marayoor." (The Idukki town of Marayoor is famous for sugar cane, jaggery and sandalwood oil).

Kerala and Ireland, though both have a common ambience of greenery, are poles apart when it comes to treating a drink. "Till the age of 28, my idea about a drink was intoxication. Experience at Ireland made me realise that a drink needs to be enjoyed. In Kerala, people drink to get drunk, but here, people enjoy a drink taking hours, smelling it, letting it soak and sink in. Drinking is socialising and pubs are where people meet, where kids and family are welcome, unlike back home. But things are changing slowly. People have started appreciating their drinks. Attitude will change over time," she said.

Bhagyalakshmi and Robert had planned to visit her parents in March, but postponed it due to the global pandemic. "I can't wait to show my parents our Maharani, and I want to take this bottle to my strong women in Wayanad without whom this wouldn't have been possible. What makes Maharani special is the authentic story behind it and the distinct and well-balanced flavour, which stands out in the highly competitive gin market. Maharani is a revolution," she said.