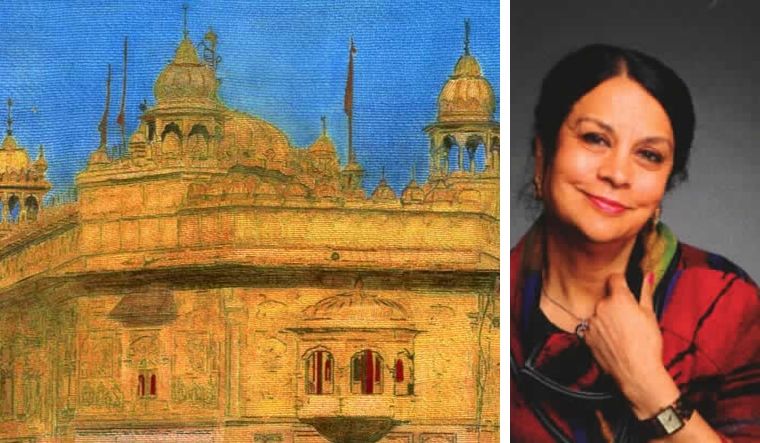 It started with a gift for her brother for his wedding. Juss Kaur was a student and didn't have much money. So, she went out, got a canvas and started to paint. “It was almost an awakening,'' she says.

Years later, this love affair continues. Kaur, who lives in Canada, has created her own brand of painting—one that blends her skill with her devotion. Each painting carries with it proof of her deep devotion as she fills each part of the canvas with tiny handwritten mantras in Gurmukhi.

“Some canvases take as long as six months,'' she says. Each year, Kaur comes to India to offer something back to the society. She teaches art in a school funded by Khalsa Aid in Patiala. Her subjects are diverse—from deep blue peacocks to a tree and Harmandir Sahib, Kaur's ideas may differ, but each painting has a meditative quality because of the mantras that she painstakingly writes across canvass, spending hours.

“It is like mediation itself,'' she says. “It becomes like simran (the act of remembering a mantra). “It is a great way of getting down and mindful of what we are here for.”

More than just the power of meditation that radiates through each painting—a force almost—it is also about the message of oneness.

Born in Nairobi, Kaur moved to UK when she was 13. The first Indian girl in an all white school, “it was brand new to me,'' she says. “My mother was not there. There were three brothers. They wanted to guide me. But being men, they couldn't.''

In East Africa, the Indian community was very close knit. Everyone lived together, and while there were whites and blacks, Kaur, really spent her time living with brown. “There was no one to guide me. They were white and black. I didn't know such a thing. Then I came to England and everyone was white,'' she laughs.

Her art reflects her spiritual journey, and her expression and her need to create really stems from her faith. While Kaur was taught Gurmukhi when she was a child in Nairobi, it is only when she got married that she finally turned to her faith again. In the UK, she stayed away. “I didn't have exposure to culture at all. There were no gurudwaras there. Even if there was one. It was far away. I didn't make an effort to do so,'' she says. Her mother went. But she stayed away. “I was in my teens. It was only when I moved to Canada that I discovered that there was a thing like gurudwaras and you must go there,'' she says.

It is in this finding of faith that Kaur seems to have also found her expression. “It is a love affair. It came back more,'' she says. And in true form. She sell her paintings and donates the money to Khalsa Aid. It is all about giving back.