What does it cost to conduct an election in India? 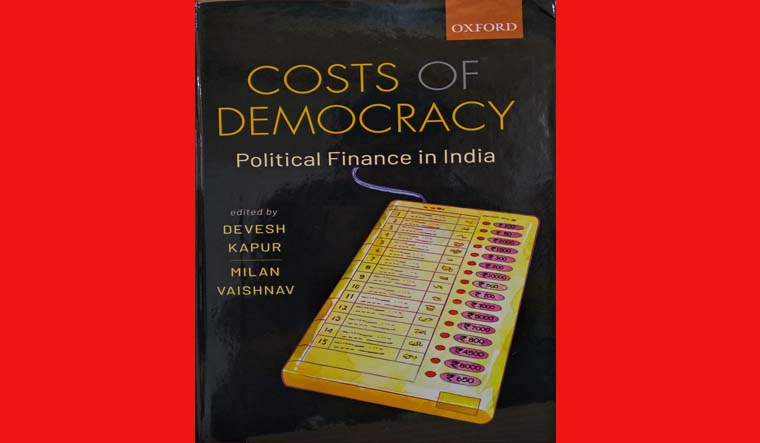 Costs of Democracy–Political Finance in India

As the spectre of general elections loom closer—not to mention the upcoming assembly elections in five states—the subject of political funding is sure to cross the minds of many. In informal conversations, debates devolve into heated political arguments. Did the BJP coffers benefit on account of the alleged Rafale scam? What of insurance companies and corporate hospitals who could try to influence the ruling party for the recently launched Ayushman Bharat health scheme?

It is at such a time that Costs of Democracy–Political Finance in India, edited by Devesh Kapur and Milan Vaishnav, has hit the stands. Vaishnav had previously authored another book on election funding in India—When Crime Pays: Money and Muscle in Indian Politics. This one is a compilation of seven essays on subjects like ‘Money in Elections’; ‘Builders, Politicians and Election Finance’ and ‘What costs so much in Indian elections?’, among others.

For those who believe that political parties sell tickets, the arguments laid out in one of the essays might just change your mind. Candidates are one of the key sources of money for elections, writes Neelanjan Sircar, calling it “self-financing”. This, he says, is on account of the parties being cash-strapped, and being rich makes candidates competitive. It renders them “winnable”. How often have party bosses asserted that tickets are awarded purely on 'winnability' factor? And the finding is that the candidate's liquid wealth actually has a “strong positive impact on his or her electoral fortunes”.

Votes are not bought. The electorate are given “gifts”. But, elections are becoming increasingly expensive because of the said “gifts” and the campaigns becoming more ambitious, sophisticated, professional, and competitive.

The editors of the compilation, along with chapter contributor Eswaran Sridharan, analyse the essays, peppering in interesting takes of their own. While targetting black money has been this government’s pet claim, with projects like the dramatic November 2016 demonetisation, cash remains the lifeblood of electoral politics. The editors point to a lack of transparency in political funding, and say reforms are not just in the interest of the public, but also the parties and the contributors.

And where does the well-regarded and powerful Election Commission of India stand in all this? The editor-authors say it has struggled mightily to regulate political finance. The government-dominated banking system and public sector contracts allow politicians and bureaucrats “to exchange regulatory or policy favours for financial contributions”. Also, poor law enforcement has hampered the transparency and disclosure laws.

They call for reforms because if a candidate, who is not wealthy, finds himself at a disadvantage at the polls, it undermines the democratic process. The opacity of funding renders generation and transmission of black money easier. More importantly, reforms are necessary to change the public perception that elections can be bought and sold.

The essays are highly readable and extensively researched. Readers will agree with much of it as they have seen and felt it all. They may also wonder how they failed to see the many points the authors make.