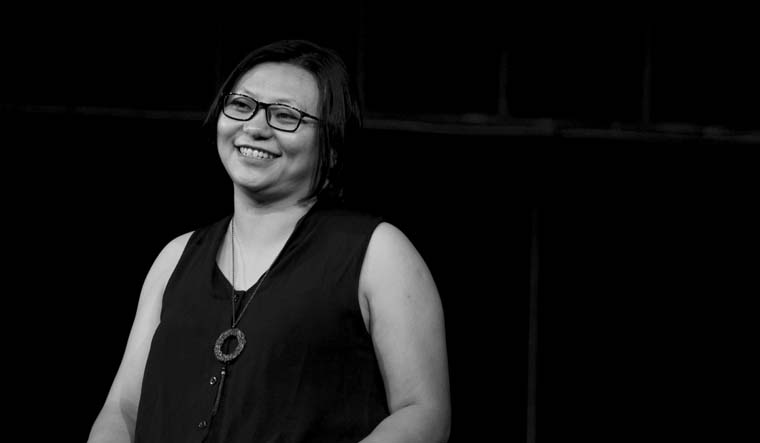 Nicky Chandam, the founder and director of Octave Foundation

Just like the mythical monster prowling in the murky depths of Scotland's Loch Ness lake, there is Poubi Lai—Manipur's cult of a giant python residing in the deep, dark recesses of Loktak lake. The legend of the python has its origin in the ancient kingdom of Moirang, one of the clans of Meitei society. The huge fabled python was considered a killing machine that wanted to destroy the kingdom, before it was hacked to death by a lethal weapon called Long (similar to a nine-headed javelin) at the hands of a fearless youth. Even today many houses in the town of Moirang, situated 45km south of Imphal, keep a "long" to ward off evil spirits.

Apparently, in 2002, Poubi Lai appeared in the dream of a Manipuri wood-carver, who was prodded to make a sculpture of the python. And thus was born a 21-foot-long likeness of the creature which is now a part of the permanent collection of Indira Gandhi Rashtriya Manav Sangrahalaya in Bhopal. The wooden carving, declared an 'Object of National Importance’, has travelled to Delhi and France in the past as a single-object exhibition.

On July 8, the Khwaab Tanha Collective and Octave Foundation will host a storytelling performance of the Poubi Lai folktale in Hindustani, at the India Habitat Centre in New Delhi. It will be one among three other adaptations of lesser-known stories from the oral traditions of Karnataka, Tamil Nadu and Kerala. Curated by writer, poet, producer, "story-seeker" and founder of Octave Foundation, Nicky Chandam, Wari-Jalsa will celebrate two years of live narration of folktales under the banner of Wari.

"The story of Poubi Lai is just five to six sentences. The main challenge was making it a 20-minute long story," says Chandam who has tweaked the popular folktale to suit the tone and tenor of contemporary Manipur, so that it appeals to a wider audience. "I wrote this story in Hindustani and put in elements which are relevant to today's Manipur," says Chandam who has no professional training in storytelling or even Urdu.

Chandam, 34, was born and raised in Manipur, but now considers herself a "Dehalvi" (resident of Delhi) after living in the city for more than a decade. She picked up Hindi quite easily, but was fascinated by Urdu. She learnt the language by listening to ghazals, attending seminars and discussions and following poets and writers from the world of Urdu literature. In the last two years she has performed in multiple cities across the country to recount long-forgotten folktales in Urdu and Hindustani. Her company Octave is a platform to bring communities from northeast India closer to the mainland through its myriad cultural initiatives.

Almost 12 years ago, Chandam, a graduate of computer applications, was about to leave Delhi for good. She was heading back to Manipur when an indefinite curfew curtailed her visit and forced her to look for another job. In 2014, she quit her job as an IT consultant with a private insurance company and took a risk to become a sort of cultural impresario."I faced a lot of racist jibes in Delhi. I wondered why people were so unhappy, angry and violent towards 'outsiders'. Perhaps because we did not know each other's stories. If we start telling each other stories, maybe we can connect better," says Chandam who has been working on adapting a popular Manipuri ballad Khamba Thoibi, an epic poem full of romance, revenge and sacrifice. She is also adapting folktales which are part of endangered languages from the Andamans, Jharkhand, Odisha and Arunachal Pradesh for the next chapter of Wari, later this year.