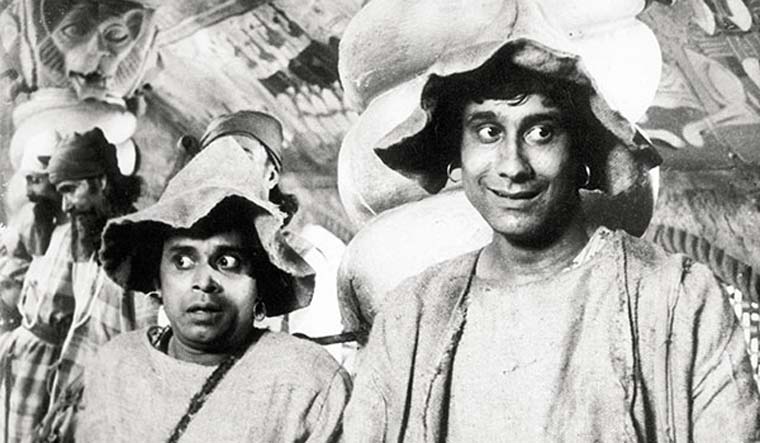 One of the greatest masterpieces of filmmaker extraordinaire Satyajit Ray is set to be remade. This will be the first Ray film to be remade by the same producing firm, Purnima Pictures.

Goopy Gyne Bagha Byne, a Bengali fantasy film and adventure comedy, was a critically acclaimed film that went on to be one of the greatest box office hits in the history of Bengali cinema.

The film, made in the year 1969, released at the time when Naxalite revolution had found its roots in the Indian soil. The film talked about two poor, landless boys—dhol-player Bagha and singer Goopy—who nursed an aspiration to become cultural movers and shakers. Unfortunately, however, they lacked the talents to do so. That is the basis of the humour in the story, clubbed with a social message of caste inequalities, deprivation and humiliation.

However, when both of them are exiled from their kingdom for earning the displeasure of the king with their dissonant music, a ghost king comes to their rescue. He grants them three boons—magic boots that would transport them instantly anywhere; unlimited food and sustenance; a beautiful voice and musical capabilities.

The duo then comes out of the exile, freeing kingdoms from war-mongering kings, giving people a voice to speak against atrocities.

The film was screened in the Berlin film festival and garnered praise as one of the most humanely documented films in the history of world cinema. Legendary Japanese film director Akira Kurosowa wrote to Ray, expressing wonder at the polyphonic beauty of his work.

The new Goopy Gyne Bagha Byne film, however, will be released in 2019, on the occasion of the original film's golden jubilee celebrations, in a new avatar. The actors' names have not yet been declared.

"The film is for the new generation as well as for those who have grown up watching Goopy-Bagha films," says director of the film, Anindya Chatterjee.

The film is based on a story by Upendrakishore Ray Chowdhury, Ray's grandfather. Arijit Dutta, the producer of the film, said, "We went ahead only after receiving the nod from Sandip Ray, Satyajit's son."

Sandip Ray said, "I have no issues as it is a modern day remake of the cult film." Says Anindya Chatterjee, "All elements of the cult GGBB shall be retained, and it is in an early stage of finalisation". However, he mentions that the music will be different.

According to Chatterjee, remaking the film will be a big challenge, as it's one of the most popular—if not the popular—movies in Bengali cinema.

Ray did a sequel to the film, Hirak Rajar Deshe, in 1980. The film was critically acclaimed and earned similar praise all over the world. But it did not enjoy GGBB's box office success.