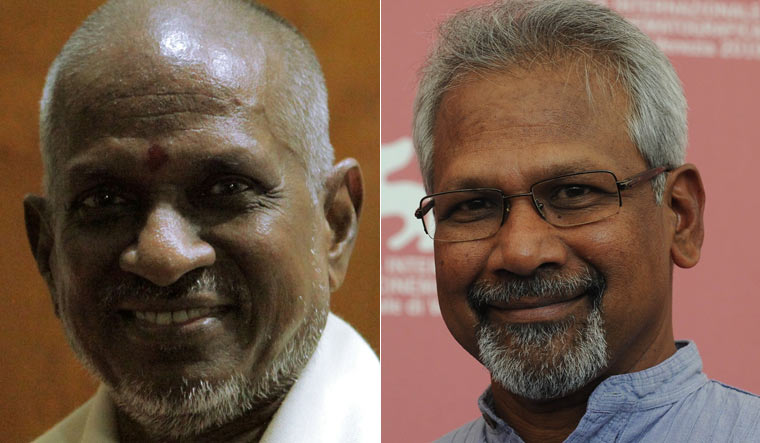 (From left) Ilaiyaraja and Mani Ratnam

'Mannavan perai cholli malligai soodi konden'.....when we listen to these lines, the first thing that comes to mind is the great combination of Ilaiyaraaja and Mani Ratnam. The song appeared in Mani Ratnam’s National Award-winning film, Mounaragam. Both music and movie lovers are in a celebratory mood. June 2 was the birthday of both Ilaiyaraaja and director Mani Ratnam, the perfect artist duo. This combination has provided us with a number of timeless hits.

Born in 1956 in Madurai, as Gopala Ratnam Subramaniam, Mani Ratnam did his Masters in business administration. His directorial debut was through the Kannada film Pallavi Anupallavi (1983) and Ilaiyaraaja directed the music for this film. The film spoke about a young man’s attraction to a woman older than him. The duo brought out some memorable hits like Anjali, Mouna Ragam, Gitanjali, and Agni Nakshatiram. The last they worked together was in Dalapathi (1991). From his next film Roja, Mani Ratnam started a collaboration with A.R. Rahman, which he continued till his latest film Kaatru Veliyidai.

Mani Ratnam was able to weave together romantic stories with social and political issues. Scenic visuals and striking music (both in background scores and songs) were an integral part of all his films.

From his very first film, Annakkili, Ilaiyaraaja was a force to reckon with in the Tamil music industry. The upbeat song 'Machaana Parthingala' trended during that time. This number, with a folksy touch, was, and still continues to be, one of the most recognisable tunes. Every song was special when it came to Ilaiyaraaja. His prodigious knowledge of Carnatic music, and instruments like guitar, renders him a “living legend”. His compositions are otherworldly. Kaalapani is another Malayalam hit, where the music was composed by Ilaiyaraaja. All songs in the movie were huge hits. The songs from the Malayalam film, Clint (2017), especially the charming song Olathin Melathaal secured a position in the hearts of people.

Songs that were born in the Mani Ratnam-Ilaiyaraaja partnership continue to remain among the favourites of music lovers. Mouna Ragam can be considered as a landmark movie in the director’s career. It was his fifth film and it won him the 34th National Film Award. All the tracks from this film were sensational. The song 'Chinna chinna vanna kuyil' speaks about the innocent wishes in the mind of a young bride. With the Ilaiyaraaja touch, the song transcends language. The duo worked in a Malayalam film too—Unaru—and the song is set in Nata raga, 'Theeram thedum olam…' from the film is a notable one. 'O Priya Priya' is a captivating song from the film Gitanjali. This mesmerising duet is sung by S.P. Balasubramaniam and Chithra (in Telugu), and the golden hues of the desert supplement the emotional atmosphere.

From Mani Ratnam’s very first movie, Ilaiyaraaja and himself have proven to be the perfect duo. They have done around 10 films together.

While we celebrate the birthday of the two great masters, movie buffs hope for another collaboration, with the magic at par with their heydays.